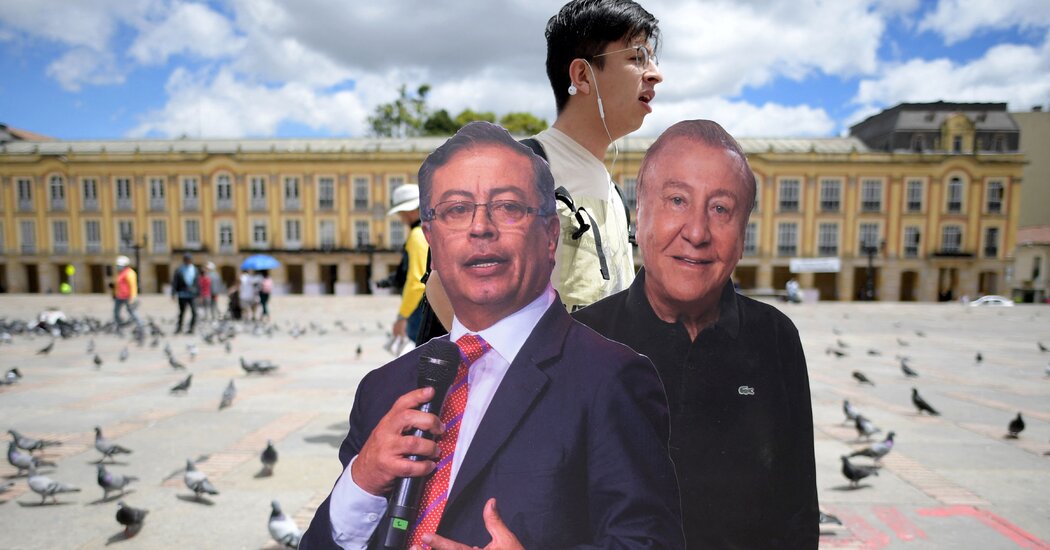 BOGOTÁ, Colombia — Last month a criminal armed group shut down much of the northern third of Colombia — largely uncontested. “We decree four days of Armed Strike from this moment,” read the May 5 pamphlet ordering the population to stay indoors, the shops to close and the roads to be empty. The Gulf Clan, a paramilitary-style drug trafficking group, initiated the strike against the Colombian government in retaliation for the capture and extradition of its leader, Dairo Antonio Úsuga, known as Otoniel, to the United States. “We are not responsible for what happens to those who do not comply,” the group warned ominously.

To emphasize their point, Gulf Clan members tagged walls in the urban centers with their initials, burned cars and buses to block roads, set up illegal checkpoints and patrolled rural areas by motorcycle. With little state police or military presence to protect the countryside, Colombians in 11 of the country’s 32 departments (similar to U.S. states) obeyed the illegal group’s orders, and a ghostly calm descended.

After four days, at least eight people had been killed, nearly 200 vehicles were burned, and many of the three million people affected were running short on food and other basic supplies. The Gulf Clan also appears to be effecting the presidential election. The group issued direct written threats to supporters of the left-wing candidate Gustavo Petro, and in rural areas where the memory of the strike lingered, community leaders said fear did suppress some voter turnout.

But perhaps because the stakes are so high, voters nationwide came to the polls at high levels for the first round of elections on May 29. Mr. Petro secured just over 40 percent of the 21 million total votes and will face off with Rodolfo Hernández, an outspoken, right-leaning real estate magnate who campaigned heavily on TikTok, in the runoff on June 19.

Though the winning candidates differ significantly on everything from social mobility to foreign policy, they share one weakness: Neither has articulated a clear plan to contain rising levels of conflict and armed violence in the countryside, like the Gulf Clan actions. As seen in higher levels of displacement, assassinations of social and community leaders, and child recruitment, security is deteriorating rapidly.

Neither Mr. Petro nor Mr. Hernández seems prepared to address the challenges of Colombia’s rural war zones. In addition to organized criminal violence from the Gulf Clan, about a dozen other armed groups prowl the country’s most vulnerable areas, seeking to control territories that provide lucrative drug trafficking routes. Colombia’s next president must move away from the state’s current approach of narrowly prioritizing captures and extraditions like the one that sparked the armed strike — that strategy fails to dismantle criminal groups but carries deep consequences for civilians.

Instead, the new president should focus on a policy that empowers Colombia’s security forces to protect civilians from the armed groups who wield de facto authority in substantial parts of the country. This, coupled with social programs and investment in the countryside, can start to turn the tide definitively toward peace.

The signing of a 2016 peace agreement between the state and the Revolutionary Armed Forces of Colombia, or FARC, has greatly reduced rural violence nationwide. But regions like Montes de María, where armed groups are taking control of parts of the country’s vast hinterland, including large areas that the FARC used to control, offer a foretaste of the reality the winning candidate will face.

When I visited Montes de María in March, it was clear that this resource-rich agricultural region was in a crisis. The Gulf Clan has aggressively expanded its presence since the peace accord, claiming lucrative trafficking routes and imposing protection taxes on the population. This armed group — like nearly all of those operating in the country today — avoids clashing with the military. Its goal is not to take over in Bogotá, but rather to suck rents out of the land and its people.

This wasn’t supposed to happen. The 2016 peace accord with the FARC chipped away at the inequalities that had empowered guerrillas and drug traffickers alike. It promised to help poor farmers growing coca — the raw material for cocaine — leave behind a livelihood that exposed them to violence. Nearly 100,000 families signed up and voluntarily ripped up their coca crops.

Yet the outgoing conservative government, led by President Iván Duque, entered office in 2018 alleging that the peace agreement was too lenient on the FARC and has focused on carrying out parts of the accord that serve its political interests — such as demobilizing the former FARC and infrastructure spending — while leaving others, like addressing land inequality and supporting coca crop substitution, to wither.

At the same time, dozens of armed groups like the Gulf Clan have proved nimble, tenacious and economically adept at capturing the opportunities afforded by the FARC’s withdrawal.

Across the countryside, armed men are forcibly recruiting children to their ranks, ripping them out of their homes and schools. Other young adults sign up willingly because, in the absence of education or jobs, fighting is the only employment on offer. “The only company whose doors are always open” is how the Gulf Clan describes itself in southern Córdoba.

The ruling political elite erroneously views these threats as disconnected from the social and economic desperation experienced by many Colombians. It is easier to pin the blame for unrest on other enemies, whether it be Venezuela, leftist guerrillas or political rivals. And indeed, rather than redressing grievances, the government’s default response has been to deploy the military.

The soldiers sent to stamp out instability know the approach isn’t working. “There is no military solution here,” a military brigade commander told me in one of Colombia’s fiercest conflict areas, suggesting that what was needed was social investment. For now, many of the government’s forces are tied down forcibly eradicating coca by ripping up the crops that are then replanted at rates estimated to reach between 50 percent and 67 percent. The military’s policy to kill and capture armed-group members only results in new recruits to immediately fill their shoes.

Put simply, the Colombian government’s flawed strategy in the countryside is partly to blame for the resurgent violence. Presidential candidates have an opportunity to shift course.

Encouragingly, both Mr. Petro and Mr. Hernández have said they will implement the 2016 peace accord, many parts of which the current government has neglected. However, neither has presented a clear plan for how to manage the deteriorating security situation for civilians. Mr. Petro, himself a former rebel, has pledged to begin a dialogue with armed groups and implement demobilization for organized crime groups like the Gulf Clan. Mr. Hernández has suggested adding the guerrilla group National Liberation Army, or ELN, to the existing accord with the FARC.

While there are some elements of a solution here, the best way to avert conflict is to protect Colombians living at the heart of the conflict, with better policing, economic opportunities and concrete reasons to trust the government.

The right kind of pressure from Washington can help. The Biden administration’s recent statement emphasizing the peace accord is important but undermined by its actions. U.S. dollars are disproportionately spent on strong-arm approaches, such as forced coca eradication, that do little to tackle the problem and exacerbate distrust of the government.

The foreboding that still haunts the streets of the country’s north is spreading too fast and too far across Colombia to ignore. The candidates and urban voters ignore these challenges at their peril. The huge stakes of the elections extend to the future of a conflict that was supposed to be over but is instead reigniting. Having ended war here once, Colombia should not allow it to erupt again.

Elizabeth Dickinson (@dickinsonbeth) is a Bogotá-based senior analyst for Colombia at the International Crisis Group. Before joining the organization in 2017, she worked for a decade as a journalist.