Opinion | In France’s Elections, Something Extraordinary Is Happening 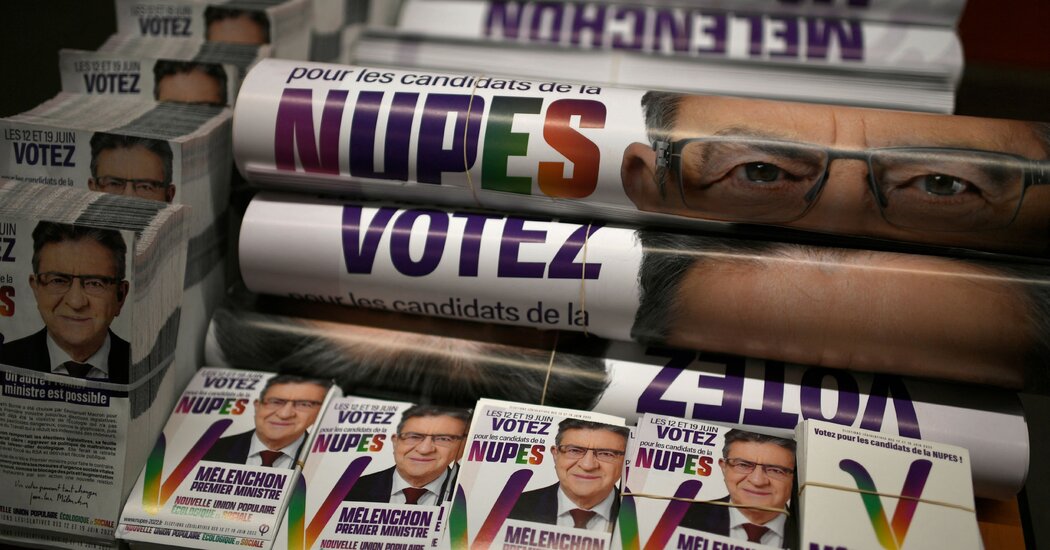 MARSEILLE, France — For much of his presidency, Emmanuel Macron has focused on the far right. At every turn he sought to neutralize its threat, alternately prioritizing some of its preferred themes and presenting himself as the only possible bulwark against it.

Now he has something else to worry about. After the first round of the country’s parliamentary elections on Sunday, the biggest challenge to Mr. Macron’s power comes not from the right but from the left. Over the next few years, it’s the other side of the spectrum that could in large part determine the country’s political direction.

That’s the result of hard-nosed pragmatism. For the first time since 1997, France’s major left-wing parties put aside their differences and ran a single slate of candidates. The coalition, known as NUPES, for Nouvelle Union Populaire Écologique et Sociale, soared last week. By securing 26 percent of the vote, earning a virtual tie with Mr. Macron’s coalition, it has an outside chance of winning an outright majority in the National Assembly after the second round of voting this Sunday. Even if that proves out of reach, the left — under a shared banner — will become the major opposition force in Parliament.

The effects will be profound. In the first place, it’s likely to reorient the terms of the national debate, bringing renewed focus to issues like funding for public services, the fight against climate change and tax justice, and put pressure on Mr. Macron. Yet the left’s advance could do more still. By striking against France’s highly personalized presidential system and the European Union’s commitment to fiscal rectitude, the coalition could shake up politics in the country and across the continent. It is, quietly, an extraordinary development.

To be sure, a stronger presence in the National Assembly would be a major accomplishment on its own for the parties involved. Thanks to the agreement between them, they’re poised to expand their current share of just 60 seats, benefiting from scores of new lawmakers from Jean-Luc Mélenchon’s France Unbowed Party and the Greens while ensuring the embattled Communists and Socialists live to see another day. Shrewdness and an instinct for self-preservation are two of the biggest factors making unity possible.

But as they conquer new ground in Parliament, the left parties may also deprive Mr. Macron of an absolute majority. If the president’s coalition is unable to capture at least 289 of the National Assembly’s 577 seats, it could be forced to govern with support from rival lawmakers — resulting in a fragile government whose fate would hinge on its ability to compromise. While Marine Le Pen’s far-right National Rally is likely to boost its parliamentary weight, France’s winner-take-all system gives an advantage to the more mainstream Republicans, who would be more natural governing partners for Mr. Macron. In any case, NUPES would be the top opposition force in Parliament.

That would make for a dramatically different political landscape than today’s, where Mr. Macron’s agenda tends to breeze through a friendly National Assembly without much resistance. In a sense, the coalition would be taking the public opposition that already exists to much of the president’s agenda and bringing it into the halls of Parliament. Mr. Macron’s plans to raise the retirement age and overhaul a low-income aid program could become trickier to realize.

And yet the possibility of a NUPES parliamentary majority cannot be ruled out either. For this to happen, the coalition needs its base to turn out in much greater numbers than it did in the first round — which featured historically low participation across the board — but especially among low-income voters and young people. If these groups do deliver a majority to NUPES, the effects would be truly seismic.

Under pressure, Mr. Macron would be forced to nominate a prime minister backed by the left-wing majority, a situation known as “cohabitation,” which entails the sharing of executive power. The three previous times this has happened under France’s Fifth Republic — in place since 1958 — presidents have broadly controlled foreign policy, but the prime minister has overseen much of the domestic agenda. The left alliance already has their man for the job, Mr. Mélenchon.

Amid tight polling and mounting anxiety, Mr. Macron and his allies have sought to tap into fears of this very scenario, reverting to red-baiting. The finance minister has likened Mr. Mélenchon to a “Gallic Chavez” who would “collectivize” the economy and bankrupt France, while a leading lawmaker from Mr. Macron’s party has warned of a “return to the Soviet era.” The chief of France’s top business lobby has said Mr. Mélenchon risks pushing the country “to the brink.”

In fact, the coalition’s actual platform is far from revolutionary. It’s inspired more by the golden days of European social democracy than by the Bolsheviks. The coalition’s two signature economic policy proposals — a hike in the minimum wage to 1,500 euros, or about $1,560, a month and a cap on the prices of essential goods — are modest measures at a time of rapidly rising inflation.

Plans to raise taxes on the superrich and boost investment in schools, hospitals and transport networks contrast with Mr. Macron’s embrace of the private sector, it’s true. Yet these are popular, standard-fare progressive policies in Europe. The alliance’s bold climate proposals — a five-year €200 billion, or nearly $209 billion, green investment plan driven by the principle of “ecological planning” — have led the ecology minister to accuse NUPES of “playing on young people’s fears.” But it’s hard to see the plans as anything other an attempt to tackle the climate crisis head-on. The costs of inaction would be much greater, anyhow.

The scaremongers are right about one thing, perhaps: An empowered left in one of the world’s most influential countries would have ripple effects abroad. It would be a source of inspiration for ideologically similar parties in Europe, which have struggled to contest for power since the heydays of Syriza in Greece and Podemos in Spain. What’s more, a French government willing to push back forcefully against the European Union’s restrictions on public spending and state intervention in the economy could encourage Brussels to evolve. As Europe struggles with the fallout from Russia’s war in Ukraine, that could be a significant development.

Yet the election’s consequences will be more immediately visible within French borders. The coalition is calling for the creation of a Sixth Republic that would rein in presidential power and return France to a more standard parliamentary regime — and the first-round results show a big chunk of the electorate agrees. Even if a change of that scope appears unlikely for now, a failure for Mr. Macron to win a clear majority just months after re-election would be more than a personal setback. It would mark a substantial blow to the office of the presidency itself, which was initially designed for the national hero and strongman Charles de Gaulle. The very structure of the Fifth Republic could come under scrutiny.

That may ultimately be one of the most powerful and lasting messages sent by French voters. In a country as complex, large and diverse as theirs, a political system designed to concentrate authority in the hands of a single head of state maybe isn’t the best way of reflecting popular will. And perhaps, after 64 years, it’s time to try something new.