Opinion | Monarch Butterflies Are In Decline. I Wanted to Help. 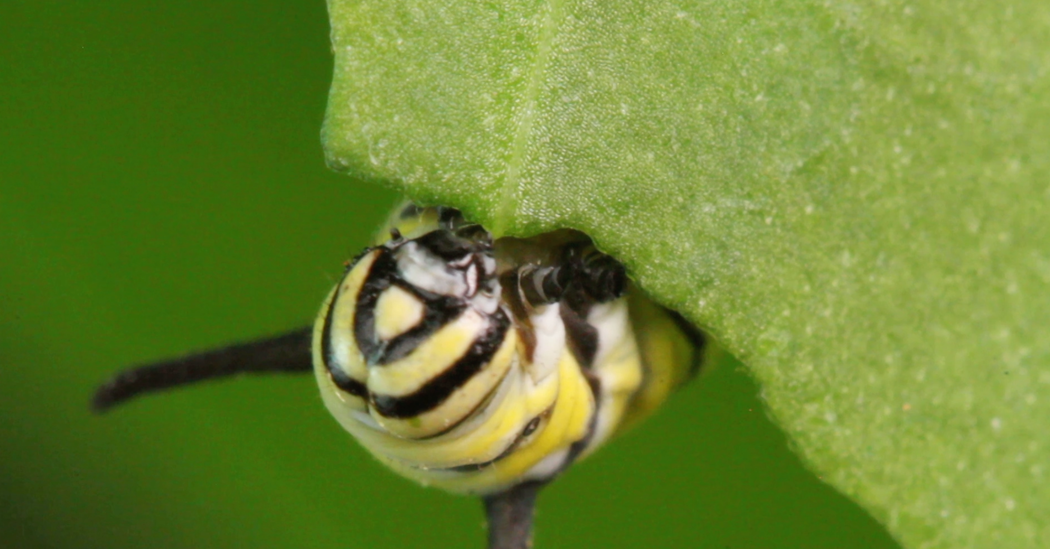 NASHVILLE — After all my blue false indigo was killed by a late frost, I went down to the garden center at the farmer’s market looking for more. Blue false indigo is a host plant of the clouded sulphur butterfly, and clouded sulphurs are the most reliable guests in my pollinator patch. I would hate to be caught short-handed when they returned in all their yellow glory. There have been so few butterflies lately.

Naturally I had to walk around the rest of the garden center, too, looking for other perennials that feed native pollinators, but the only ones on offer that day were flowers I already have in abundance. When I came upon a few pots of swamp milkweed tucked into a corner, I turned to leave. Milkweed is the host plant of the monarch butterfly, but I have plenty of milkweed.

As I was turning, something striped caught my eye. I looked closer. Monarch caterpillars were munching away on the leaves.

I also bought every caterpillar-blighted plant, worried that anybody else would simply kill the creatures eating the plants that cost $12 each. To be of use to pollinators, a garden needs two kinds of native plants: those whose flowers feed adult butterflies and those whose leaves feed caterpillars. A caterpillar in a butterfly garden is a sign that the whole hopeful plan is working.

But how many other shoppers would recognize these caterpillars as baby monarchs, or have enough milkweed in their own gardens to feed them? Milkweed is the only food monarch caterpillars can eat, and as Eric Carle taught generations of children, caterpillars are very, very hungry. Potted plants will last only a few days before being gnawed down to bare stems, but I was confident I had enough milkweed at home to see 14 baby butterflies safely into the sky.

The problem: I also have red wasps in my pollinator garden. For most of the spring it had been too cool for wasps to fly, but a wasp was patrolling the flower bed as I pulled into my driveway. Wasps hunt by dropping below blossoms, helicopter style, to check the undersides of leaves. What they are checking for is caterpillars to cut up and bring home to their own larvae.

Meanwhile, the caterpillars with the jaunty yellow and black stripes were still chewing away on the potted milkweed in the back of my car. When I opened the hatchback, they froze.

The most vulnerable time for a caterpillar is the point at which it has spun the silk button it will hang from as a chrysalis, has embedded its back legs into the silk, and is dangling upside down, trapped by a device of its own making. A dangling monarch caterpillar is very close to transforming into a chrysalis, the extraordinary jewel from which a monarch butterfly emerges. If I lean in to see how close, it will curl up tight, an “O” of fear and vulnerability.

In most cases it’s best not to interfere with natural processes, and I know that, but I stood and pondered those caterpillars anyway. Strictly speaking, these weren’t naturally occurring caterpillars. They emerged from eggs laid by wild butterflies and lived outdoors like wild caterpillars. But they hatched in a garden center on potted plants, not in a meadow filled with thousands of other caterpillars eating thousands of other milkweed leaves. In the world for which these creatures evolved, many caterpillars evade patrolling wasps. In my small pollinator garden, hardly any do.

If I were gardening for vegetables and not for pollinators, I would regard the wasps as my ally, but in truth they are neither allies nor enemies. They are simply a vital part of the ecosystem.

Anyhow, wasps are not the reason monarchs are in peril. The real explanation for the butterflies’ steep decline is an unholy trinity of pesticides, habitat loss and climate change. Since the 1990s, the Eastern monarch population of North America is down by 88 percent, and Western monarchs are down by 99 percent. Both Eastern and Western monarch populations meet the criteria for protection under the Endangered Species Act, but they aren’t listed as endangered because federal officials don’t have sufficient resources to protect them.

I’ve already done everything a regular person can do to help. I use no chemicals in my yard. I have two kinds of native milkweed to host caterpillars and dozens of native nectar flowers — with bloom times staggered across the season — to feed adults. Nevertheless, not a single monarch laid eggs in my pollinator garden last summer. And here were 14 monarch caterpillars, right in the back of my car.

So I climbed into my attic and took down the screened butterfly cage I bought when I was trying everything I could think of to help butterflies survive. I put the milkweed pots inside and hoped the plants would hold out long enough for at least some of the caterpillars to turn into chrysalides.

Ten of them made it before the milkweed leaves ran out, attaching themselves to the screen roof of the butterfly cage. I set the remaining caterpillars in the garden on a cool morning. The three largest, I believed, could find a safe spot to pupate in the densely planted garden before it was warm enough for wasps to be out. The last time I saw them they were moving deeper into the flower bed.

The smallest caterpillar stayed put on a milkweed plant right at the edge of the garden, in full view of wasps. Should I have picked the milkweed and brought it into the cage instead of taking the caterpillar into the garden? Maybe.

But a butterfly cage, which keeps caterpillars safe from predators, isn’t necessarily the safest place for a butterfly to emerge from its chrysalis: If the butterfly falls and can’t right itself, it will die. A garden provides a softer landing place in case of falls, and many footholds to help an emerging butterfly get into the right position for its wings to dry.

Monarchs emerged from all 10 of the chrysalides in my butterfly cage, but only nine of them survived. Most emerged without incident, and two fell when I was nearby to help. The third emerged not in the afternoon, the usual time, but sometime shortly after dawn. By the time I found it, upside down on the bottom of the cage, it was lost, a puddle of mangled orange wings.

This is the trouble with trying to help a natural world in so much peril. It’s never entirely clear when it’s right to intervene and when it’s wrong. The more closely we engage with nearby nature, the more these questions arise. Something as simple as hanging a bird feeder can be problematic — when a Cooper’s hawk stakes out the feeding station, for example, or when there’s a local outbreak of avian illness like Mycoplasmal conjunctivitis. Wanting to help is not the same thing as helping.

And even when the right thing to do is perfectly clear, our efforts don’t always change the outcome. The five baby bluebirds in my nest box safely fledged this spring, but within a few days only two fledglings were still following their parents around our yard. What happened to the other three? Eaten by a Cooper’s hawk? Hit by a car? I will never know.

As the ecologist Kaeli Swift writes in her recent blog post, “A letter to the broken hearted nest observer,” a terrible end is sometimes just part of the deal: “As hard as it is to watch animals get eaten, it’s vital to remember that predation is what keeps wildlife wild. It’s what keeps ecosystems complex & beautiful.”

I’ve watched a hawk carrying away a baby starling and a rat snake full of baby chickadees emerging from a nest box. I’ve seen the wasp-ravaged caterpillars in the garden. And I keep thinking of that smallest monarch caterpillar. For two hot days it was alive and well. On the third day it was gone. Did it move deeper into the milkweed patch? Find a place far from the milkweed to pupate? Either is possible. Neither is likely.

I will never know for sure, just as I have no way of knowing if the nine butterflies I released survived after they lifted from my hand. Each one flew straight up and away. They all seemed healthy and strong, but of course I can’t know that either.