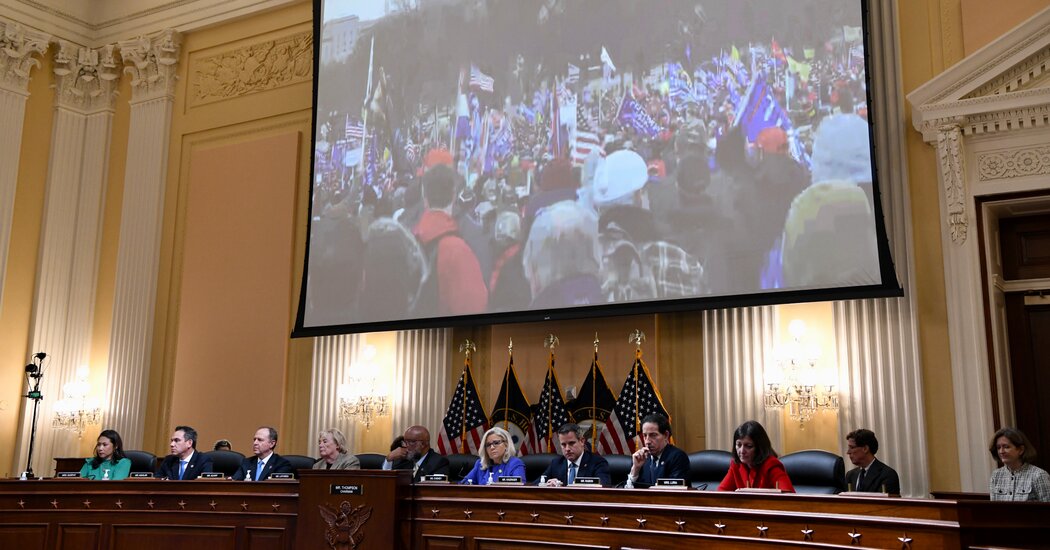 And yet, after all is said and done, will anything change the minds of those who choose not to believe what they saw and what they heard? Will ardent Donald Trump supporters in Congress finally admit to what they know happened and recognize the threat he posed to our democracy?

The facts have always been there. The committee is just putting the whole picture together. The question is, “Who is listening and watching?”

What would the Jan. 6 committee be without Liz Cheney? She is the forceful moral authority who threw away her position in the Republican Party to put her country first.

I am a Democrat. Liz Cheney is my hero. She has awakened me to what really matters: our country, our government and our Constitution. Our political differences are trivial by comparison.

Our democracy came close to stumbling into the hands of an authoritarian despot. Ms. Cheney has aggressively demanded that her party admit the truth, become part of the solution and stop perpetuating deceptions. The holdouts who malign her and still plead in favor of Donald Trump’s righteousness will be exposed for their self-serving agendas.

As someone who was a college student in May 1973 and watched every Watergate hearing on a small black-and-white TV, I find the contrast to the Jan. 6 hearing stunning. Watergate was riveting for sure. But it did not touch me like the Jan. 6 hearing.

This was visceral. There were moments when I found myself holding my breath. From William Barr, the former attorney general, contradicting the former president to Caroline Edwards’s testimony as a Capitol Police officer describing a war scene and slipping in blood, the contrast could not have been greater. Watergate, which was gigantic to me and my friends, was pablum compared to this.

My prediction is that these hearings will have zero impact. Is this the best that Congress can do? It’s sloppy and sends all the wrong messages.

Neither the live nor taped witnesses have been strong. Almost all of this was accurately reported on the day and beyond. I learned nothing new of significance.

Liz Cheney’s opening statement was the strongest element so far. Since then the thread has been lost.

I’m disappointed and saddened. This is a demonstration of the ineffectiveness and weakness of Congress. In contrast, the crazed and deluded MAGA crowd appear focused and committed, even if they’re totally wrong and seriously misled.

Jan. 6 is past and relatively well documented already. Why not focus on what needs to happen in the future? The past we can’t control. The future we can.

Re “The Jan. 6 Committee Has Already Blown It,” by David Brooks (column, June 9):

I, for one, do want to hear what the committee has learned regarding the Jan. 6 insurrection. While I agree with what Mr. Brooks is asking for — a committee devoted to rescuing and preserving American democracy — this is not the task of the Jan. 6 committee. It is the task of Congress, the Supreme Court, the media and, most of all, American citizens who care about their country.

Mr. Brooks would do much better to write about these failures than those of the committee.

David Brooks does not convince. The Jan. 6 committee is doing exactly what needs to be done: documenting for the historical record the most serious assault on America’s constitutional order since the Civil War. It is critical that this be done before (as seems likely) Republicans gain control of the House of Representatives, disband the committee and present their “alternative facts” aimed at whitewashing the insurrection.

‘Do It Now’: A Gun Owner’s Plea for Gun Control

I am a gun owner. I’ve never lived in a house that didn’t have at least one gun. My dad took a gun from an SS soldier in World War II. He taught me to shoot with that gun. He also taught me to respect the power of a firearm. He would be appalled by the lack of respect for and use of guns in our country today.

There is no excuse for having an assault weapon, high-velocity ammunition or high-capacity magazines anywhere except in a war zone.

There is no excuse for allowing anyone to carry a gun around in public without a thorough background check and extensive training.

There is no excuse for allowing people with a history of domestic or other violence to possess a gun.

The Second Amendment does not allow for indiscriminate killing of citizens in schools or houses of worship or simply going about their everyday lives.

Every country has mental illness, violent video games, lack of religious training, single-parent homes and whatever other excuse you are using today, but no other country besides the U.S. has this level of gun violence and mass murder.

There is no excuse for our lawmakers’ failure to pass laws to address these problems. Do it now.

Charlene Shafer
Cypress, Texas
The writer is a retired teacher.