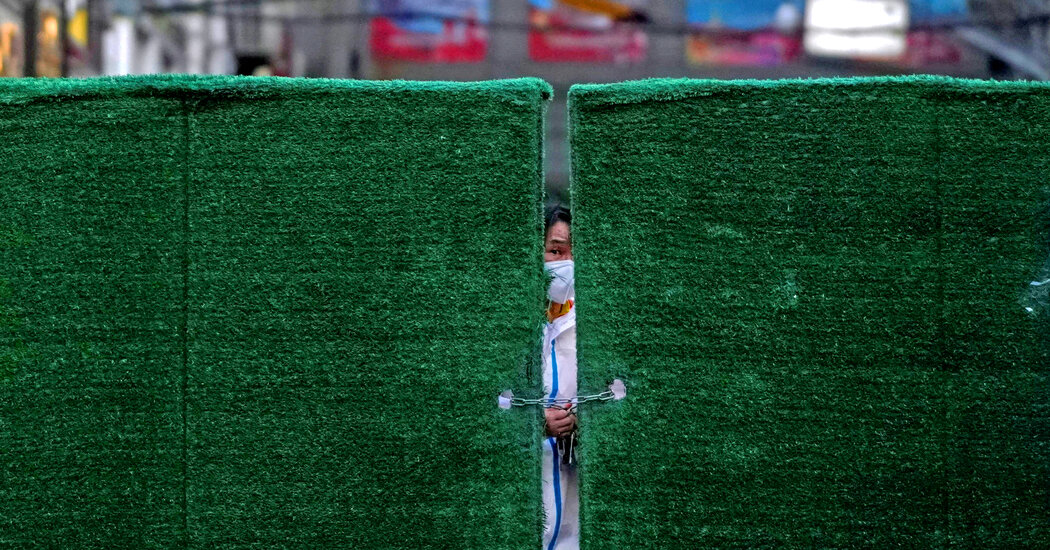 SHANGHAI — In late March, Shanghai’s government assured us that there would be no Covid lockdown. Our city, China’s largest and most vibrant, was far too important for that.

Two months of forced home confinement later, my neighbors and I were finally able to walk outside last week and feel the sun on our faces again. There were impromptu parties in the streets. People danced and drank. But shaking off our Omicron ordeal won’t be easy.

During Shanghai’s chaotic lockdown, we were shut in our apartments, incessantly swabbed and at risk of being dragged away to grim quarantine facilities by pandemic workers and police in their dreaded white P.P.E. suits. We went from no lockdown to one of the world’s strictest and longest shutdowns since the pandemic’s early days. In processing the broken promises and trauma, one thing seems clear: Something has been lost in China. Not just lost jobs, income or time or the friends who have left to avoid the next lockdown but also a loss of our shared faith in China itself.

For years, there was a sense among Chinese in our 20s and 30s that China — with its newfound strength, stability and seemingly limitless possibilities — was the place to be. I believed it, too.

I was born and raised in China but, like many of my peers, left 15 years ago to pursue the American dream. I attended graduate school in the United States, married an American and tried to settle down there. But the dream eluded me. I was still a foreigner. People would ask me questions like “What language do Chinese people speak?”

I found comfort in the Chinese students whom I advised on college admissions. A decade younger than me, they were dynamic, outspoken and imbued with the growing national confidence that has accompanied China’s economic progress. Living standards were better than ever, and China’s global influence was growing rapidly. Previous decades of Chinese chaos and backwardness had given its people an inferiority complex toward the West. That changed in this new century. Under President Xi Jinping, we were now pursuing the Chinese dream, and most of my students were opting to return home. The land of opportunity had moved east.

After eight years in the United States, my husband and I moved to Shanghai. China felt like a different country from the one I left. I turned to freelance writing — in English, because I wanted to record China’s progress for the world.

Even Covid was framed as a Chinese success story. While much of the world struggled with the pandemic, China kept its huge population mostly safe through aggressive response measures. The government made clear that this signified China’s strength, the superiority of its system. It was hard to argue with.

Omicron punctured that myth. Applying the same zero-tolerance policy to the highly contagious variant — which tends to have less severe symptoms if someone is vaccinated — caused more harm than good. With Shanghai shut down, many of us faced the prospect of running out of food for the first time in our lives, until authorities mounted an emergency supply effort. Authorities took away residents who tested positive for the coronavirus even though the vast majority were asymptomatic, separated families, soaked apartments with disinfectant and rounded up or killed pets.

Those requiring treatment for other illnesses had to go without, and a collective effort emerged online to record lives lost during the lockdown from other causes — disease, old age or suspected suicide. More than 200 made the list. Meanwhile, state-controlled media parroted Mr. Xi’s call to “put people’s lives above all else,” which sounded like a cruel joke.

Dozens of other cities also were put under full or partial lockdown. Hints of an imminent reopening repeatedly raised hopes, then faded.

Shanghai residents seethed. They banged pots and pans in protest and chanted for food and to be let out. Some clashed with the police and health workers. Many made calls to berate or plead with community officials, which were collected into a heart-rending viral video, “Voices of April.” China’s censors deleted this human document, only for others to repeatedly repost it.

These voices included regional accents of Mandarin spoken around the country, by people who had come to live and work in Shanghai. Such accents are usually markers of China’s rural-urban and socioeconomic differences. But the lockdown fostered unity in our frustration. Feeling abandoned, we coalesced in social media chat groups, sharing information or pooling efforts on bulk orders of supplies. I live in a compound with more than 6,000 residents, who previously passed one another by without a word. Without a government we could rely on, we leaned on one another.

Raised on the story line of a stronger nation led by a government that made all the right moves, most Chinese have learned to live with less attractive aspects of life here: censorship, growing surveillance and a slowing economy that is a source of worry for growing numbers of new job seekers. But the lockdown has magnified these problems. Surveillance is becoming ever more entrenched by Covid-tracking measures, and paralyzing the economy for two months — how many businesses won’t recover? — exacerbates employment fears.

The citywide lockdown is over, but are we out of the woods? The Communist Party will hold a sensitive meeting this year during which Mr. Xi is expected to extend his grip on power. Controlling Covid is essential to ensuring that all goes as planned. It’s been described as a war that must be won. Already, some Shanghai communities have been forced back into lockdown.

A younger generation whose faith has been damaged might walk the path of dissent, as happened at Tiananmen Square in 1989. That’s unlikely in today’s China. Party control is absolute; the lockdown made that clear. It’s easier to try to forget and move on. Many are simply voting with their feet. Some have fled abroad, and others are fast-tracking plans for overseas study or drawing on family or friendship ties in other countries to get out. It’s striking how quickly the land of opportunity gave way to something closer to the dark days of the Cultural Revolution, when Mao Zedong plunged China into chaos by putting radical politics and his agenda above the people.

This sense of regression will continue to drive some people away. The vast majority who stay may find it difficult to continue lending unquestioning support to a government that, when it dragged people from their homes, also snatched away their belief in a China that was moving forward.