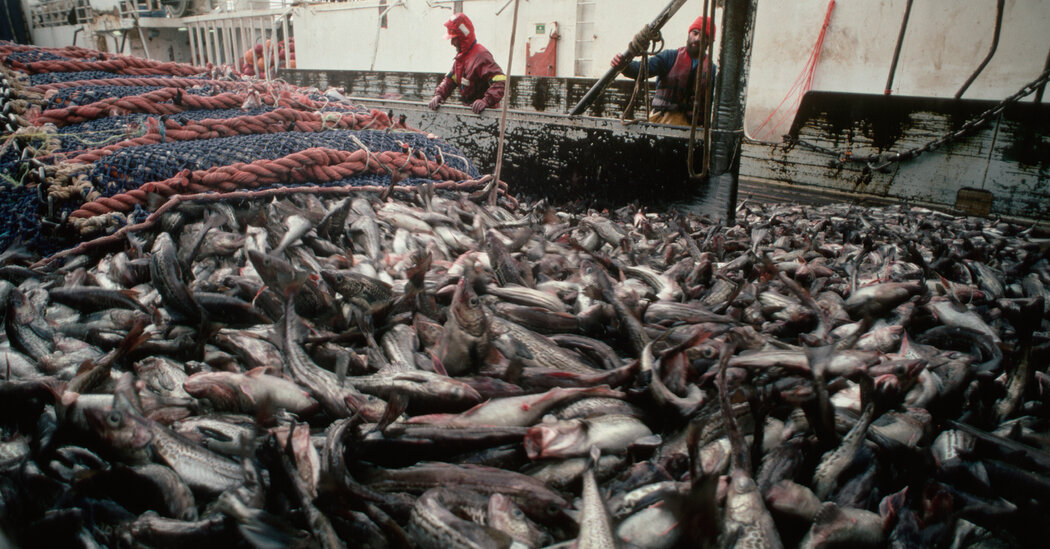 The World Trade Organization has been struggling for over two decades to reach an agreement among its members to restrict global subsidies to the fishing industry that are pushing some fish stocks to the brink of collapse. As recently as last November, trade negotiators seemed poised to rein in these subsidies, until a spike in Covid-19 delayed the deal.

Now the question is whether an agreement can still be reached when trade ministers from the W.T.O.’s members, representing most of the world’s nations, gather in Geneva for several days of meetings, beginning Sunday. The session comes as some of the world’s fish stocks continue to decline from rampant overfishing that threatens their sustainability.

Success at the W.T.O. always requires U.S. leadership. But it also will require that the world’s largest financial enablers of harmful fishing, including China and the European Union, end their devastating handouts.

These include so-called capacity enhancing subsidies for fuel, vessel construction and modernization, the building of fishing ports and processing plants, as well as foreign access agreements that allow countries to fish in other nations’ waters for a fee once they’ve depleted their domestic fish supplies. This government support enables ships to range farther, remain at sea longer and catch and process more fish than they otherwise could afford to do. Worldwide, those harmful subsidies amount to an estimated $22 billion a year, according to a study published in the journal Marine Policy in 2019.

Fisheries can be a renewable source of food and jobs, but only if they are harvested in a sustainable manner. The United Nations’ Food and Agriculture Organization estimates that 34 percent of the world’s ocean fish stocks, comprising almost a quarter of the seafood produced, are already fished to the point of being biologically unsustainable. An additional 60 percent are currently fully fished — they can’t afford a further increase in fishing. Recognizing this, some leaders from the seafood retail sector are increasingly calling for an end to harmful fisheries subsidies, to ensure the longevity of their supply chains and to respond to consumer demand for fish that is sustainably, responsibly and legally caught.

The global fish trade generated $164 billion in revenue in 2018 and accounted for nearly 40 percent of the world’s caught or farmed fish. In the United States, the commercial fishing industry employs 1.2 million people.

The most pernicious threat to fish populations is overfishing by industrial-scale fishing operations subsidized by China, Japan, South Korea, Russia and various E.U. countries. China is estimated to spend more than $5.9 billion annually on these subsidies, and E.U. members continue to spend billions of euros even while the W.T.O. negotiations have been underway.

The United States isn’t blameless. While it has been a global leader in fisheries conservation, spending around $2 billion a year on marine protected areas, monitoring and surveillance of fisheries and scientific research, it still spends approximately $1.1 billion on capacity-promoting subsidies annually, like those for fuel expenditures. If the United States redirected that billion dollars on promoting long-term sustainability, it would help push other countries to do the same and lead to higher domestic catches in the long run.

If these capacity-enhancing subsidies end, it is not certain what will happen in the short term to supply and prices. But science shows that an ambitious W.T.O. agreement could help fish populations rebound, possibly leading to lower prices. Eliminating all harmful fisheries subsidies could add 35 million metric tons of fish to the global ocean by 2050, according to research conducted by scientists at the University of California, Santa Barbara, and funded by The Pew Charitable Trusts.

As former W.T.O. ambassadors from both political parties, we worked to advance an ambitious agreement while in office. Now, the Biden administration has the opportunity to bring home a result that would benefit the global environment and U.S. fishing and seafood companies by leveling the global playing field and enhancing the long-term durability of the fishing industry.

In the W.T.O. negotiations, the U.S. needs to lead the world in reaching a deal that includes strong prohibitions on subsidies that fund illegal, unreported and unregulated fishing, as well as distant-water fishing — fishing in other countries’ waters or on the high seas just outside them. Over half of high-seas fishing grounds would be unprofitable without subsidies and low wages (in some cases unfair wages or even forced labor) that are distorting the market and artificially propping up fishing in those areas, according to a study published in the journal Science Advances in 2018.

Strong rules in a W.T.O. agreement could eliminate harmful subsidies while tackling the use of forced labor on fishing vessels — exactly the kind of environmentally and socially supportive trade paradigm that the W.T.O. should, and can, foster. A W.T.O. deal could also help enhance transparency of these subsidy programs and help hold governments accountable. As with other W.T.O. agreements, violators could be subject to legal action.

To reach a meaningful agreement, the countries parceling out big subsidies will need to move beyond their supportive statements and be willing to cut their most harmful handouts. That includes the United States. But the W.T.O. is the sum of its members. Sustained leadership by the United States will be critical — but major members such as China, the European Union, Japan and the rest must act in the interests of sustainability.