Opinion | The ‘Girlboss’ Is Out. It’s Time to Embrace the ‘Bimbo.’ 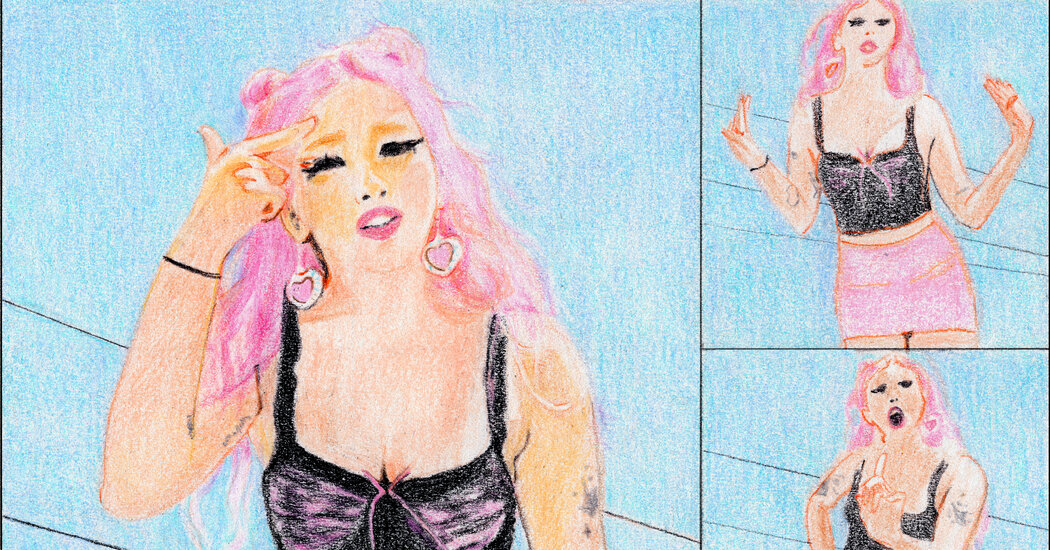 “Are you a leftist who likes to have their tits out? Do you like to flick off pro-lifers?” Chrissy Chlapecka asks the camera in a 51-second TikTok captioned “BIMBOS, RISE 💖‼️” In the video, Ms. Chlapecka, a 22-year-old comedian who lives in Chicago and has about 4.6 million TikTok followers, is wearing a tight pink minidress, a pink coat trimmed with faux fur and tall white leather boots; her bleach-blond hair is in pigtails. “Are you good at math?” she asks, scribbling “2+2=<3” into a notebook. She holds a pose while reading a book upside down. “Are you good at reading? Well if you are, how?” At the end of the video, she yells out the window: “I’m a bimbo and I’m proud!”

Ms. Chlapecka’s celebration of the much-maligned category of the “bimbo” is provocative, even shocking. In a recent phone interview, Ms. Chlapecka told me she identifies as feminist but that a lot of feminism needs to be “reworked.” Like many women of her generation, her critiques include the historical whiteness of many strains of feminism, its heteronormativity and the persistence of anti-trans voices within the movement today.

In a messy period when many are trying to redefine feminism, a wide variety of intriguing, occasionally fraught new iterations have come about. One of these is evident on #BimboTok, a corner of the internet that Ms. Chlapecka helped create. It’s a space where comedians and creators mix makeup tips with articulations of left-leaning politics. In her videos, Ms. Chlapecka’s tone is dripping with sarcasm and irony. It’s OK to wear a faux-fur hot pink bralette, she assures us, and it’s also OK if we don’t know long division or who Elon Musk is.

One might ask: How could it possibly be feminist to talk about how hot and dumb you are all the time? Women bragging that they can’t do long division has an obviously retrograde quality to it; it can play into juvenile stereotypes even as it attempts to manipulate them. Watching some of these videos can feel like peering into a series of conservative fantasies that have been ever so slightly warped: Is it really leftist for a woman to want to just go shopping and never get a job? But to dismiss this corner of the internet as totally backward would be to miss the point.

The #BimboTok sphere is a diffuse collective of creators with different ideas and personas, but generally, it’s sex-positive and sex-work-positive. It often borrows the language of social justice movements. It encourages asking the dumb questions that get to the heart of things. “I don’t know what the economy is, I don’t know what supply and demand is,” Ms. Chlapecka says in one video. “All I know is that our problems would be solved if we’d just print more money.” There’s a way in which her monologues can come to feel almost incisive — why can’t we print more money? The answer is complicated, obviously, and on some level Ms. Chlapecka knows that. “I’m asking a lot of questions that yes, I have the answer to, but are also valid,” she said. “The whole world we made is literally made up, so we can make up solutions to the issues we have.”

Ms. Chlapecka’s videos would have been unimaginable in 2016, when liberals were mourning Hillary Clinton’s loss and joining Facebook groups with names like “Pantsuit Nation.” Bimboism is the antithesis of the mode of feminism that was dominant in the 2010s, a kind of hyperambitious you-can-have-it-all feminism that can be summed up by the label “girlboss.” The girlboss was striving and succeeding in a male workplace; she was a female founder who also went to 6 a.m. yoga classes. She wore a chic dress and looked coiffed on Instagram. She was liberal and outspoken about her gender.

BimboTok came about at a time when the girlboss had more or less faded as a trendy cultural type. Amid the resurgence of leftist politics, and the disillusionment with capitalism among millennials and Gen Z, the framing of careerism and individualism as feminist rings hollow. That girlboss model was critiqued for its lack of inclusivity — its overwhelming whiteness and its focus on a level of economic success that was never attainable for a vast majority of women. Not to mention, girlboss aesthetics are simply cringe, for a generation steeped in internet irony.

And so: no more Instagrams about rising and grinding. No more The Wing. No more straining to be smarter than the boys. Bimboism offers an opposing and, to some, refreshing premise: Value me, look at me, not because I’m smart and diligent, but for the fact that I’m not. It’s anticapitalist, even anti-work. (In one video, another BimboTok comedian, @brattybarbiana, dances behind text that reads, “Rule of thumb: All relationships should be 50/50 … He works for his money, I spend it!”)

There is something compelling in the idea that women shouldn’t have to prove their economic worth or intelligence as a way of arguing for their self-worth and independence. In its most interesting form, bimboism also makes a connection between the ideas of pleasure — sexual pleasure, pleasure in clothes, pleasure in simply existing as a woman in the world with a body on display — and political gains that would make it more possible, like universal health care, student loan debt cancellation and abortion rights.

These goals are rarely framed in any kind of activist terms; we are, after all, talking about comedy videos. Humor is a crucial element, and it’s sometimes hard to distinguish the many layers of irony from reality. For Ms. Chlapecka, her bimbo persona is a bit, but it’s also a bit serious: She really does want us to look at her boobs. It’s performance of a version of her personality at high octane, one that she invites her audience to participate in themselves — have you considered that you too could be a bimbo, and that it might be fun?

Sophie Haigney is the web editor of The Paris Review.