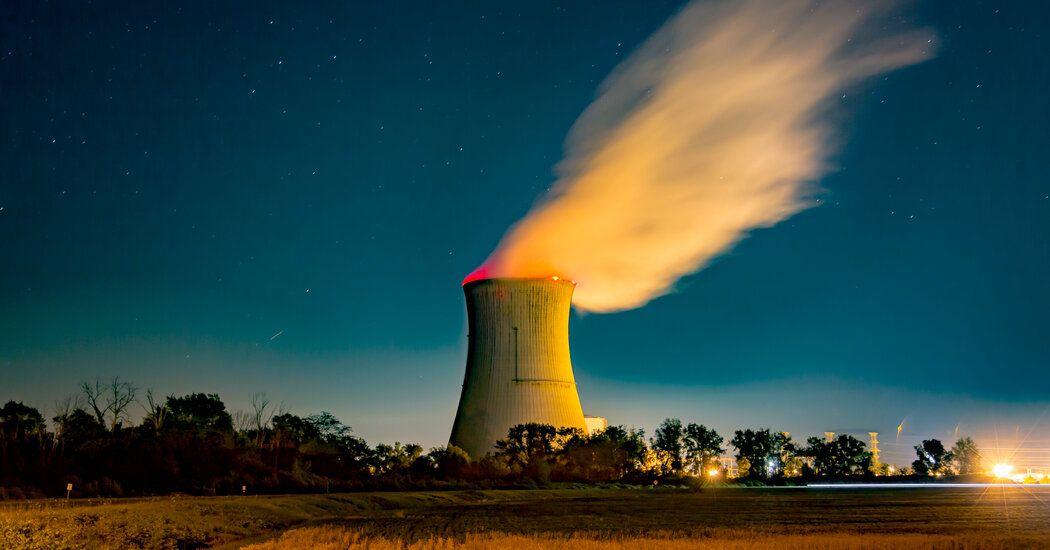 Gail Collins: Ah Bret, we agree once again. How inspiring it is to realize that even in these troubled times, Americans of all political stripes can gather to complain about the weather.

Bret: Just give this conversation another five seconds ….

Gail: And, of course, vent about Senator Joe Manchin, who keeps putting his coal-loving foot on any serious attempt to deal with climate change.

Am I moving out of our area of agreement?

Bret: Maybe a tad. I’m grateful to Manchin for fighting for American energy. We’ll all be complaining about climate change a whole lot more when diminished power generation and supply shocks leave us with rolling blackouts and long stretches without air-conditioning.

On the other hand, I mentioned in a previous conversation that I’m going to Greenland later this summer. Wasn’t kidding! An oceanographer I know pretty much wants to shove my face into a melting glacier in hopes of some kind of Damascene conversion.

Gail: Great! Then we can join hands and lobby for tax incentives that will encourage Americans to buy electric cars and encourage power companies to trade coal for wind and solar energy, right?

Bret: Wind and solar power alone will never meet demand. We should build a lot more nuclear power, which is what France is doing, again, and also extract more gas and oil in the U.S. and Canada. However, if Joe Biden also wants to help me pay for that Tesla I don’t actually need, I probably won’t say no.

Speaking of the president, I’m wishing him a speedy recovery. Is Covid something we can at last stop being freaked out about?

Gail: Clearly Biden’s in a particular risk group because of his age, but 79-year-olds who are surrounded by high-quality medical staff may not be the most endangered part of the population.

Gail: One of the biggest problems is still the folks who refused to get vaccinated. And who are still being encouraged by a number of Republican candidates for high office.

Bret: OK, confession: I’m having a harder and harder time keeping faith with vaccines that seem to be less and less effective against the new variants. How many boosters are we all supposed to get each year?

Bret: Never mind my Kamala joke, now I’m in real trouble. What were you saying about Republicans?

Gail: I was thinking about anti-vaxxers — or at least semi-anti-vaxxers — like Dan Cox, who is now the Republican nominee for Maryland governor, thanks to the endorsement of Donald Trump and about $1.16 million in TV ads paid for by the Democratic Governors Association, who think he’ll be easy to beat.

Bret: Such a shame that a state Republican Party that had one of the few remaining Republican heroes in the person of the incumbent governor, Larry Hogan, should nominate a stinker like Cox, who called Mike Pence a “traitor” for not trying to overturn the election on Jan. 6. His Democratic opponent, Wes Moore, is one of the most outstanding people I’ve ever met and could be presidential material a few years down the road.

I hope Cox loses by the widest margin in history. Of course I also said that of Trump in 2016.

Gail: Ditto. But I just hate the Democrats’ developing strategy of giving a big boost to terrible Republican candidates in order to raise their own side’s chances. It is just the kind of thing that can come back to haunt you in an era when voters have shown they’re not always freaked out by contenders who have the minor disadvantage of being crazy.

Bret: Totally agree. We should be working to revive the center. Two suggestions I have for deep-pocketed political donors: Don’t give a dime to an incumbent who has never worked on at least one meaningful bipartisan bill. And ask any political newcomer to identify one issue on which he or she breaks with party orthodoxy. If they don’t have a good answer, don’t write a check.

For instance: bail reform. My jaw hit the floor when the guy who tried to stab Representative Lee Zeldin at a campaign event in New York last week walked free after a few hours, even if he was then rearrested under a federal statute.

Gail: We semi-disagree about bail reform. I don’t think you decide who should be able to walk on the basis of the amount of money their families can put up. Anybody who’s charged with a dangerous crime should stay locked up, and the rest should go home and be ready for their day in court.

Opinion Conversation
The climate, and the world, are changing. What challenges will the future bring, and how should we respond to them?

Gail: The Lee Zeldin thing is, though, pretty shocking. Republican nominee for governor attacked during a public speaking appearance. The judge undoubtedly found a low level of serious danger — I think the assailant used a sharpened keychain, and Zeldin fought him off. But still, it was an assault on a major political candidate on the campaign trail, and you’d think it’d be treated like a damned serious charge.

Bret: This particular case sorta makes my point. His assailant was released because New York judges are barred by law from setting bail for “attempted assault,” which in this case was only nonviolent because Zeldin managed to thwart the attack. That is not a law Democrats should want to have to defend in the midterms.

Gail: Hey, we haven’t talked about Congress yet — stumbling to the wire! Any thoughts?

Bret: Well, if this Congress is remembered for nothing else, it will be for the work of the Jan. 6 special committee. The sight of Senator Josh “Fredo” Hawley running for safety is a picture that should dog the rest of his career. And there will be many former Trump voters who may have a hard time shaking the fact that Donald Trump called Mike Pence a wimp and then stood by for hours while his vice president was in mortal danger.

Gail: Very unnerving how all Pence’s parts in the story are sympathetic-to-heroic. Have to keep reminding myself that this is a guy whose idea of a public enemy is Planned Parenthood.

Bret: The other positive development is that a bipartisan group of senators has come up with a plan to overhaul the Electoral Count Act of 1887 so that it can never again be used as a flimsy excuse in an attempt to overturn the election. My only question is why rewrite the law instead of repealing it entirely? This is history you know much better than I do.

Gail Collins: Oh gosh, Bret, do you realize you’ve given me an opening to talk about Samuel Tilden?

Bret: He wuz da one who won, right?

Gail: I sorta visit with Tilden every day because there’s a very obscure statue of him about two blocks from our apartment, along a very obscure piece of parkland where I walk the dog. He was the Democratic governor of New York who, by every rational standard, was elected president in 1876. Won the popular vote by more than 250,000 but his margin of victory in the electoral vote was close and three Southern states had sent in two sets of returns.

Bret: Were there hanging chads?

Gail: The upshot, at least as we Tilden fans see it, was that a Republican-dominated Congress created an electoral commission that threw the race to Rutherford B. Hayes. The Southern votes were switched in a secret deal involving the withdrawal of federal troops who were protecting newly enfranchised Black voters. Which of course put an end to America’s first attempt at a multiracial democracy.

In response to this terrible mess, Congress created the Electoral Count Act of 1887, which was pretty terrible itself, leaving it way too easy for a disgruntled candidate to throw the whole presidential succession into crisis. You’re right that it should be repealed entirely — this bipartisan bill still leaves some unnecessary openings for complicated do-overs — but it’s an improvement and I’m kind of in the Land of Take What We Can Get.

Bret: No member of Congress should have a hand in obstructing a presidential election. Just repeal the law and let courts adjudicate future disputes. Worth remembering that not one Trump-appointed judge went along with Trump’s attempted theft.

Final question, since we’re talking about the 19th century: A new study from the University of California, Davis, finds that just over half of Americans suspect we are sliding toward a second Civil War. Do you share that fear?

Gail: Well, it’s certainly impossible not to worry, but I’m gonna give you my optimistic analysis again, just so we can go back to regular life with a jaunty step.

Gail: It’s very possible things look worse than they are because we’re experiencing a revolution in communication more dramatic than anything since the invention of a national postal service. Back then a lot of people thought they agreed with their neighbors about everything because they only had conversations about weather and crops and the marriage banns.

Then, wow — lots of hyperpartisan newspapers and pamphlets ended up in people’s hands and it turned out there were a whole lot of differences of opinion. Popular elections featured wild campaigns with tons of crazily inaccurate political charges. Then came mass media, which wanted to appeal to the, um, masses and therefore was more evenhanded. And now everybody’s online and it’s another time …

Bret: But aren’t we already back to an age of hyperpartisanship? In healthy democracies, the fringe bends toward the center. In our democracy, the center always seems to be lurching toward the fringe. That can’t end well, can it?

Gail: There’s no issue like slavery out there so profound it can’t be resolved without armed conflict. We just have to live with a lot of noisy people trying to get attention by making nutty arguments.

Bret: It would be nice to get more people of different views in the habit of conversation, not attempted annihilation.