Opinion | We Know How America Got Such a Corporate-Friendly Court 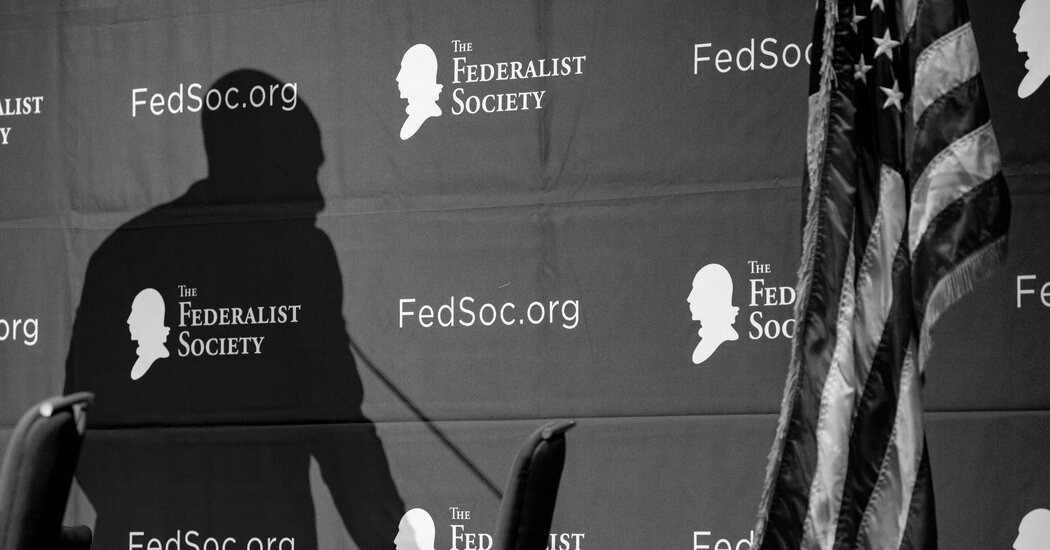 With the potential overturning of Roe v. Wade, the Federalist Society appears poised for a triumph. This organization of conservative and libertarian lawyers and law professors and students turns 40 this year.

Yet contrary to progressive perceptions, the society’s function has not been solely, or even primarily, to roll back abortion and other elements of the sexual revolution. If you look at the full scope of its activities, you will notice that a far more important mission has been to mount an economic revolution of its own, on behalf of corporations and other powerful market actors.

The Federalist Society has become a judicial pipeline of the Republican Party, helping to supply numerous nominees to the federal bench. In the progressive imagination, the society is a secretive cabal of theocrats and cultural reactionaries. In reality, it is best understood as a professional-development club for what the writer Michael Lind calls “libertarians in robes” who shift power “from working-class voters to overclass judges.”

The society was largely one of many institutions nurtured by the right wing of the American donor class to roll back the legal and material achievements of U.S. workers dating back to the New Deal and to elevate economic deregulation to high moral and constitutional principle. In tandem, other right-of-center institutions emerged to solidify America’s status abroad as a hegemon guarding the rule of global capital against rival claimants for organizing world order.

None of this is news to leftist critics of 20th-century conservatism. But a growing number of dissidents within conservatism view these legacy institutions — not just the Federalist Society but also the Heritage Foundation, National Review Institute and others — as ultimately hostile to core commitments that ought to inform the right. These would include cultivation of republican and personal virtue that rests on common prosperity and, yes, a measure of material equality; robust social-democratic support, especially for working families, who shouldn’t have to choose between paying their bills and having children; and modesty about Washington’s role in foreign affairs.

Yet the institutions of Conservatism Inc. persist in advancing a pro-business agenda despite opposition from the large populist-right segment of the Republican rank and file. While the G.O.P. has never been a workers’ party, many of its voters are. Yet Conservatism Inc. refuses to embrace a multiethnic, working-class ethos.

Having seen the workings of institutional conservatism firsthand for several decades, we believe that the best way to understand the contemporary conservative intellectual movement is by examining the material interests that underwrite its workings and shape its mission. Those material interests aren’t all perfectly in agreement with one another, which is why the organizations in question don’t always play nice together. There are disagreements at the margins. But the North Star of all is rule by large corporate and financial power, and support for militarism and cultural aggression abroad.

The Federalist Society itself offers the best illustration of the misguided development of movement conservatism. Hot-button social questions are sometimes fiercely contested among those with ties to the society. For instance, it was Supreme Court Justice Neil Gorsuch who in 2020 led a majority of the court in ruling that sexual orientation and gender identity apply to the 1964 Civil Rights Act’s definition of sex. And Edward Whelan, an originalist stalwart, countered arguments in favor of constitutional protection of fetal personhood — the likely next stage in the anti-abortion battle if or when Roe falls.

Where the society has been supremely effective — and far more united — is in the realm of political economy. In the same decades of progressive ascendancy on cultural issues, society-certified judges on the federal bench pushed through a raft of decisions aimed at thwarting collective action by workers and government action against monopolies.

Over the past several decades, society heroes like Justice Antonin Scalia upended decades of settled law and clear congressional intent to expand the use of commercial arbitration to employment and consumer contexts. This was despite the manifest imbalance in power between the parties agreeing to arbitrate their disputes.

The conservative legal scholar Robert Bork proposed reforms to U.S. antitrust law by arguing that it should focus on “consumer welfare,” often understood to mean lower prices, even if monopoly power means a less competitive economy lorded over by a few giant companies.

The Federalist Society is not the only conservative institution to pursue a similar, pro-corporate agenda. Others, like the Heritage Foundation, the Hudson Institute and National Review Institute, also receive large sums from wealthy individuals and trusts and have similarly too often equated conservatism with a neoliberal, imperial agenda.

What does this tell us about whether the right can really be realigned with the working class? There are a number of smaller right-of-center institutions trying meaningfully to adapt, but Conservatism Inc. at best pays only lip service to working-class concerns. The largest institutions are still dedicated to inventing, often from whole cloth, as the Ronald Reagan and Newt Gingrich revolutionaries also did, a version of movement conservatism that holds at bay authentic American traditions that run counter to corporate interests.

In the republican tradition, the political economy must be embedded, with state intervention as needed, within a moral order. Yet the longstanding American tradition that fretted over compromises to civic virtue and democratic self-rule demanded by unchecked financial power and imperial expansion has very little institutional expression in today’s Conservatism Inc.

In his farewell address, in 1961, President Dwight Eisenhower warned his compatriots about just this threat: the rise of a military-industrial complex that shuts out the primacy of public order and the common good to secure the economic commitments of corporate entities. This is what the conservative movement became, the jackals of Mammon. And it is what threatens the common good of the nation.

Sohrab Ahmari is a founder and editor of the journal Compact. Patrick Deneen is a professor of political science at the University of Notre Dame. Chad Pecknold is an associate professor of systematic theology at the Catholic University of America.