Opinion | Where Is Dom Phillips? 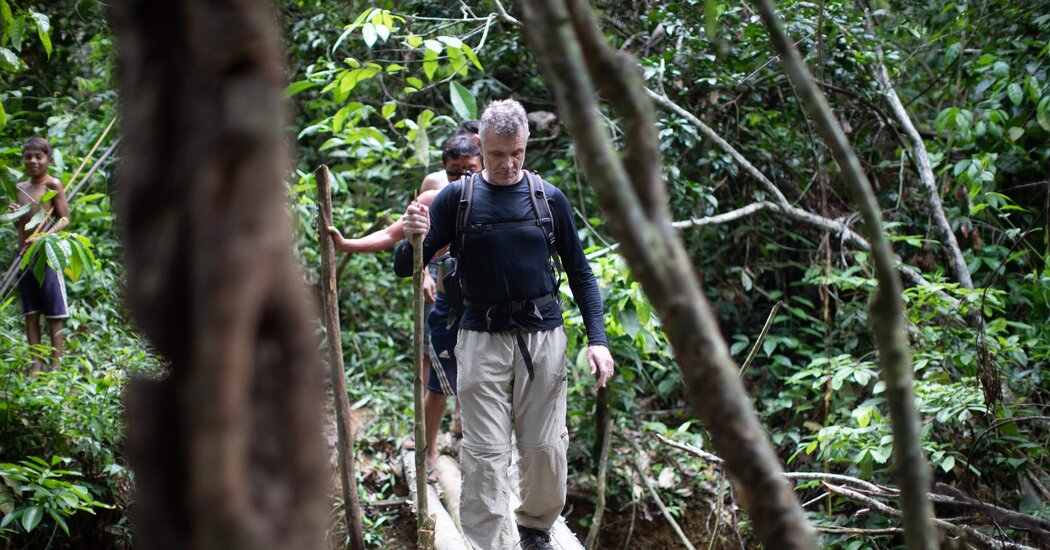 Monday began, for me, with a call that became a horror story. I discovered that Dom Phillips, a British journalist and friend, had disappeared a day earlier in the Javari Valley, one of the Amazon’s most dangerous regions.

I knew Dom was working on a book about the rainforest where I also live. I asked an Indigenous leader from the Javari Valley to send me a photo so I could be certain the British journalist who had disappeared was him.

When the picture appeared on my cellphone, the certainty punched me in the stomach. It was our beloved Dom, the forest embracing him in green, his sunny face declaring there’s nothing he’s afraid to show the world.

Then our pain deepened. His wife, Alessandra, and his family in England had to be told of his disappearance, as well as The Guardian, for which he was a frequent contributor. (My husband is The Guardian’s global environment editor, and Dom is one of his best friends.)

Also missing was Bruno Pereira, Dom’s traveling companion on the Itaquaí River. Bruno is a leading Brazilian Indigenous expert who had been helping Indigenous communities defend their land. In fact, Bruno was removed from his position at the federal Indigenous agency Funai in 2019, shortly after helping to make an illegal mine inoperable. He had reportedly received death threats before his disappearance over his operations against illegal fishing.

The two men were believed to be passing through an area of the Javari Valley notorious for violence and illicit logging.

As I write, Dom and Bruno are still missing. I don’t know what happened to them. They may have been killed or kidnapped. We fear they may never be found. But we know a few things. Though a search is now underway, the government was initially slow to act, making rescue efforts more difficult.

The disappearance of Dom Phillips and Bruno Pereira, and the Brazilian government’s inadequate response, are part and parcel of President Jair Bolsonaro’s unwillingness to confront the catastrophic environmental damage underway in the Amazon. And that is extremely concerning.

And since Mr. Bolsonaro came to power, he has relied on nationalist rhetoric to excuse the exploitation of the rainforest. He has scaled back environmental protections, weakened the territorial claims of the Indigenous and undermined environmental groups. By doing this, he has essentially given a greenlight to land grabbers, who have torched homes and opened fire on Indigenous people in order to stake illegal claims. Support for this destruction is also underway in the National Congress, where the president has pushed for laws to allow mining in Indigenous territory. It is not in Mr. Bolsonaro’s interest or his character to do anything for defenders of the rain forest.

Those who challenge Mr. Bolsonaro’s assertions are treated as if they are threatening sovereign territory. In 2019, when Dom asked Mr. Bolsonaro about deforestation and other environmental concerns at a news conference, he replied: “The Amazon is ours, not yours.”

I have reported on the rainforest for 25 years and have watched the rising insecurity and violence with concern.

With Dom and Bruno’s disappearance, though, the violence appears to have crossed a line. Journalists have been murdered in Amazonian cities, but they have not been murdered in the deep forest for decades. While members of Indigenous communities, leaders of other forest peoples, environmentalists and activists have been killed, criminals have generally not targeted journalists, especially foreign ones, for pragmatic reasons: It’s bad for business. It attracts more press, brings attention from authorities, and invites international scrutiny.

Only Indigenous people and a handful of troops carried out search operations initially. There were no helicopters in the air during the first, crucial days. When the alarm was sounded on Dom and Bruno’s disappearance, the Army said on Monday that it was “ready to conduct a humanitarian search-and-rescue mission; however, action will only be taken under orders from the upper echelon.” Those orders came woefully late. Mr. Bolsonaro seemed to be dismissive of Dom and Bruno’s plight — an “unrecommended adventure” he said.

The large-scale destruction of the Amazon began during Brazil’s military dictatorship (1964-1985), and it did not stop with the return of democracy. Under Mr. Bolsonaro, though, the Amazon is racing toward catastrophe. Scientists say the Amazon may be close to a tipping point, which will be reached when deforestation hits 20-25 percent It is now approaching 20 percent. If the rainforest becomes incapable of fulfilling its role as a great climate regulator, the global effects will be ruinous.

Dom Phillips and Bruno Pereira’s disappearance in the Amazon highlight the dangers facing those exposing the crisis facing Brazil’s rainforest. The global community must respond swiftly and strongly.

The 21st century’s more protracted, harder-to-win wars are the ones unfolding this very minute all across our natural life support systems — the tropical forests and the oceans, which are this world’s true centers. Unless we understand this, we may find it impossible to respond as urgently as needed to halt our race toward self-destruction. We need to fight for Dom Phillips and Bruno Pereira; when we do, we fight for all humankind.

Eliane Brum (@brumelianebrum) is a journalist and a documentary filmmaker who covers environmental issues and lives in the Amazon rainforest. She is the author of the forthcoming “Banzeiro Òkòtó: The Amazon as the Center of the World.” This essay was translated by Diane Whitty from the Portuguese.