Opinion | Wonking Out: Why Monetary Policy Has Gotten So Hard 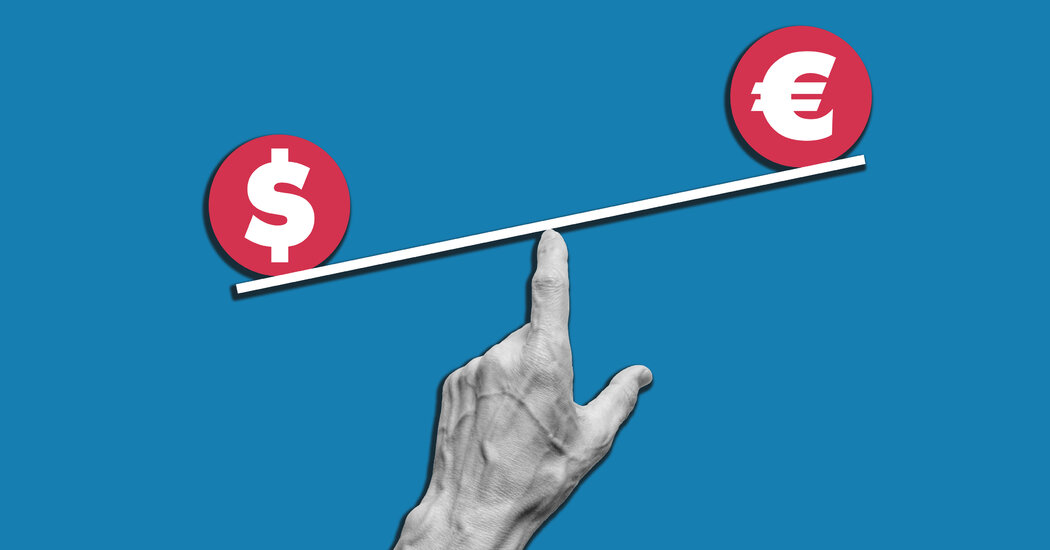 Today’s newsletter isn’t about what the Federal Reserve or its counterpart the European Central Bank should be doing. I have views, of course: For what it’s worth, I think the Fed is getting it roughly right and the E.C.B. is overreacting. But that’s a debate both huge and inconclusive; in fact, it may never be resolved, since people are so good at convincing themselves that they were right.

What I want to focus on, instead, is why the job of each central bank seems so challenging right now — why each institution seems to be facing agonizing trade-offs.

The background: For a while, inflation seemed to be largely an American problem. Yes, prices were rising in Europe too, but not as much as in the United States, and the E.C.B., unlike the Fed, wasn’t talking about raising interest rates. Recently, however, European inflation has surged, to the point that it’s basically as high as U.S. inflation.

This has led to some odd twists in the inflation debate. Some economists point to European inflation as evidence that U.S. deficit spending was never the culprit, that inflation is being driven by global forces outside the Biden administration’s control. In response, those who do blame excess spending for U.S. inflation are making exactly the same arguments about Europe that Team Transitory used to make about America: Underlying inflation remains low, it’s all about temporary shocks from pandemic recovery, the Ukraine war and so on.

This is not, by the way, a gotcha. Economic models should reach different conclusions in different circumstances. But it’s still kind of funny.

I doubt, however, that either Jerome Powell, chairman of the Fed, or Christine Lagarde, president of the E.C.B., finds the situation funny. Both face agonizing choices. Neither knows, with any confidence, how serious an inflationary threat he or she faces, and therefore how much is needed to cool down the respective economies. Nor do Powell or Lagarde have reliable estimates of how much is needed to raise interest rates, the main policy tool, to achieve a given amount of cooling.

To explain it, I keep thinking of “fine motor skills” — the hand-eye coordination that lets people tie their shoelaces and button their shirts. Well, both Powell and Lagarde are, in effect, trying to tie their shoelaces in the dark — while wearing mittens.

But here’s my question: Why wasn’t it always like this? Running the Fed has never been an easy job, of course, but it never used to seem so fraught, with so much risk of doing either too little or too much.

Well, I have an answer: The job of the Fed used to seem easier because it wasn’t taking enough risks. Specifically, it was following conservative policies (in the nonpolitical sense) that kept the economy running below its potential. This slack in the economy meant that there was little risk of a major inflationary outbreak, hence little need for major policy changes. All the Fed had to do was gently tap on the brakes if the economy seemed to be getting closer to potential or give the economy a bit more gas if it was starting to slide; not much drama was involved.

But while this conservatism gave Fed officials a relatively easy life, it came at immense cost: millions of job opportunities we could have had, trillions of dollars in output we could have produced.

It’s true that the central banks’ jobs are also getting harder because there have been big shocks, with the latest being a surge in commodity prices largely caused by Russia’s ongoing war in Ukraine. But this isn’t the first time such a shock has happened. Here’s a chart from the International Monetary Fund showing world commodity prices; focus on the black line indicating real prices:

The current shock is big no doubt, but not that much bigger than shocks in 2008 and again in 2010 to 2011, neither of which gave central banks as much agita as they’re experiencing now.

Bear in mind there were no signs of an inflationary breakout over that whole period, even though the unemployment rate eventually fell below 4 percent. This means that the Fed was consistently underestimating what the U.S. economy was capable of achieving, although its estimates gradually chased actual unemployment down. And it acted on its wrong belief: From 2016 into 2019 the Fed gradually increased interest rates, to head off imagined inflation risks.

The advantage of this conservatism for the Fed was that it insulated policymakers from embarrassment. Experience suggests that when there’s slack in the economy, the Phillips curve is very flat — or to put this in something resembling English, the inflation rate doesn’t depend much on exactly how much slack there is. So there wasn’t much risk of either deflation or painfully high inflation; to the casual observer, it always looked as if the Fed knew what it was doing.

But running the economy below its potential had huge hidden costs. Suppose that unemployment was one percentage point higher than it could have been. This meant that something like two million Americans who could have been employed — the unemployed, plus those who would have entered the labor force if the job market had been stronger — weren’t; because a point on the unemployment rate normally means about 2 points of gross domestic product, in other words, that we were forgoing about $400 billion a year of goods and services we could have been producing.

The good news is both the Fed and the E.C.B. are aware of their past sins, and they came into the pandemic determined to be less conservative and to take more risks on behalf of a strong economy. The bad news is that their timing was unfortunate: The risk of inflation did, in fact, materialize. But I’m willing to cut them a lot of, um, slack. If it never turns out that monetary policy was too loose, that means that it was consistently too tight.

And the Fed is, I’d argue, responding appropriately: In the face of evidence that the economy is overheated, it’s raising rates to cool the economy down, and despite this morning’s number, I, for one, am pretty sure we’ve reached peak inflation.

I’m less sanguine about the E.C.B. Yields on long-term bonds — which are what matter for the real economy — have risen as much in Europe as they have in the United States, indicating that markets expect the E.C.B. to tighten as much as the Fed. Yet if, as seems to be the case, European inflation reflects temporary shocks rather than an overheated economy, the E.C.B. shouldn’t be matching the Fed. So if the Fed is getting it right, the E.C.B. is overreacting.

On the other hand, Europe still has these things called unions, which have real bargaining power. So maybe Lagarde fears a wage-price spiral.

In any case, the point is that, in general, we want to see central banks facing hard decisions. The choices facing the Fed or the E.C.B. may seem easier in an economy that’s persistently a bit depressed, but making officials comfortable is not a valid policy goal.