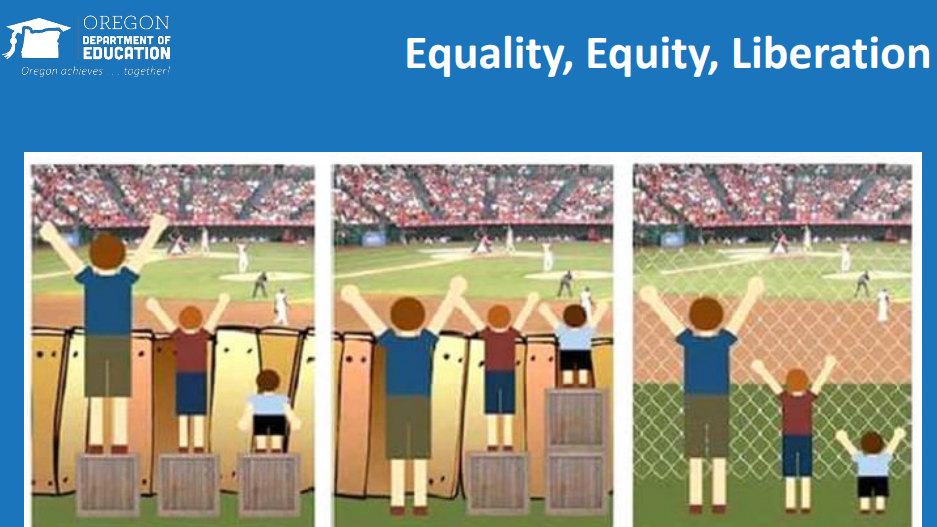 EXCLUSIVE – Oregon Department of Education’s anti-bias training accused White people of having a “thorough racist conditioning” and claimed that they need to be “re-condition[ed].”

The training included central topics in the critical race theory lens. For example, the literature in the training, reviewed by Fox News Digital, accused the U.S. of encompassing “white dominant culture.”

“For white people living in North America learning to be anti-racist is a re-education process. We must unlearn our thorough racist conditioning to re-educate and re-condition ourselves as anti-racists,” the literature from the training stated. “We are constantly tempted to detour off course by the racist propaganda of society and our own guilt and denial. In the face of society’s and our own resistance, sustaining the will to continue this journey takes bold and stubborn effort.”

The literature also accused White children of being trained to hold prejudice.

“Most of us first became aware of racial prejudice and injustice as children. As white infants, we were fed a pabulum of racist propaganda. That early ‘training’ was comprehensive and left little room for question, challenge or doubt,” the literature stated. “We resisted the lies, the deceit and the injustice of racism, but we did not have the skills to counter the poisonous messages. Our conditioning filled us with fear, suspicion and stereotypes that substituted for true knowing of people of color. We internalized our beliefs about people of color, ourselves, other white people and about being white. Those internalized attitudes became actualized into racist behavior.”

One of the sessions in the seminar asked participants to enact microaggression scenarios over what may come up in a workplace.

Racial microaggressions are defined by, according to ODE, “Commonplace verbal or behavioral indignities, whether intentional or unintentional, which communicate hostile, derogatory, or negative slights and insults.”

To deny one’s “personal racism” or role in its perpetuation is a “microinvalidation,” the training said.

Another “microinvalidation” included “statements which assert that race plays a minor role in life success,” under an umbrella title called the”Myth of Meritocracy.”

“Denial or pretense that a White person does not see color or race,” another “microinvalidation” example said.

The anti-bias training, which was launched in 2020, focused on “understanding of the institutionalized racist barriers that hinder elimination of the racial achievement disparities in our schools.” ODE told Fox News Digital that “Supporting every learner requires addressing racial equity… We know there are long-standing inequities in our systems that have led to gaps in outcomes for students of color. We emphasize culturally responsive professional learning for Oregon Department of Education staff that is reflective of all communities in our state. There is both an intellectual and ethical basis for centering equity in professional learning and instructional materials.”

Attendees were also instructed on “Unpacking the Invisible Knapsack” of “White privilege.”

The examples of White privilege included not being asked to “speak for all the people of my racial group.”

“I can be pretty sure that if I ask to talk to the ‘person in charge’ I will be [f]acing a person of my race,” ODE’s training said. “I can do well in a challenging situation without being called a credit to my race.”

“I can, if I wish, arrange to be in the company of people of my race most of the time,” it continued.

“I do not have to educate my children ot be aware of systemic racism for their own daily physical protection.”

Oregon Department of Education included a new definition of racism that included that which is ‘conscious’ and ‘unconscious.’
(Fox News Digital )

The training added that only people of color can be victims of racism because marginalized groups do not have “institutional power.”

“[T]here is a difference between being hurt and being oppressed,” it said.

After the training, employees were asked whether they have more awareness of “White dominant culture.”

The training’s literature also spoke out against color blindness.

ODE told Fox News Digital, “There is a long and painful history of racial bias in education. Students are ready for systems and institutions to change. Creating a just and equitable learning environment that embraces the history and experiences of all of its learners is not only good for students, but also for our communities and our shared future. We all must work to ensure our schools are safe, welcoming, and embracing spaces to learn for every child in our communities.”