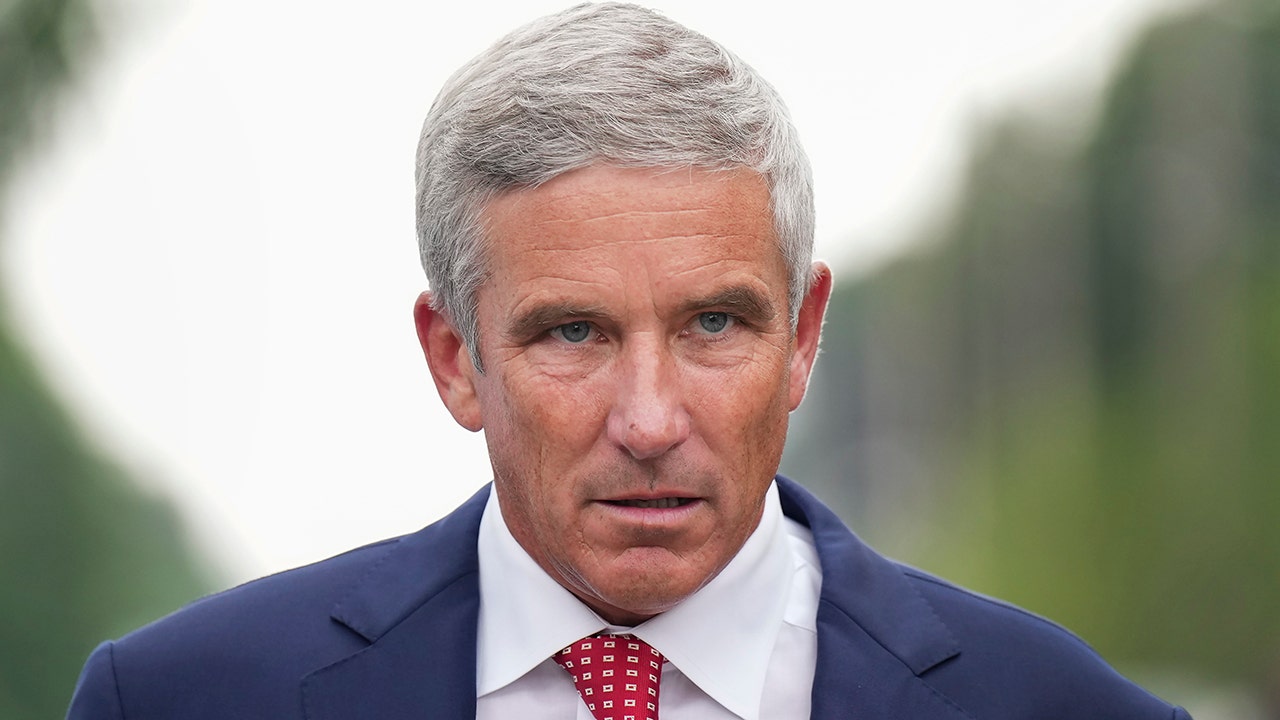 PGA Tour Commissioner Jay Monahan defended his decision to indefinitely suspend players who jumped to play for LIV Golf before the start of the RBC Canadian Open.

Monahan joined the CBS broadcast of the RBC Canadian Open Sunday. Jim Nantz asked Monahan about some of the backlash some golfers have received for joining LIV Golf, specifically pointing toward the reaction from those who survived the Sept. 11 terrorist attacks.

Players have been accused of giving into Saudi Arabia’s “sportswashing” and downplaying the kingdom’s human rights violations.

PGA Tour Commissioner Jay Monahan leaves after speaking with sports commentator Jim Nantz about the LIV Golf tour during the fourth round of the Canadian Open at St. George’s Golf and Country Club in Toronto Sunday, June 12, 2022.
(Nathan Denette/The Canadian Press via AP)

“I talked to players. I’ve had a player meeting, and I’ve talked to a number of players individually for a long period of time. And I think you’d have to be living under a rock to not know that there are significant implications,” Monahan said.

The memo to PGA Tour members was sent as LIV Golf’s first tournament teed off in London. The Saudi-backed league will feature stars like Dustin Johnson, Phil Mickelson, Kevin Na, Lee Westwood and others.

Monahan thanked those who committed to this weekend’s RBC Canadian Open and addressed his letter to “those players who have decided to turn their backs on the PGA Tour by willfully violating a regulation.”

Monahan said either these players didn’t receive releases to play in LIV Golf or didn’t apply for the releases at all.

Phil Mickelson at the 14th hole ahead of the LIV Golf Invitational at The Centurion Club June 8, 2022, in St. Albans, England.
(Chris Trotman/LIV Golf/Getty Images)

Monahan told Nantz it was his job to “protect, defend, and celebrate our loyal PGA Tour members, our partners and our fans. And that’s exactly what I did. And I don’t think it was a surprise to anybody, given how clear I had been about how we were going to handle this situation,” according to Golf Week.

Nantz asked Monahan why players couldn’t do both tours.

“Why do they need us so badly? Because those players have chosen to sign multi-year lucrative contracts to play in a series of exhibition matches against the same players over and over again,” he said. “You look at that versus what we see here today, and that’s why they need us so badly. You’ve got true, pure competition.

“The best players in the world are here at the RBC Canadian Open, with millions of fans watching, and, in this game, it’s true and pure competition that creates the profile in the presence of the world’s greatest players.

“And that’s why they need us. That’s what we do. But we’re not going to allow players to free ride off of our loyal members, the best players in the world.”

PGA Tour Commissioner Jay Monahan speaks to the media during a press conference prior to The Players Championship on the Stadium Course at TPC Sawgrass March 8, 2022, in Ponte Vedra Beach, Fla.
(Cliff Hawkins/Getty Images)

He stressed he “couldn’t be more excited about the future” and the growth of the PGA Tour.