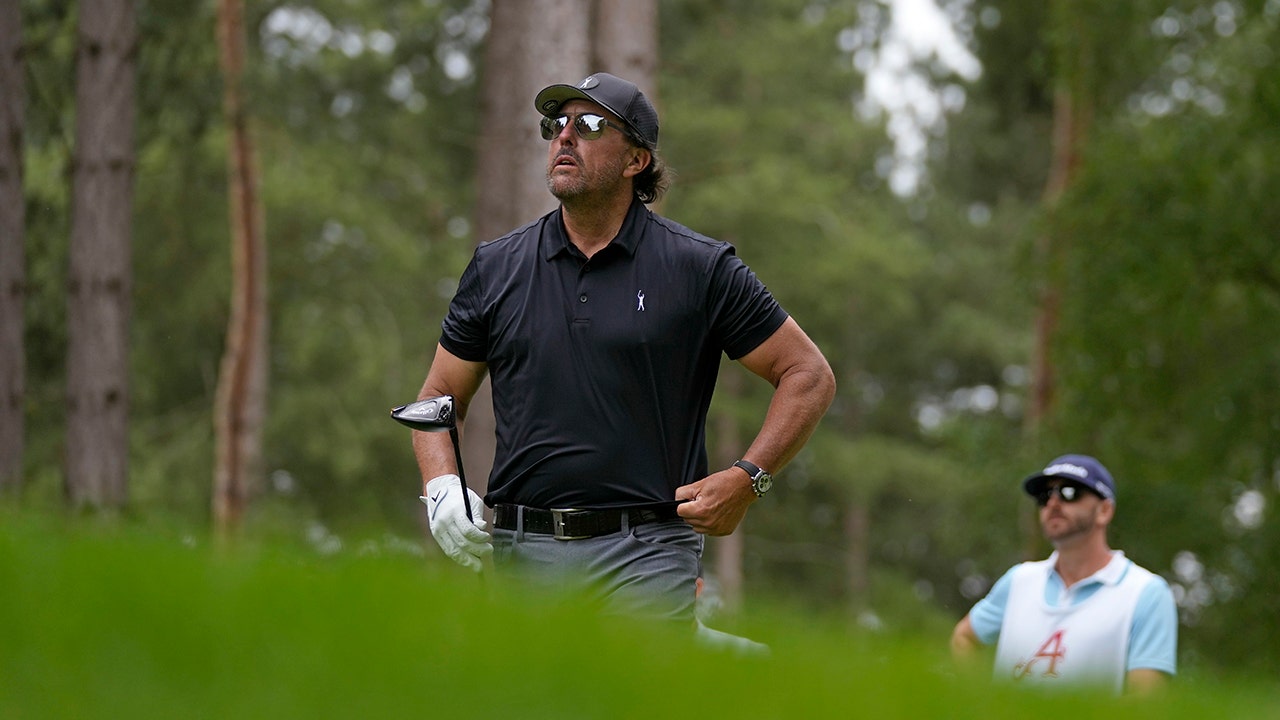 The author of an unauthorized Phil Mickelson biography said he was removed from a press conference featuring the golfer on Thursday after LIV Golf’s first-ever tournament completed its first round.

Alan Shipnuck tweeted that he was told the security guards were “acting on orders from their boss.” It wasn’t clear what the guards meant by the statement.

Phil Mickelson of the United States stands on the tee before starting the first round of the inaugural LIV Golf Invitational at the Centurion Club in St. Albans, England, Thursday, June 9, 2022.
(AP Photo/Alastair Grant)

“Well, a couple of neckless security dudes just physically removed me from Phil Mickelson’s press conference, saying they were acting on orders from their boss, whom they refused to name. (Greg Norman? MBS? Al Capone?) Never a dull moment up in here,” Shipnuck wrote.

Mickelson has been one of the biggest names to join LIV Golf in the months leading up to the first event in London. He created a firestorm in February when his comments to Shipnuck for the author’s book, “Phil: The Rip-Roaring (and Unauthorized!) Biography of Golf’s Most Colorful Superstar,” were published in excerpts to the Fire Pit Collective.

Phil Mickelson of the United States watches the flight of his ball after playing off the 4th tee during the first round of the inaugural LIV Golf Invitational at the Centurion Club in St. Albans, England, Thursday, June 9, 2022.
(AP Photo/Alastair Grant)

“They’re scary motherf—–s to get involved with,” Mickelson reportedly said. “We know they killed [Washington Post reporter Jamal] Khashoggi and have a horrible record on human rights. They execute people over there for being gay. Knowing all of this, why would I even consider it? Because this is a once-in-a-lifetime opportunity to reshape how the PGA Tour operates.

“They’ve been able to get by with manipulative, coercive, strong-arm tactics because we, the players, had no recourse. As nice a guy as [PGA Tour commissioner Jay Monahan] comes across as, unless you have leverage, he won’t do what’s right. And the Saudi money has finally given us that leverage. I’m not sure I even want [the Saudi golf league] to succeed, but just the idea of it is allowing us to get things done with the [PGA] Tour.”

Mickelson ruffled some feathers with his comments, which were seen as excusing Saudi Arabia’s involvement in Khashoggi’s murder. LIV Golf is backed by Saudi Arabia’s financial arm.

Mickelson on Wednesday apologized for the comments he made.

“I don’t condone human rights violations at all. Nobody here does, throughout the world. I’m certainly aware of what’s happened with Jamal Khashoggi, and I think it’s terrible,” he said, via ESPN. “I’ve also seen the good that the game of golf has done throughout history, and I believe that LIV Golf is going to do a lot of good for the game as well. I’m excited about this opportunity, and that’s why I’m here.”

Mickelson finished the first round Thursday 1-under par and tied for seventh place.