Pin-Ups for Vets model Janae Sergio recalls surviving homelessness before joining the Navy: ‘Be your own hero’ 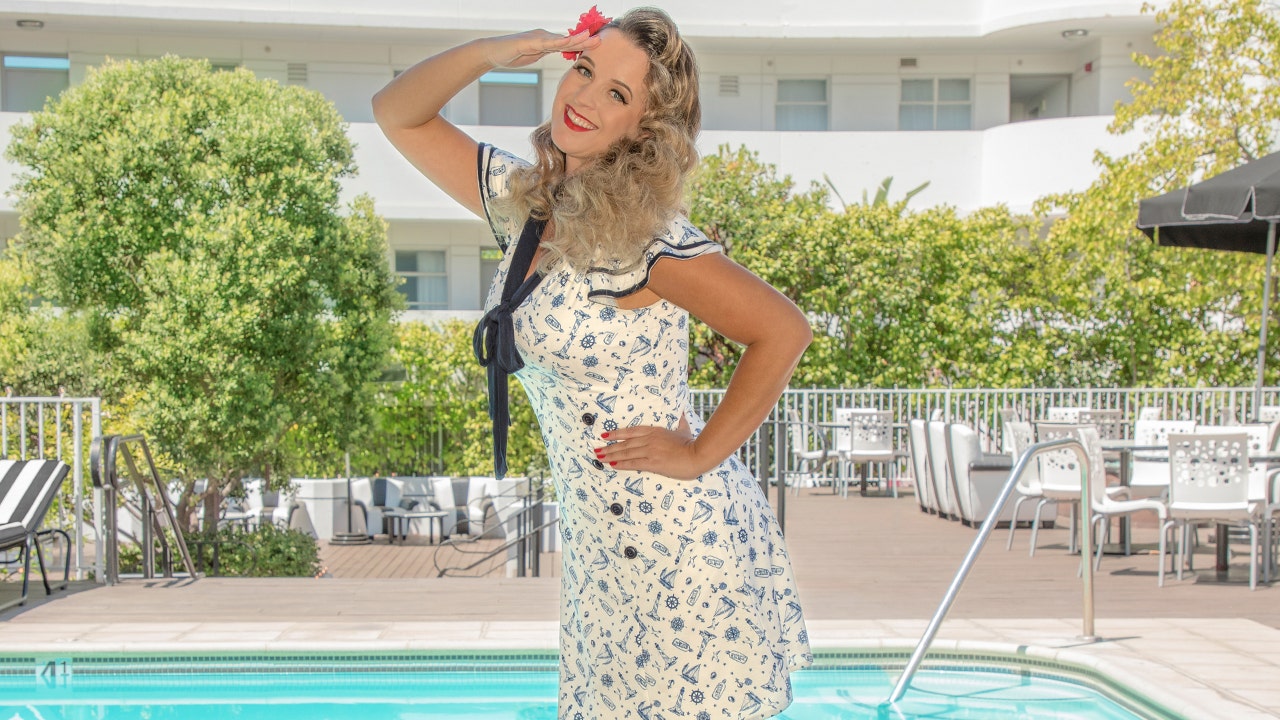 Janae Sergio’s jaw dropped when she first saw herself transformed into a ‘40s pinup – it had been a long journey for the former homeless teen who found her home in the U.S. Navy.

“It was almost an out-of-body experience,” she continued. “I remember working in a shoe store and somebody had stolen my backpack. When you’re a homeless person, that’s all you have. I remember feeling so helpless. Like I was nobody. Here I was, walking on those same streets now as an accomplished woman, here for this photoshoot. I just felt like I made it somehow.”

Since its launch, Pin-Ups for Vets has donated over $80,000 to help hospitals purchase new rehabilitation equipment and to provide financial assistance for veterans’ health care program expansion across the country. During the pandemic, Pin-Ups for Vets has been shipping out care packages enclosed with gifts of appreciation to hospitalized veterans. It continues to mail morale-boosting care packages to deployed U.S. troops around the globe.

“When I saw my photos for the first time, I thought, ‘Who is she?’” Sergio chuckled. “’She’s so pretty.’ I was so grateful for the opportunity because the foundation provides a helping hand to those in need. But what Gina does for every woman in that calendar is inexplicable. You feel empowered to tell your story. I’m forever grateful for her.”

“This is one of the most empowering veteran organizations I have ever worked with,” Sergio continued. “It raises awareness on our vets. We all volunteer to be on the calendar. It also brings together an incredible group of inspiring female veterans who are hardworking and accomplished. I’ve met so many incredible people through the organization, and it’s truly an honor to continue supporting it.”

Today, Sergio is telling her story. Recently she wrote a memoir titled “Perfectly Flawed – A Veteran’s Journey from Homeless to Hero,” which details how she went from being a 16-year-old on the streets to joining the Navy and making her mark as a successful businesswoman.

“I thought the life I was living was normal,” she reflected on her childhood. “It was around the age of 13-14 when we started going to church. I started to get to know other people who had loving families and normal households. That’s when I started to speak up against the abuse I was enduring. But it only got worse. It came to a point where my mom sent me to live with her sister, who was a veteran. My aunt wanted to keep me away from that environment, but eventually, my mom showed up with the police. My aunt begged them to please not send me back. But the police told her that my mom was my guardian.”

“That’s when my aunt went inside and told me to run,” said Sergio.

Growing up, Sergio never met her father. Her mother was a single parent by age 17. Sergio, who said she came from “two very long lines of family dysfunction,” described enduring alleged physical and verbal abuse from her mom and “her various male companions.”

“I just remember being 14, running down a hill barefooted, running from the police, running from my mom, afraid of the consequences,” Sergio explained. “It was very late at night. It was pitch black outside. I found a shopping center and hid behind one of those large potted plants. I stayed there shivering… I think the police understood the situation… But I was returned home and entered more abuse.”

Sergio said that by the time she turned 16, she was sexually assaulted. She alleged that mother did not want to deal with the situation. Consequently, she was dropped off at a homeless shelter in Hollywood, a two-and-a-half-hour drive away from home. Sergio alleged that after dropping her off, the matriarch had the charges against the person who assaulted her dropped.

Janae Sergio found herself on the streets of Hollywood at age 16.
(Courtesy of Janae Sergio)

“I wanted to escape the abuse,” said Sergio. “I wanted to escape to a safe place. I wanted to be in a loving home. On one hand, I believed this saved my life because the abuse was getting to be more aggressive. She was becoming more enraged in her beatings. In some instances, I genuinely thought I was going to die if she didn’t stop. So I was relieved to be out of that situation. But the experience of surviving on the street is almost equally traumatizing and fearful.”

“I had homeless men chase me down the street,” she continued. “There were multiple attempts to lure me into sex trafficking. There were moments when I wished my mom would come back and get me because I loved her and I wanted her to love me… I hadn’t accepted the fact that she didn’t want me. There were several instances where I reached out to her and tried to get her to come get me… As a kid, you just want your mom.”

Sergio said she went into “survival mode.” She befriended those who were on their own for far longer than she was, and they took her under their wing. She reached out to programs for at-risk youth in Los Angeles where she sought guidance and met with counselors eager to help.

PIN-UPS FOR VETS: ‘YOU CAN BE A HERO AND WEAR RED LIPSTICK’

Janae Sergio on the day she enlisted in the Navy.
(Courtesy of Janae Sergio)

“I remember in my first week, I met a girl my age,” said Sergio. “Her body was completely degraded. She had craters, she was extremely skinny. She appeared unhealthy. She had already been roped into the sex trafficking trade, and she was addicted heavily to heroin. I just remember she told me, ‘You don’t want this for yourself. Whatever you do, stay away from drugs. Stay out of this life. Just get out of here.’ I kept that at the forefront of my mind the entire time.”

Janae Sergio was amongst the first service members to be forward-deployed in support of Operation Enduring Freedom.
(Courtesy of Janae Sergio)

According to Sergio, one of her friends had joined the Navy. The friend’s recruiter, who learned about Sergio, invited the homeless teen out for lunch. An offer was made that Sergio could not refuse.

“The recruiter convinced me that I’ll always be by the ocean, and I’ll get to travel the world,” said Sergio. “These were things that I had never envisioned for myself. I had never been on a plane before. I had nothing else going for me. So I was going to give this a try. There was nothing to lose here. And it was honestly one of the best decisions of my life.”

Sergio joined the Navy in 2000 at age 18. She would be among the first service members to be forward-deployed aboard the USS John C Stennis one month after the 9/11 attacks to kick off Operation Enduring Freedom. Her Navy achievements include dual warfare certifications and four Navy and Marine Corps Achievement Medals (NAMs).

BOB HOPE’S LETTERS TO AMERICAN TROOPS DURING WWII CHRONICLED IN BOOK: IT ‘AFFECTED HIS ENTIRE LIFE’

“This is the path that God [was] was going to take me on, and I was going to be OK because I had already survived so much,” said Sergio. “… I was scared. I was nervous. But it was right after 9/11. So our pride in our country and our patriotism were extremely high. I felt like I was being called for my purpose to serve this country.”

Sergio served eight years of active duty and has served as a civilian ever since. Currently, she is Chief of Air Force Lodging, where she manages a portfolio of 88 Air Force Inns. She also launched an online boutique inspired by her love of fashion.

“When I joined the Navy, I was working at a clothing store on Melrose Boulevard,” she said. “My dream was to continue in the field… I loved serving in the military, but I never really got to follow my passion. In 2019, I gained a little bit of a social media following. I thought I had the influence to start a business. And I wanted to help other women find what works for their bodies… I wanted to show people that you can be in the military, but still have a love of fashion and embrace that. You don’t have to separate the two. I’ve been doing that for three years now. It’s been wonderful.”

Janae Sergio went on to pursue her love of fashion.
(Courtesy of Janae Sergio)

The proud wife and mom of two daughters hopes that her story will inspire others to never give up, no matter what circumstances they’re in.

“We’re all going to go through hardships in our lives,” she said. “In my book, I talk a lot about being your own hero. And it’s not that others won’t help you. But they may not be capable of helping you. So you can’t sit around and wait for someone to come rescue you… You may never get out. You can be your own hero… I want to be an inspiration to others. I believe we heal through helping others. And I do believe you can change your own story.”