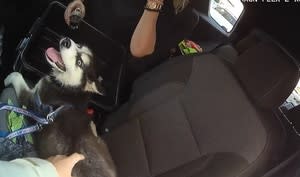 A man was arrested after law enforcement officials say they found a puppy locked in a scorching hot car that was parked at casino garage in Las Vegas.

Officers responding to a call from security at the Bellagio last week found a puppy with its mouth tape shut inside a locked vehicle, according to the Las Vegas Metropolitan Police Department.

Emergency crews went through the car’s sunroof and pulled the dog to safety.

An investigation revealed that the dog had been left in the car for about two hours without air conditioning, food, or water.

Raul Carbajal, 50, left the puppy in the car while he gambled as temperatures outside reached 113 degrees, police said.

He is facing charges including willful and malicious torture of an animal.

“Do not leave people or animals in hot cars. Period,” police reminded the public.

This is a developing story. Check back for updates as more information becomes available.