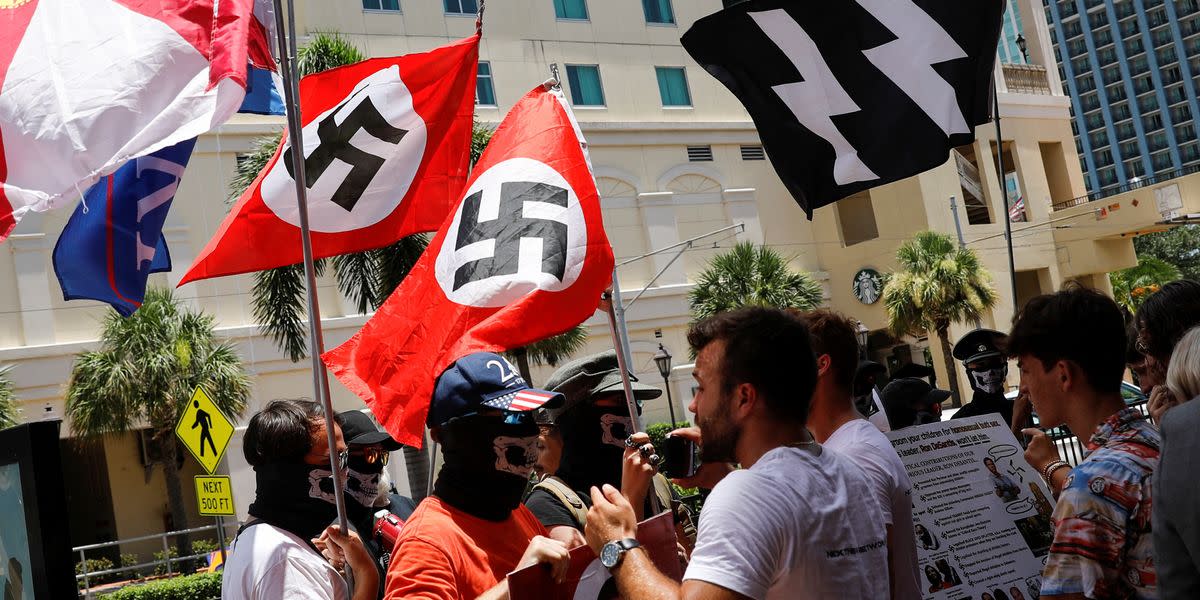 Organizers of a right-wing conference in Florida denounced a group of neo-Nazis waving swastika flags outside the gathering — but convention speaker Republican Gov. Ron DeSantis hasn’t said a word about it.

The neo-Nazis waving large red flags emblazoned with swastikas and SS symbols gathered outside the Turning Point USA Student Action Summit at the Tampa Convention Center Saturday and shouted racist slurs. They also waved the flag of Florida and another with the slogan “DeSantis Country” — along with a poster featuring DeSantis’ face.

Gaetz said in his speech that ugly women shouldn’t complain about the loss of 50 years of abortion rights in the wake of the Supreme Court’s scuttling of Roe v. Wade because they’re the “least” likely to be impregnated by apparently repulsed men.

Greene said the GOP should become a “Christian nationalist” party.

Yet a Turning Point spokesperson insisted in a statement Sunday that the group “100% condemns” neo-Nazi ideologies “in the strongest of terms.” Representative Andrew Kolvet said in a statement that neo-Nazis have “nothing to do” with the organization.

“Since these individuals were located on public property, our security attempted to, but was not permitted to remove them. We have no idea who they are or why they were here,” the statement added.

Florida Holocaust Museum chairman Mike Igel said in a statement that the neo-Nazi demonstration represented “a direct threat” to the Jewish community in the area.

“Carrying the Nazi flag, or that of the SS, the unit responsible for some of the worst atrocities of the Holocaust, is an indefensible act of pure hatred,” he added. “This isn’t about politics or religion. It’s about humanity.”

The Tampa Jewish Community Centers & Federation reached out to local and regional law enforcement, which “committed to extra patrols of Jewish institutions across Tampa,” the group said in a statement, reported WFLA-News Channel 8.

“I am asking you, Ron DeSantis, to denounce the Nazis that were here, here to celebrate your speech inside this convention center,” said Fried. “They were holding your pictures yesterday.”

DeSantis instead hailed the “freedom-loving young folks” in the “free state of Florida.”