Scenes of Devastation Emerge From a Fire-Ravaged Southwestern France 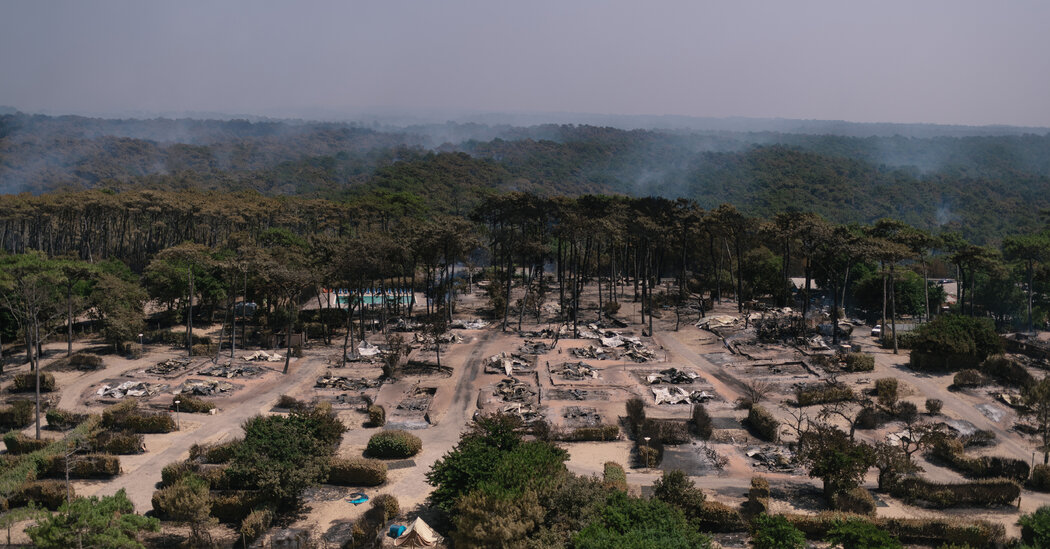 LA TESTE-DE-BUCH, France — As firefighters battled raging wildfires for the eighth consecutive day in southwest France, scenes of devastation emerged from the ashes, underscoring yet another facet of the disastrous effects of the heat wave currently sweeping Europe.

La Teste-de-Buch, a small town bordering the Arcachon Bay, has borne the brunt of wildfires that have already ravaged large stretches of land in the Gironde area of the country’s southwest. Blazes in the southern part of town have forced some 20,000 people to evacuate their homes and burned five campgrounds to ashes. All that remained on Tuesday were charred buildings, smoldering bicycles and fire-damaged fridges.

“This is a disaster,” said Christine Bertrand, a resident who was evacuated from the Miquelots neighborhood Monday night, as a thick, black cloud of smoke engulfed the area. “We never thought the fires would reach us.”

For days, the authorities have been scrambling water-bombing planes and firefighters to combat the blazes. Nearly 80 square miles of parched brush and pine forest have been burned in the Gironde area, mainly because of the wildfire in La Teste-de-Buch and a second one farther south. The fires have generated high levels of harmful ozone pollution and forced the evacuations of some 37,000 people in total.

But on Tuesday evening, local authorities were cautiously optimistic that firefighters were bringing the massive fires under control.

Fabienne Buccio, the prefect, or top state official, for Gironde, told reporters that the fires had made “far less” progress compared with previous days. She pointed to lower temperatures and higher humidity that helped firefighters contain the flames, giving them more time to set up firebreaks and prevent embers from igniting new patches of dry pine forest.

President Emmanuel Macron also praised firefighters and other emergency workers for their “exceptional and exemplary” actions over the past week, his office said in a statement, adding that on Wednesday Mr. Macron would visit areas in Gironde affected by the fires.

Still, some 2,000 firefighters were battling round the clock on Tuesday to bring the wildfires under control. Their efforts were often frustrated by gusting winds and arid conditions that helped spread the flames.

Grégory Allione, the president of France’s National Federation of Firefighters, said the second fire, near the town of Landiras, could be compared to those that consumed Australia two years ago, with its huge flames, long-lasting blazes and the massive evacuation of people it has provoked.

As in other European countries, such as Greece, Portugal and Spain, the scorching temperatures have largely contributed to the spread of fires, and climate experts have warned that global warming is likely to make this situation increasingly common.

“It’s simply unprecedented,” Mr. Allione said, noting that previous heat waves had never given rise to such intense, simultaneous wildfires. “But what’s really worrying is that all the future summers could be like this one.”

In La Teste-de-Buch, firefighters have turned the local hippodrome into a temporary headquarters, buzzing with fire trucks. Helicopters and water-bombing planes scooping up water from the Arcachon Bay frequently flew overhead, while officers reviewed color-coded maps of the blazes.

Empty buildings and houses lined the asphalt road leading to the headquarters. Police barricades set up along the way have created an eerie atmosphere in an area that only days ago was bustling with cycling tourists.

Matthieu Jomain, a spokesman for the regional firefighter unit, said the authorities were confronted with a “real powder keg” in the tinder-dry forests that cover much of the Gironde region.

A few miles from the headquarters, huge clouds of gray and red smoke billowed from the fires and had reached about 40 miles to Bordeaux on Tuesday, where a burning smell lingered in the air. Health authorities recommended that residents — especially vulnerable people, like those with respiratory ailments — stay inside and limit intense physical activity.

From the top of the Dune du Pilat — a sprawling white sand dune that is Europe’s tallest and a tourist hot spot that has now been evacuated — smoke could be seen breaking through the tinder-dry forest in dozens of places.

There have been no deaths so far, and only a handful of buildings have been damaged or destroyed by the flames, as the authorities have been preventively evacuating thousands of vacationers and residents who were potentially in the fire’s path but not immediately threatened.

Many residents have been temporarily resettled in a sprawling exhibition center a few miles from the firefighters’ headquarters. On Tuesday afternoon, a few dozen residents were milling around in the center, their faces crumpled with anxiety, between rows of cots.

Françoise Dourthe, 71, described how she had hurriedly left her home the night before, after firefighters knocked on her door. In the rush, she forgot one of her two hearing aids at home, she said, leaning her head forward to hear better.

“I closed my door, I looked at my living room and I thought, ‘Will I see you again?’” she said.

Another displaced resident, Michel Cordin, 69, said the evacuations and the smoldering campgrounds resembled “a war scene.”

Evacuation operations even reached the local Arcachon Bay Zoo, which borders the fire-ravaged forest. Eight of the zoo’s 850 animals have died because of heat and stress, but about 370 of them were evacuated on Monday in specially designed crates and trucks, according to the French association of zoological parks. Most of those were sheltered nearby in a zoo in Bordeaux’s suburbs.

The fire is “an enemy that never sleeps, that moves, that gives you no respite,” Patrick Davet, the mayor of La Teste-de-Buch, told the BFMTV news channel.

Mr. Jomain said that firefighters had turned to techniques rarely used in the area to battle the wildfires, such as pre-emptively burning land to prevent the fire from advancing, or cutting down miles-long stretches of forest to create a natural barrier.

Dozens of fire trucks lined the side of the few roads that run through the fire-ravaged area, ready to deploy to extinguish fires constantly reignited by swirling winds and to clear the roads barred by collapsed charred trunks. Bulldozers are also at work chopping down trees.

“We’re here for a long time to come,” Mr. Jomain said as wood smoldered behind him and a gray layer of ash covered the ground.

That’s all that was left at the foot of the Dune du Pilat: ash, along with a few signs of vacations abruptly cut short.

At the Camping des Flots Bleus, a campsite that had been the scene of a hit French comedy, charred bicycles were scattered around the place and flip-flops were still stored in a small closet.

At another campsite nearby, the concrete foundations were all that was left of most buildings. Charred tables and chairs sat on a terrace. A soda machine was still smoldering in the middle of what had most likely been a bar, with what looked like carbonized bottles of beer and wine stacked on shelves behind it.

The only thing that had truly survived the fire? The swimming pool.