Sean Hannity: Biden is doing ‘exactly’ what he promised with the fossil fuel industry 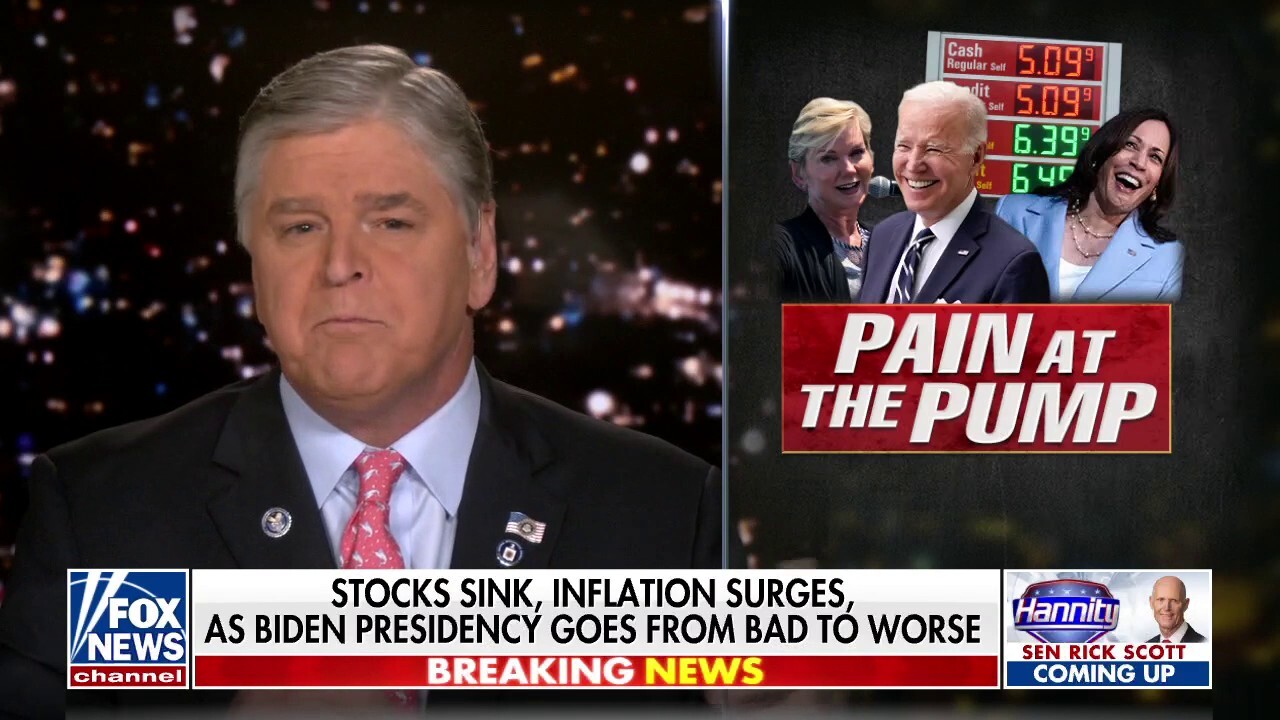 Sean Hannity showcased the various occasions Biden announced he had plans to put an end to the oil and gas industry on “Hannity.”

SEAN HANNITY: WE ARE SUFFERING THROUGH YET ANOTHER ANTI-TRUMP SMEAR

SEAN HANNITY: In fact, gas prices now have hit new record highs for 17 consecutive days, no end in sight. The national average for a gallon of gas is now well over $5 a gallon, $5.10. By the way, diesel, that costs even more. Now, despite what Biden and his administration would have you believe, there’s no mystery surrounding why we have spiking gas prices. Let’s begin with a very important reminder. When someone tells you you know something, especially on the campaign trail, believe them. Two years ago on the campaign trail, Joe Biden, well, when he wasn’t hiding in his bunker, told us that he was a climate warrior. He said he was a card-carrying member of the climate alarmists cult. He vowed to destroy the oil and gas industry and even threatened to throw oil executives in jail. He openly dreamed of a Green New Deal and promised to move away from fossil fuels altogether, even if that meant sacrificing high-paying career jobs in the energy sector in the process. And even if it caused Americans, you, the American people, deep financial pain, which we are now all experiencing. And then there was this exchange between Biden and then President Trump during a debate.

Is everybody remembering now? Because President Trump was right in that moment, Joe Biden said exactly what he was going to do. And it wasn’t the first time. Over and over again on the campaign trail when he’d leave his basement. Biden promised to transition away from fossil fuels regardless of what the consequences would be.

Now you’re wondering why you’re paying on average, $5.10 for a gallon of gasoline. Well, when you artificially reduce the world supply of the lifeblood of our economy, oil and gas, and at a time when demand is actually growing, well, prices go up. That’s simple economics 101. You don’t need a Harvard business degree to figure it out. At the time, President Trump predicted exactly what would happen. And what is exactly happening right now.

Oh, but of course, the feigned outrage over those mean tweets. I’ll take the mean tweets and $2 a gallon gasoline any day. Now, of course, after the election, Biden did exactly what he promised to do. He killed off the Keystone XL pipeline. Well, he did give a waiver to the Nord Stream two pipeline for Vladimir Putin. I guess probably payback for all the business that Hunter and Russia did together. Now, he also banned drilling in Anwar. He paused all new oil and gas permits on federal lands. He restricted fracking. He slowed down production with a slew of. Burdensome regulations. And while he curbed domestic production, he’s now more than happy to beg other countries for oil, including some of America’s worst enemies.