She’s In Prison For Raping Two Teen Boys, And She’s In Videos On TikTok 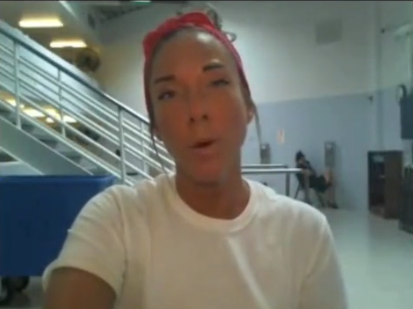 There are TikTok videos from ex-prisoners who answer questions about what life was like behind bars.

There are TikTok videos that get millions of views by showing people’s courtroom reactions as they’re sentenced to prison.

And then there are TikTok videos from people actually inside prison right now.

#PrisonTok can be a source for good, whether by shining light on inhumane conditions or by simply engaging a curious public with the realities of the criminal justice system. But in recent days, it has been receiving new and darker attention following a story from the Idaho Statesman newspaper published on Friday about one local prisoner’s new TikTok account.

Miriah Vanlith, 43, went viral on the platform when she appeared in a video asking for people to write to her at the South Idaho Correctional Institution near Boise.

Vanlith was convicted in 2019 of raping two teenage boys, enticing children over the internet, and distributing a controlled substance to a minor. She raped one 14-year-old boy in 2018 while out on bond for having sexually abused a 15-year-old boy and raping a 17-year-old boy the year before. (The charges related to the 15-year-old were dropped as part of a guilty plea deal). Prison records show she won’t be eligible for parole until 2028.

Prisoners don’t have standard access to the internet, but using a for-profit communications platform called JPay, Vanlith was able to send a video message to someone on the outside, who then posted the clips to a TikTok account on her behalf and in her name.

That’s where one video blew up and received more than 3 million views. The Vanlith account soon had more than 33,000 followers — and has since been shut down. (A TikTok spokesperson did not respond to a request for comment on whether the company had removed the account or if the person behind the account had taken it down).

Vanlith’s videos were subsequently stitched by people who were shocked that a prisoner could appear in a TikTok video or disgusted that a convicted sex offender could go viral.

Writing to the Idaho Statesman (via paid emails sent through JPay), Vanlith said the videos were an attempt to get new pen pals in order to pass the time behind bars, but she declined to say who had helped her set up an account. “I made BIG mistakes in the past, but that doesn’t define who I am,” Vanlith told the Statesman. “I’ve learned and grown a lot in the last five years. I take responsibility for what I’ve done. The past doesn’t define me, and I’ve started a new chapter of my life.”

While it was somewhat unique for Vanlith to have an account set up for her while she was incarcerated, it’s not uncommon for videos to be shared to TikTok featuring incarcerated people asking for pen pals. In fact, there are multiple accounts that are wholly dedicated to sharing prisoners’ JPay videos, essentially serving as the 2022 social media version of websites that have been around much longer. “This is a page strictly to post content regarding men behind bars who need love!” reads the description for the account @inmatesneedlove.

JPay has been around since 2001, according to its website, and charges both people in prison and their loved ones in order to communicate with one another. By using a prisoner’s ID number, people can send money or email them, while incarcerated people can share short “videograms” through JPay kiosks located inside the jails. People in prison can even purchase JPay tablets that don’t offer full internet access but on which they can pay to download games or music.

Fees vary, but at the South Idaho Correctional Institution, it costs two “stamps” to send or receive a videogram like the one Vanlith sent, with five stamps available for purchase for $2. That may not sound like much, but remember, even incarcerated people who are able to work while behind bars are paid very little.

Jesse Crosson, who served 19 years for robbery and shooting two people and now answers questions about prison life on his TikTok account @second_chancer, has railed against JPay in multiple videos. In one video entitled “Prison Profiteering,” Crosson said he and his family each spent more than $20 a month on JPay email stamps — a huge fraction of the $54 per month he was earning in his prison job. His middle class family could help support him, but not everyone is so lucky. “The problem is someone is profiting off every phone call, every email, and every bar of soap sold, and that is disproportionately affecting those who have the least,” Cronson said.

“[JPay] are just a small piece of the multi-billion dollar prison industrial complex in this country,” Crosson said in another video.

A JPay spokesperson said they could not provide a full statement prior to publication. “We acknowledge the criticism we receive, but please also look at the positive pieces about our tablet program,” spokesperson Jade Trombetta wrote in a brief email, sharing a link to a Yahoo piece about JPay’s parent company, Aventiv Technologies.

Vanlith told the Statesman that she’s received more than 500 new contacts since her videos blew up, but Idaho Department of Correction spokesperson Jeff Ray told the newspaper that people should think twice about becoming a prison pen pal.

“While many pen-pal-type relationships are well-intended,” Ray said, “people who choose to engage in them — including those who are incarcerated — should be wary.”