The ‘Double Closet’: Why Some Bisexual People Struggle With Mental Health 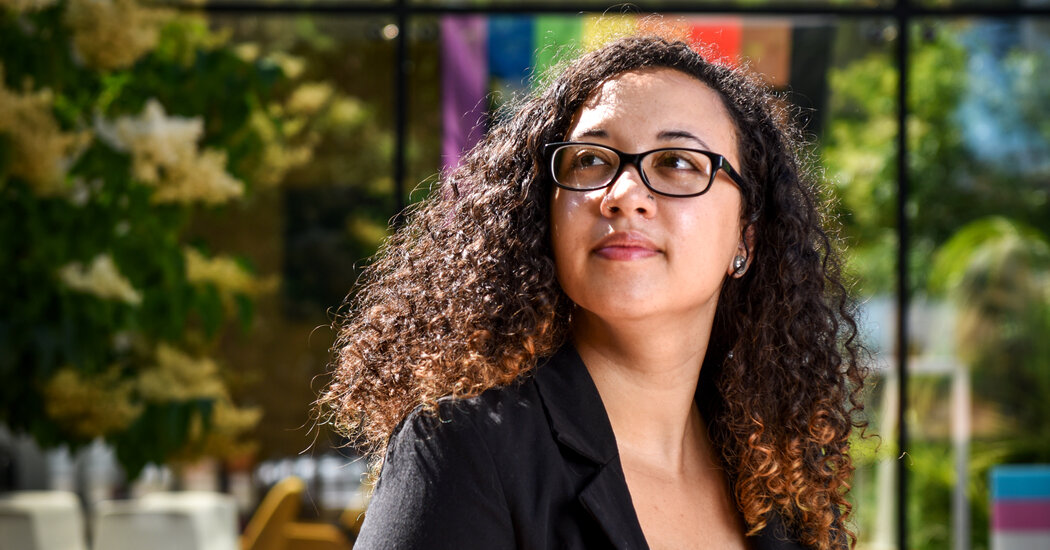 When Brooke Lindley was 13 and first came out to her family as being attracted to both boys and girls, she didn’t even know the term “bisexual.” It was 2003, and her parents responded dubiously. “Just wait ’til you get a boyfriend,” she remembered her mother saying.

A few years later, Ms. Lindley did get a boyfriend, but she found she was still also attracted to women. She would print bisexual fan fiction and read it at night, thinking to herself, “This is totally me.” Still, she said, her father told her she was just confused. High school friends who had come out to her as gay didn’t believe her when she told them that she was bisexual, citing her past relationships with men.

“My anxiety was always so high, because I was like, ‘I don’t understand, I don’t understand,’” she said. She felt like her queerness alienated her from her straight friends, and her relationships with men prevented her from fully relating to her gay friends. She didn’t know where she fit in, or how she should define herself.

Now, at 30, Ms. Lindley thinks the biphobia she experienced after coming out has contributed to her current and past struggles with anxiety and depression. And even though the number of people who identify as bisexual is rising in the United States — from about 1 percent of adults in 2008 to about 3 percent of them in 2021; with more than half of the adult L.G.B.T. population identifying as bisexual, according to a recent Gallup poll — the stigma still remains.

“Bisexual folks experience stigma not only from heterosexual communities, but also from — even though they’re named in it — the L.G.B.T.Q. community,” said Jessica N. Fish, a researcher at the University of Maryland School of Public Health who studies L.G.B.T.Q. well-being. “The stereotypes of confusion, that it’s a phase, that they’re promiscuous, those perpetuate on both sides. That can be really influential on someone’s mental health.”

‘The more anti-bisexual experiences someone has, the worse their health can be.’

Understanding the mental health experiences of bisexual people is challenging, Dr. Fish and other experts said, because the research is limited and tends to focus on younger, single people — especially women. That said, some studies suggest that they may be suffering a disproportionate amount.

A 2017 review of 52 studies, for instance, found that when compared with heterosexual people, bisexual people had higher rates of depression and anxiety, and higher or equivalent rates of those conditions when compared with those who identified as gay. A 2019 research brief from the Trevor Project, a national organization providing crisis intervention and suicide prevention services to L.G.B.T.Q. people under 25, concluded something similar among America’s youth: Bisexual high school students reported more feelings of sadness and hopelessness and more thoughts of suicide than those who identified as heterosexual or gay.

There’s also some evidence that bisexual people fared worse than their heterosexual and gay counterparts during the pandemic, including greater stress, loneliness, psychological distress and fatigue; and poorer mental and physical health than those identifying as straight or gay.

This disparity is often a result of the prejudices bisexual people face, Dr. Fish said, with one study from 2019 suggesting that a big form of discrimination is “identity invalidation” — or the idea that your sexuality is not valid, or is ignored. The study found that much of this discrimination often comes from gay and lesbian people, followed by family members and straight people; and can directly impact bisexual people’s mental health, including contributing to depression, stress and exacerbated or triggered anxiety (including panic attacks and post-traumatic stress disorder).

“We see it in research that the more anti-bisexual experiences someone has, the worse their health can be,” said Tania Israel, a psychology professor who studies L.G.B.T.Q. health at the University of California, Santa Barbara.

Ethan Mereish, a psychologist and associate professor of health studies at American University in Washington, D.C., said that this kind of discrimination from in and beyond the queer community can create “a double closet” that can discourage bisexual people from coming out, in part because they may worry they won’t find a welcoming community.

It can also create a hostile social environment, which in turn can contribute to mental health disorders, said Ilan H. Meyer, a public policy scholar at the Williams Institute at the U.C.L.A. School of Law who researches L.G.B.T.Q. health disparities, and can discourage bisexual people from accessing the community’s resources and support.

Jessie Miller, 27, a graduate student in sociology at the University of Illinois at Chicago who uses she/her or he/him pronouns, came out as bisexual at 14 in a speech at a schoolwide assembly. She said she was never ashamed of her sexuality until her 20s, when both gay and straight friends and family started telling her they didn’t believe she was really attracted to women, and that she was going through a phase.

“It was other people who instilled in me that there was something wrong with me, that I didn’t know who I was,” she said.

Ms. Miller said she has struggled to find a therapist who understands the conflicting emotions around bisexuality and internalized biphobia. “It’s impossible to find the right support,” she said.

If you are bisexual — and especially if you are bisexual and in a relationship with someone of the opposite gender — your sexual identity may not be obvious to the outside world, Dr. Mereish said. This can lead to the exhausting decision of what to do if someone, including a therapist, automatically assumes you are straight. Should you correct them? Or should you stay quiet and risk feeling like you are erasing your own identity? “There’s this stress of having to decide, is this interaction worth me coming out?” Dr. Mereish said. It can be “a psychologically taxing process.”

According to Dr. Fish, bisexual people are less likely than gay and lesbian people to disclose their sexuality to people in their lives. But that stress of concealing your identity by not coming out can generate and fuel anxiety, she said.

There are glimpses of hope.

Christopher McKenzie, 46, a film professor at Boston University who identifies as bisexual, said he pays close attention to the ways in which bisexual people are portrayed onscreen — or not. Those portrayals often perpetuate stereotypes that bisexuals are “deviant” or untrustworthy, he said, and can influence how bisexual people see themselves, and how other people treat them.

Mr. McKenzie said it’s been difficult to disclose his sexuality while dating because of the stigma he faces. “The most challenging thing hasn’t been with my straight friends, it’s been with gay men I’ve dated,” he said. “They look at me like I’m an alien,” Mr. McKenzie said, referring to the moment after he’s told a gay partner that he’s bisexual. When this happens, he said he sometimes feels like an outsider or someone who can’t be “taken seriously as a romantic partner.”

A number of advocacy groups offer resources and support. The Bisexual Resource Center, a nonprofit that connects bisexual organizations and people worldwide, maintains a list of online and in-person support groups for bisexual people. It also hosts the Bisexual Health Awareness Month online campaign every March to disseminate information about health discrepancies in the bisexual community. The Trevor Project also offers crisis hotlines and text lines.

While less than one percent of the grant funding for L.G.B.T.Q. organizations goes to bisexual-specific groups, said Jessica Haggett Silverman, president of the Bisexual Resource Center, there’s hope that these causes will gain traction as more young people identify as bisexual.

Despite the stigma he’s experienced, Mr. McKenzie also feels optimistic about the future. He hopes there will be fairer media representation of bisexual people going forward, which in turn might spur the queer community, and heterosexual people, to become more inclusive and accepting. He’s looking forward to a time when he doesn’t feel the need to keep explaining who he is.

“It’s all or nothing for a lot of people,” he said, “and that’s just not how love works.”