The Grenfell Fire, 5 Years Later: What Happened, and What Has Changed 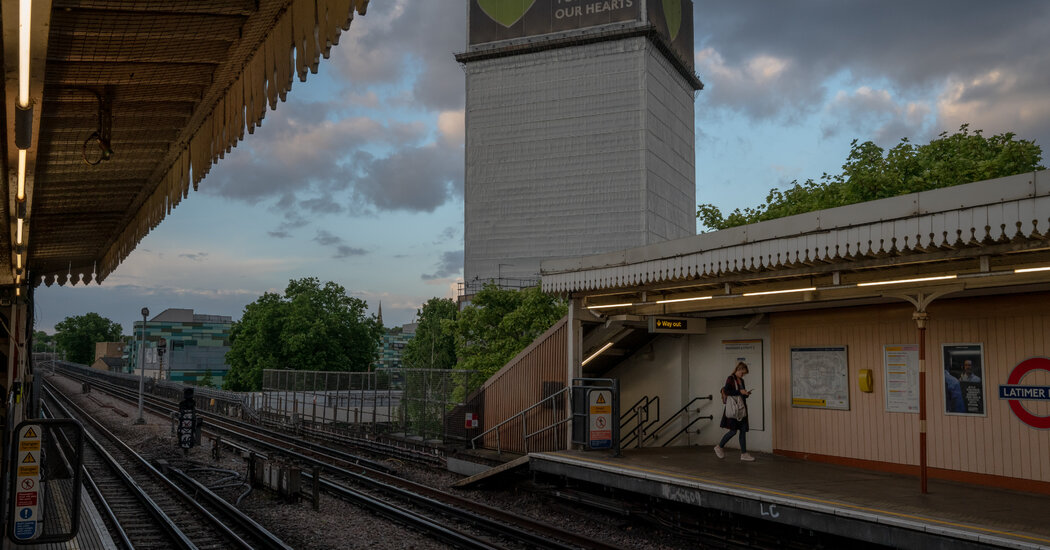 LONDON — Five years ago, a fire in a tower block in West London killed 72 people, shattered a community, unsettled a country and exposed harsh inequalities in one of London’s richest neighborhoods. It also set off a broad reckoning into British fire regulations and building safety.

Shortly before 1 a.m. on June 14, 2017, a resident on the fourth floor woke up his neighbor to tell him that his fridge had blown up. The fire in the kitchen quickly spread to flammable cladding covering the outside of the 24-story building and climbed up the side of the structure.

At 12:54 a.m., the London Fire Brigade got the first call. Firefighters reached the scene a few minutes later and entered the building.

Flames were moving quickly along the building’s combustible covering, wrapping the tower in flames. For about two hours after the fire was reported, firefighters advised residents to stay in their apartments. Some still went out through the stairs and more than 200 people survived, of approximately 300 people who were in the building at the time.

The fire was not brought under control until more than 24 hours after it had begun.

The underlying causes of the fire were the flammable exterior materials, which sped up the spread of the deadly blaze.

Grenfell Tower was built in the 1970s, and its concrete structure, originally built without cladding, was designed to contain a fire in one apartment for long enough to allow firefighters to intervene. The year before the fire, Grenfell Tower underwent a renovation and its facade was covered with panels.

Residents have said that the facade was installed to make their housing project more aesthetically pleasing since it stands close to high-end areas in the London borough of Kensington and Chelsea.

The panels were made of sheets of an aluminum composite with one layer of polyethylene sandwiched between them. During the fire, the polyethylene, a type of plastic, melted and caught fire, with flaming drops falling down the sides of the building. The insulation between the panels and the concrete structure was also flammable, and the air gap between them whisked heat and flames upward.

The cladding, which has been used in several other buildings across England, is not allowed on high-rise buildings in many countries, including the United States, because of fire danger. But decades of deregulation in England led to lax building rules that allowed some developers to prioritize cutting costs over safety.

Residents had complained for years that the building was unsafe, lacking sprinklers, fire alarms and fire escapes. It also had only one staircase.

The routine advice by the firefighters to stay inside, based on the assumption that fires can be compartmentalized, also did not take into account the fact that the cladding would lead to the fire’s quickly engulfing the entire building. And, according to a report from a government-commissioned investigation, the London Fire Brigade “failed to revoke the ‘stay put’ advice at a time when the stairs remained passable.”

The government-commissioned investigation was divided into two phases. The result of the first inquiry, focusing on what happened the night of the fire, was issued in 2019. The nearly 900-page report harshly criticized the London Fire Brigade, especially for failing to urge residents to leave. The report acknowledged but did not focus on the materials used for the building’s covering.

The second phase of the public inquiry, which is expected to address how and why the cladding was adopted in the renovation, is continuing and is expected to end later this year. Lawsuits have been filed against local authorities and manufacturers, including Arconic, the American company that manufactured the cladding, and Celotex, a British company that made the insulation.

London’s Metropolitan Police Service is also conducting a criminal investigation into offenses that include corporate manslaughter, gross negligence manslaughter, fraud, and health and safety offenses. The police said the publication of any final public inquiry report will follow the Phase 2 report.

After that, if police officials conclude there is sufficient evidence to consider criminal charges, they will submit a file to the Crown Prosecution Service, which is responsible for prosecuting criminal cases investigated by the police and other investigative authorities in England and Wales.

On Monday, Stuart Cundy, deputy assistant commissioner of London’s Metropolitan Police, said in a statement that the agency has more than 180 investigators dedicated to the Grenfell fire investigation and that they are working with international experts. In a statement, he said they spent a year doing forensic examinations of the tower, that they have taken more than 9,000 witness statements and worked through over 130 million documents from companies and organizations linked to the tower.

For bereaved families, the delay in accountability is a protracted pain.

“For us that is one of the many open wounds,” said Giannino Gottardi, whose son Marco Gottardi died in the fire.

The fire at Grenfell Tower has called attention to widespread fire safety problems in buildings across England, with thousands of apartments at risk in what has been called a “cladding scandal.”

After the fire, in 2017, nearly 4,000 residents were evacuated from dangerous high-rise buildings in London, and the government ordered an investigation into cladding and insulation on high-rise towers.

The British government has since banned Grenfell-style cladding on tall buildings, which has been removed from many of the hundreds of other high-rises where it was identified. This month, the government announced a complete ban on the use of that cladding on all new buildings and buildings undergoing repairs, regardless of height or use.

The British government has also allocated billions of dollars to fund the removal of unsafe cladding in England, but critics said the funds were largely insufficient and many people who owned apartments in unsafe buildings found themselves having to endure burdensome costs to fix them and struggled to hold developers accountable.

In January, the British government announced plans to overhaul the government’s approach to building safety across England, and has made moves to ensure that the costs of fixing fire safety issues are shouldered by the developers.

One of the older of the Grenfell Tower victims was in her 80s, the youngest only a few months old.

Among the others who died in the fire were two young Italian architects who had moved to London to pursue their careers. Another resident, Rania Ibrahim, recorded a video and posted it online as she tired to escape the fire. “It’s over. It is here,” she said. “Pray for us.” Her two daughters, ages 3 and 5, also died. Others were a great-grandfather, a 6-year-old who dreamed of becoming a fireman and a 24-year-old artist of Gambian heritage whose work was featured in the memorial space of the Tate Britain art gallery.