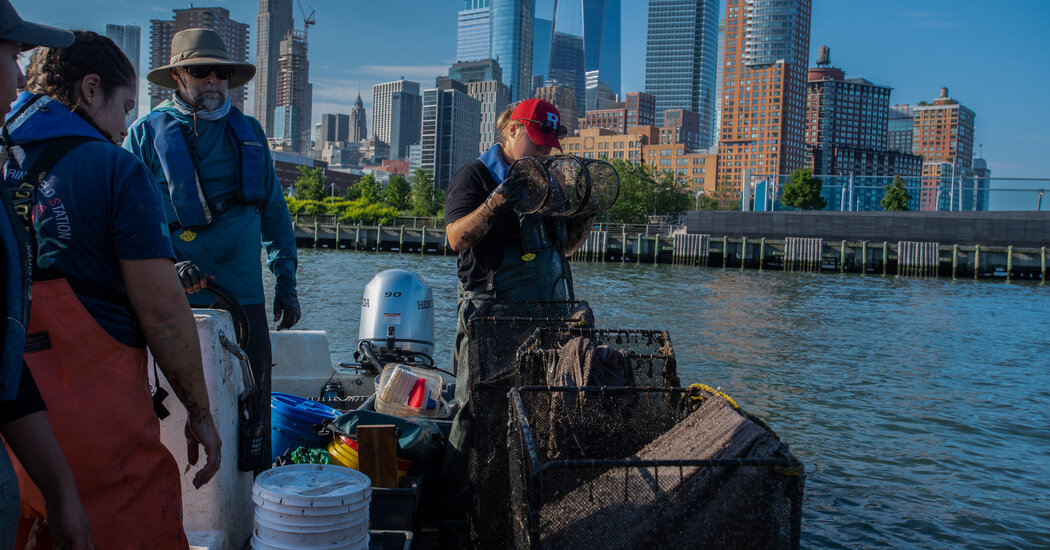 Good morning. It’s Thursday. Strap on a life jacket as we ride out into the Hudson River with marine biologists who are checking on oysters in the Hudson’s continuing comeback. We’ll also see what’s next in the New York attorney general’s case against Donald Trump in the wake of Trump’s decision to cite the Fifth Amendment’s protection against self-incrimination.

The oysters were small, barely the size of a thumbtack.

The people measuring them, on a skiff rocking in the Hudson River between Pier 26 and Pier 34, were thrilled.

“Great growth,” reported Carrie Roble, vice president of the River Project, a unit of the Hudson River Park Trust that lowered more than 200 “oyster habitat enhancements” to the muddy bottom last year. The “enhancements” were basketlike structures called gabions and oyster reef balls that had created artificial reefs. They had been carefully seeded with oyster spat — juvenile oysters.

Now it was time to see how the youngsters were coming along.

That meant it was time to lift minnow traps also lying in the gooey mud at the bottom of the river — the “black mayonnaise,” Thomas Grothues, a research associate professor at the Rutgers University School of Environmental and Biological Sciences, called it.

He was steering the skiff. Rutgers is helping the River Project monitor fish that also benefit from the new habitat. Whatever was caught in the traps was quickly released, but not before Miranda Rosen and Kiernan Bates of the Rutgers Marine Field Station took measurements as the skiff idled near a buoy.

The sun glinted off the new buildings beyond the piers of Lower Manhattan as Grothues talked about the Hudson in the old days — the forests and salt marsh that used to line the shore — and the fish that are slowly making a comeback. “There are lots of people in New York who don’t know there are fish in the water here,” he said. “I am continually surprised that when I tell them I’m studying fish, they say, ‘There’s fish there?’ All these people are living here who are completely disconnected from the river.”

How different New York used to be. It was one of the world’s oyster capitals before it was a capital of much else. Henry Hudson said the natives “brought great store of very good oysters aboard” his little ship. The oyster was so closely identified with the city that, as the author Mark Kurlansky noted in his book, “The Big Oyster,” New York had a different nickname before it became known as the Big Apple.

But pollution in the 20th century decimated the oyster beds. That meant that one step in the restoration of the harbor was the restoration of oysters. The seeded oysters in the River Project’s gabions and reef balls came from the Billion Oyster Project, a nonprofit that wants the oyster population to be in the 10 figures by 2035.

By the time Grothues pointed the skiff back to Pier 26, the inventory listed black sea bass, blue crabs, small-mouthed flounder and oyster toadfish — “very vocal,” Grothues said. “If you swim underwater, you hear them. They’re like a foghorn.”

Numerous inquiries. Since Donald J. Trump left office, the former president has been facing several different civil and criminal investigations across the country into his business dealings and political activities. Here is a look at some notable cases:

Jan. 6 investigations. In a series of public hearings, the House select committee investigating the Jan. 6 attack laid out a powerful account of Mr. Trump’s efforts to overturn the 2020 election. This evidence could allow federal prosecutors, who are conducting a parallel criminal investigation, to indict Mr. Trump.

Georgia election interference case. Mr. Trump himself is under scrutiny in Georgia, where the district attorney of Fulton County has been investigating whether he and others criminally interfered with the 2020 election in the state. This case could pose the most immediate legal peril for the former president and his associates.

This was before an oyster toadfish nipped Grothues’s thumb. “Tiny teeth and powerful jaws,” Roble said.

But her focus remained on the tiny oysters, a hopeful sign amid concern about how climate change is bringing on higher sea levels and increasingly frequent and severe storms.

“The oysters, they are thriving so far,” Roble said. “We’re pleased they’re growing. Now we’re looking to see if they reproduce.”

Storms passing close by will bring scattered showers this morning, then isolated showers until midafternoon. The stormy sky will gradually give way to sun, with a high near 88. Drier air will settle in for a mild evening with a low in the 70s.

In effect until Monday (Feast of the Assumption).

But on Wednesday, Trump took the Fifth himself. He sat across from the New York State attorney general, Letitia James, as he said “same answer” over and over. Trump’s office had released a statement shortly after the questioning began that said he was exercising “the rights and privileges afforded to every citizen under the United States Constitution.”

My colleagues William K. Rashbaum, Jonah E. Bromwich and Benjamin Protess write that James has two options. She could file a lawsuit against Trump, or she could seek a settlement that would probably involve a significant financial penalty.

Either way, his decision to invoke the Fifth Amendment could work to her advantage.

Trump’s decision not to answer questions could be held against him at trial if she files suit. Judges in civil cases sometimes tell jurors that they may consider a defendant’s decision to invoke the Fifth Amendment in their deliberations. They may infer, for instance, that the defendant is hiding something, a legal concept known as a “negative or adverse inference.”

Jurors in criminal cases are instructed not to hold taking the Fifth against a defendant. But James can file only a civil case. Had he answered questions from James and her legal team, Trump could have unwittingly aided the parallel criminal investigation into similar conduct being conducted by the Manhattan district attorney’s office.

The district attorney, Alvin Bragg, had said he would monitor the James interview closely. His office’s criminal investigation — begun under his predecessor, Cyrus Vance Jr. — covers much of the same issues as James’s civil inquiry. But Bragg, who took office in January, had concerns about proving that Trump intended to break the law, a requirement for the charge that prosecutors had been considering, as The New York Times reported in March after the grand jury presentation had been suspended.

Bragg has said that his investigation is continuing, though he has not given a clear sense of the direction it might be taking.

The statement from Trump’s office linked his refusal to answer questions from James to the F.B.I.’s search of his home in Florida, painting James’s inquiry and the search as part of a larger conspiracy. (The two investigations are not linked.)

“I once asked, ‘If you’re innocent, why are you taking the Fifth Amendment?’” Trump said in the statement. “Now I know the answer to that question.” He said that he was being targeted by lawyers, prosecutors and the news media, and that left him with “no choice.”

I’m a bus operator for New York City, lately driving the M72. Sometimes I use the hazard lights when pulling into stops.

One day, an older woman, perhaps in her 70s, got on at 67th and Fifth, just before the bus turns west to go through the transverse.

“I like how you blink the lights,” she said. “My late husband used to make them blink when driving away to say goodbye.”

Her fare was not required that day.