To Find ‘Freedom,’ They Ditched the Road for the Gravel 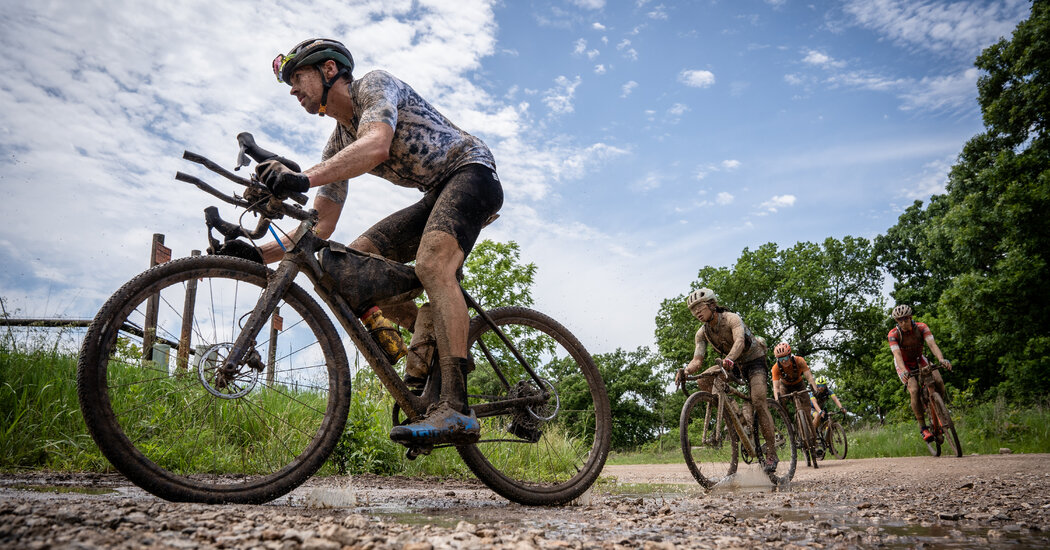 Abi Robins was elated by the email. It was March 2021, and Robins had been training for nearly a year to ride in Unbound, one of the largest and best-known gravel riding competitions in the country. In the email, Unbound’s organizers announced that they were creating a nonbinary category for the first time. The organizers wanted all riders to feel welcome — so long as they were willing to endure 25 miles or more of grueling, muddy and rocky bike riding.

“I’ve been out as nonbinary for four to five years now. When you live your life outside of traditional categories, you sometimes feel like no one can see you,” Robins said, continuing, “But then I get this email, and I get the chance to compete in a category that actually aligns with who I am. I was so outrageously and pleasantly surprised.”

Inclusivity is one of the keys to understanding the steep rise of gravel riding as a major cycling category. A midpoint between road and mountain biking, gravel riding has been around for as long as there have been bicycles. But it has become especially popular in the United States, where there are almost 1.5 million miles of unpaved roads.

During the pandemic, riders have increasingly spun onto these roads, in part to get outdoors and in part to avoid sharing lanes with cars. Any bike can be used for gravel riding, but gravel bikes have gear, tire and suspension systems especially designed for rough rides. According to the NPD Group, a consumer data firm, revenue from sales of cross and gravel bikes increased 109 percent from 2019 to 2021.

Gravel riding has also emerged as a mainstream competitive cycling category, and some riders hope it can be part of a resurgence in the sport’s popularity, which peaked during Lance Armstrong’s run of dominance but has never fully recovered from his scandalous downfall.

Just 34 riders participated in the first year of Dirty Kanza, the race that would become Unbound, in 2006. By 2018, Unbound had been acquired by fitness giant Life Time and moved to a lottery system for entrants because of the overwhelming demand for slots. On Saturday in Emporia, Kan., nearly 3,000 riders from around the world competed in the races, which range from 25 to 350 miles. And new competitions are emerging every year.

“The emergence of gravel makes a lot of sense,” said Kimo Seymour, Life Time’s president of events and media. “There are lots of gravel spaces around. There are small towns that want these festivals. Gravel riding is popping up everywhere because you often don’t need permits or police. You just pick a course, create a GPS file and maybe have a beer and a T-shirt at the end.”

Although early races were composed primarily of amateur riders, more accomplished cyclists have recently moved from the mountains or the roads to gravel. Ian Boswell spent most of the 2010s as a professional road racer, qualifying for the Tour de France in 2018. After retiring in part because of a crash and a concussion, he moved to a house on an unpaved road in Vermont. Gravel riding helped him reclaim the joy of cycling that he had lost during his decade as a pro rider.

“Road racing has traditionally been so exclusive,” said Boswell, who finished third in this year’s race. “You have to have a license and be in a category. Gravel welcomes anyone. You can try for a decade to get on the start line for the Tour de France and never come close. You can win the Unbound lottery and be on the start line with the best gravel racers in the world next year. That’s the beautiful thing about gravel riding. It’s a blank canvas. It’s something completely different. There’s so much freedom.”

Boswell won the Unbound 200 last year, beating a fellow former World Tour professional Laurens ten Dam by less than a second. “I thought I’d retired,” Boswell said. “I said to myself, ‘I’ll do this gravel thing for fun, but I’m not a pro athlete anymore.’ Now I’m finding myself more in the spotlight than I ever did on the Tour in Europe.”

Lauren De Crescenzo — a former member of the U.S. Road World Championships team and medalist at the 2018 USA Cycling Collegiate National Championship Road Race — finished first among women last year and second this year. She transitioned to gravel riding while she was working for the Centers for Disease Control and Prevention in Atlanta, a position she started six months before the onset of the pandemic.

“It was definitely a coping strategy,” she said. “I was on the White House Task Force. It was very stressful. I looked back at my data recently and realized I’d never ridden more at any point in my life. I had nothing else going on in my life besides work. I needed to escape to the dirt and gravel.”

De Crescenzo is among the many gravel riders who are reeling this month after learning of the shooting death of Anna Moriah Wilson. Wilson, who finished ninth in the Unbound 200 a year ago, was killed in Austin, where she had been visiting for a bike race. In Wilson’s honor, Unbound hosted a 12-mile memorial sunrise ride the day before the official race.

“Moriah was a fierce competitor and a kind soul,” De Crescenzo said. “This tragedy has made us all reflect on the way that gravel is this giant, weird family. The loss of one of us is a loss for all of us.”

For many riders, being on the bike is a form of relief that they refer to as “gravel therapy.” Riding isn’t just about physical health, but mental health also — it’s about breaking routines, finding new paths and pushing past psychological limits

Paulina Batiz, a single mother from Emporia, first started riding to support a colleague with cancer. She found that the rides were a way for her to work through some of the traumas she had faced in her life, from losing her father as a teenager to raising her daughters and caring for her younger brother by herself. This year, she became the first Emporia woman to complete the 200-mile race five times.

“It’s a release for me,” she said. “It’s a chance to work out the day’s issues or the problems I’m facing in my life. All my frustrations and anxiety get crushed up in that gravel.”

Most riders don’t go into events like Unbound hoping to win. They know that conditions on the course are unpredictable — at Unbound, temperatures sometimes tip past 100 degrees, and there is often rain or even hail — and they’re just hoping to finish. And to enjoy the company of a community of like-minded adventurers in the process.

Last year, Robins crossed the finish line of the 100-mile competition after 11 hours, 9 minutes and 3 seconds. They were the only nonbinary racer, but Unbound’s organizers still held a special podium ceremony for them. This year, Robins attempted the 200-mile race but wasn’t able to finish because of mechanical issues and injuries. However, they were overwhelmed with pride when they saw full podiums for the 100- and 200-mile races in the nonbinary categories.