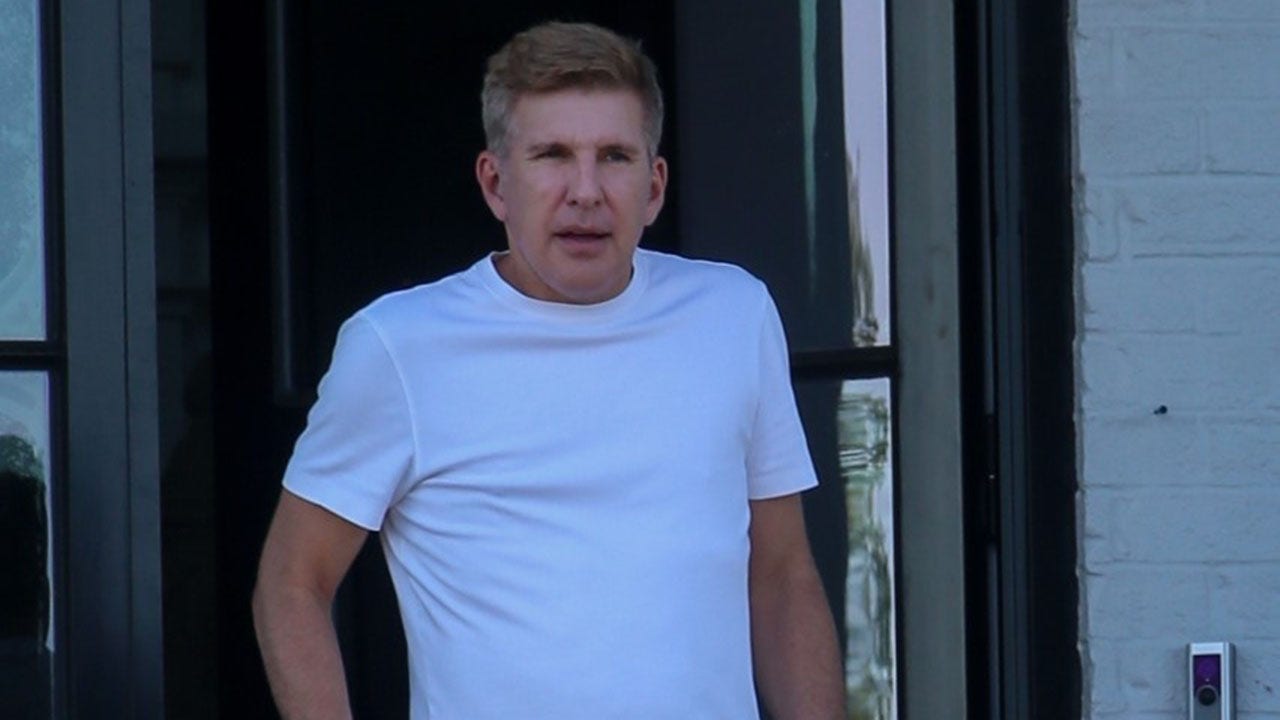 Todd Chrisley was seen for the first time since the reality star and his wife Julie Chrisley were found guilty on all charges of bank fraud and tax evasion in an Atlanta, Georgia, courtroom on Tuesday.

The “Chrisley Knows Best” star was seen greeting his daughter, who had stopped by her parent’s home to drop off a package. Todd, 53, sported a casual look, pairing tan pants, a white T-shirt and socks.

The couple was initially indicted in August 2019, and a new indictment was filed in February in which the couple faced 12 counts of bank and wire fraud, tax evasion and conspiracy over a nine-year period, all of which they denied.

Todd Chrisley was seen for the first time since being found guilty of all charges of back fraud and tax evasion.
(Backgrid)

The Chrisleys shared that they were “devastated and disappointed” following the jury’s verdict.

“The Chrisleys are devastated and disappointed with the verdict; however, they will be actively pursuing an appeal,” Julie’s lawyer, Steve Friedberg, told Fox News Digital on Wednesday. “They are grateful for all of the love and support they have received from their family, friends and fans.

“They remain strong in their faith and are deeply concerned for the welfare of their children, as well as Todd’s mother, Elizabeth Faye Chrisley. They are determined to continue the ‘fight’ until justice prevails, and they are exonerated.”

Todd Chrisley was seen talking on the phone and greeting his daughter after a jury found him and his wife, Julie Chrisley, guilty of all charges.
(Backgrid)

The couple has three children together: Grayson, 16; Savannah, 24; and Chase, 26. Todd also has a son from his first marriage, Kyle, 30, and daughter Lindsie, 32, whom Julie legally adopted years ago at a young age.

Peter Tarantino, an accountant hired by the Chrisleys, is charged with one count of conspiracy to defraud the United States and two counts of willfully filing false tax returns. He was also found guilty.

After they were found guilty, U.S. District Judge Eleanor Ross allowed the Chrisleys to remain free on bond. But she placed them on location monitoring and home detention, meaning they can only leave the house for certain reasons, including work, medical appointments and court appearances. They also have to alert their probation officers to any spending over $1,000, according to the order entered Tuesday.

The trial began three weeks ago, and jury deliberations started on Friday, with a verdict delivered on Tuesday.

The Chrisleys could each face up to 30 years in prison, and a sentencing hearing will take place on another date.