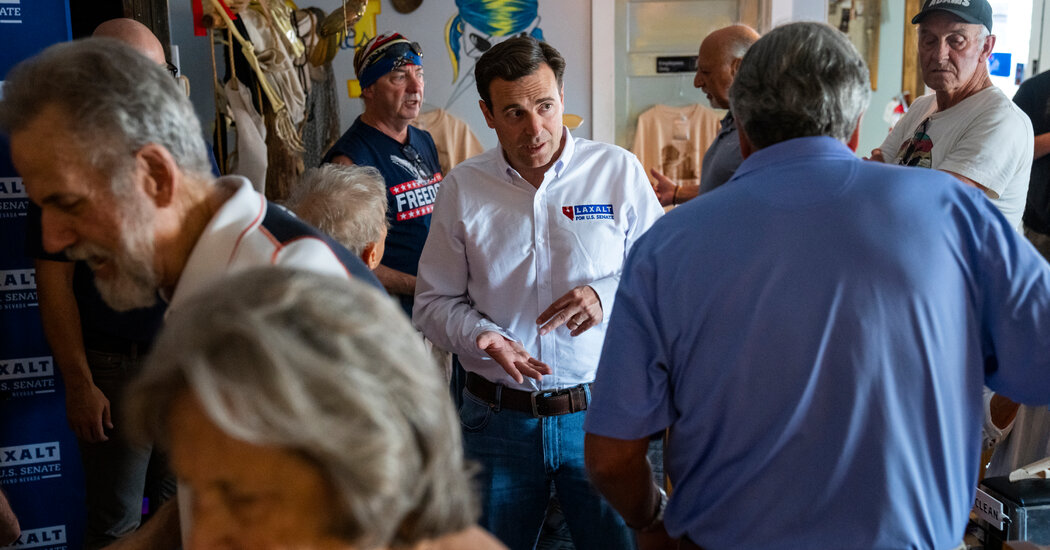 Republican voters in Nevada on Tuesday elevated conservative candidates who have ardently embraced Donald J. Trump’s false claims of election fraud, turning a key swing state into a contest this fall between embattled Democrats and Republicans who insist President Biden stole the 2020 election.

The victories in the Nevada primaries for Mr. Trump capped a series of elections on Tuesday that saw one South Carolina Republican lawmaker who had crossed Mr. Trump go down in defeat, another survive her Trump-backed challenge and a Hispanic Republican grab a South Texas House seat vacated by a Democrat.

Those results gave mixed signals about Mr. Trump’s continuing grip on the party even as the scrutiny of his actions following his 2020 defeat intensifies. At the same time, the elections on Tuesday suggested that Republicans remain on course for strong gains in November’s midterms.

Among the Republicans who won their primaries Tuesday were Adam Laxalt, a Senate candidate and former Nevada attorney general who led Mr. Trump’s efforts to overturn the state’s 2020 election results, and Jim Marchant, a secretary of state candidate who has pressed conspiracy theories about voting machines and hopes to oversee the state’s 2024 election.

Both Mr. Rice and Ms. Mace had crossed the former president as he struggled to maintain power after the Jan. 6 attack, which is now under the spotlight of congressional hearings. Mr. Rice, a staunch conservative in a conservative coastal district, was one of 10 House Republicans who voted to impeach him for inciting the riot. Ms. Mace, in her first speech as a newly elected freshman, said Mr. Trump bore responsibility for the deadly mayhem, though she did not vote to impeach him.

The South Carolina contests had their own dynamics — Mr. Rice was defiant and contemptuous of Mr. Trump to the end, while Ms. Mace tried hard to regain the good graces of Trump administration officials if not Mr. Trump himself. The outcomes of both races could hold deep meaning to the party as it considers whether to renominate the former president for another White House run.

“This took a little bit of time, but we are finally here,” Ms. Mace told those gathered for a victory party in Charleston, as she thanked Ms. Arrington for “stepping into the arena.” She added, “this is going to make our campaign even stronger in November.”

The elections on Tuesday represented something of a midpoint in a Republican primary season that has delivered decidedly mixed signals to party leadership. Mr. Trump has claimed some significant wins, propelling his chosen Senate candidates to primary victories, such as J.D. Vance in Ohio and Mehmet Oz in Pennsylvania. However, his endorsed candidates have lost primary showdowns for governor in Georgia and Nebraska as well as a key secretary of state race in Georgia.

Still to come are contests that rank high on his vengeance list, such as Representative Liz Cheney’s primary in Wyoming on Aug. 16. Ahead of Arizona’s Aug. 2 primary, Mr. Trump has backed Kari Lake, a promoter of his false stolen-election claims, to be the state’s next governor. To take on Senator Mark Kelly of Arizona, he picked Blake Masters, who was caught on tape promoting the conspiracy that one-third of the people outside the Capitol on Jan. 6 were F.B.I. agents.

In South Carolina, Mr. Rice was only the second of the 10 impeachment Republicans to take his case for re-election to the party’s primary voters, and he was the first to lose. The other, Representative David Valadao of California, clings to a slim lead over a Trump-aligned challenger, as vote counting continues after the primary there last week. Mr. Rice’s defeat means half of the 10 will not be returning to Congress next year, with other contests still to come, including Ms. Cheney’s uphill climb.

Ms. Mace’s run for re-election had split the Trump community. The Trump administration’s most prominent South Carolinians — former Representative Mick Mulvaney, his budget director and acting chief of staff, and former Gov. Nikki Haley, who served as United Nations ambassador — both backed Ms. Mace against Ms. Arrington, who was a proven gamble for the party since she had lost the seat to a Democrat in 2018.

Ms. Haley, who is considering her own run for president in 2024, had scrambled to endorse Ms. Mace before Mr. Trump could endorse Ms. Arrington, a move that established some independence without openly crossing the former president.

In the Republican upset in South Texas, Ms. Flores won a special election to fill the remainder of Mr. Vela’s term until the end of the year, becoming one of three Latinas to ever represent the state in Congress. The seat will once again be up for grabs in the November general election. Yet even her temporary victory foreshadows broader Republican gains in the Democratic stronghold of South Texas.

Ms. Flores — who was born in Tamaulipas, Mexico, and is the wife of a Border Patrol agent — raised 16 times the amount logged by her closest Democratic competitor, Dan Sanchez. She appeared to have at least one celebrity supporter — Elon Musk, who posted on Twitter early Wednesday that he voted for Ms. Flores, describing it as the “first time I ever voted Republican.” Mr. Musk’s SpaceX operates a launch site in the district.

Why are these midterms so important? This year’s races could tip the balance of power in Congress to Republicans, hobbling President Biden’s agenda for the second half of his term. They will also test former President Donald J. Trump’s role as a G.O.P. kingmaker. Here’s what to know:

What are the midterm elections? Midterms take place two years after a presidential election, at the midpoint of a presidential term — hence the name. This year, a lot of seats are up for grabs, including all 435 House seats, 35 of the 100 Senate seats and 36 of 50 governorships.

What do the midterms mean for Biden? With slim majorities in Congress, Democrats have struggled to pass Mr. Biden’s agenda. Republican control of the House or Senate would make the president’s legislative goals a near-impossibility.

What are the races to watch? Only a handful of seats will determine if Democrats maintain control of the House over Republicans, and a single state could shift power in the 50-50 Senate. Here are 10 races to watch in the House and Senate, as well as several key governor’s contests.

When are the key races taking place? The primary gauntlet is already underway. Closely watched races in Pennsylvania, North Carolina and Georgia were held in May, with more taking place through the summer. Primaries run until September before the general election on Nov. 8.

Go deeper. What is redistricting and how does it affect the midterm elections? How does polling work? How do you register to vote? We’ve got more answers to your pressing midterm questions here.

Ms. Flores had not received a formal endorsement from Mr. Trump, but she had campaigned as a Trump-inspired Republican focused on border security. Her campaign signs highlighted three words: “Dios, familia, patria.” God, family, country.

In one of her earliest campaign ads, she made her way through a thick field of flowering cotton in South Texas, as she blasted a Democratic Party that she said insists on selling Hispanics the idea that they should depend on big government.

“At 13 years old, I was working in this very cotton field every day, all day, in the hot Texas sun,” she said, adding that immigrants like her came “the legal way” to pursue the American Dream. She called for a militarization of the border, embraced Mr. Trump’s false claims of election fraud and often denounced the “radical socialist communist agenda.”

In Nevada, Republican candidates largely sought to align themselves with Mr. Trump, taking hard right stances on abortion, guns, immigration and the teaching of race and gender in schools.

In the governor’s race there, Clark County Sheriff Joe Lombardo won the Republican nomination and will face Mr. Sisolak in November. The sheriff had been criticizing the governor for his mask mandates and his handling of the coronavirus pandemic. Mr. Sisolak abandoned the state’s mask mandate in February and has been heavily promoting Nevada’s economic rebound and the billions of dollars pumped into the state from federal coronavirus relief packages.

In the Senate race, Ms. Cortez Masto will face Mr. Laxalt, the grandson of a former Nevada governor and senator. In an audio recording obtained by The New York Times, Mr. Laxalt told voters in March that he was already gearing up to fight election fraud in his race, explaining that “we’re vetting which group we think is going to do better.”

But it was Mr. Marchant, a former state assemblyman, who worries many Democrats the most. At events with the MyPillow chief executive Mike Lindell and other Trump allies, Mr. Marchant has embraced some of the most far-fetched and debunked electoral conspiracy theories. He has pressed for all ballots to be cast and counted by hand, and he organized the “America First” secretary of state coalition to elect candidates who have embraced false claims about the 2020 election.

As it has been in the past several elections, Nevada promises to be a battleground in the 2024 presidential campaign, and the person running the election will either be Mr. Marchant or Cisco Aguilar, a Democrat and former aide to the late Senate majority leader Harry Reid.

“Enough of the untruths. We need to focus on the truths in a bipartisan way,” Mr. Aguilar told The Las Vegas Review-Journal.

Beyond those statewide offices, three Nevada House seats are deemed tossups for the fall, a potential windfall for Republicans as they seek control of Congress.

In Nevada, where Mr. Reid and the state’s Culinary Union built an influential Democratic political machine, a racially diverse coalition of working-class and Latino voters has powered crucial Democratic victories in presidential elections since 2008. But the president’s party tends to lose ground in midterm elections. That has been particularly true for Democrats in Nevada. Democratic turnout in the midterms in the state has tended to take a sharp nosedive, favoring Republicans.