Video: Josh Hawley Cheered on Jan. 6. Then He Fled. 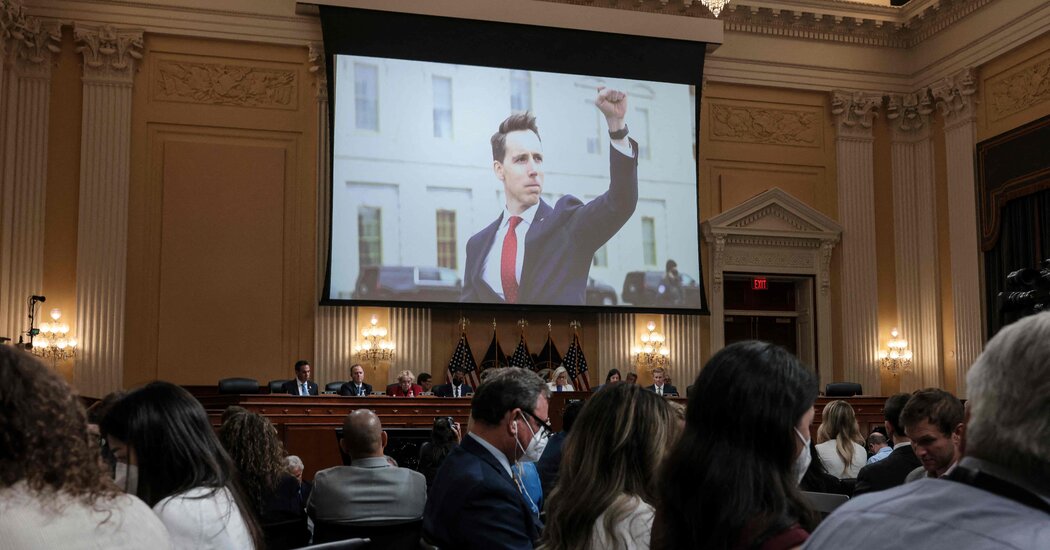 The image of Senator Josh Hawley, Republican of Missouri, raising his fist in solidarity with a crowd of Trump supporters outside the Capitol on Jan. 6 became an iconic symbol of how he and members of his party had made common cause with members of the mob that ultimately stormed the building.

On Thursday night, the congressional committee investigating the attack offered the public another indelible image of Mr. Hawley — this time, of the senator legging it out of the Capitol as it was invaded by the same people he had cheered on hours before.

A never-before-seen pair of surveillance videos released by the panel — which drew hearty laughter from spectators inside the hearing room — instantly tore across the internet, with users overlaying various soundtracks, such as the theme songs to the movie “Chariots of Fire” and “The Benny Hill Show,” and Kate Bush’s “Running Up That Hill.”

There were a fair share of “How it started … how it’s going” jokes at the expense of Mr. Hawley, who led the effort to object to electoral votes for Joseph R. Biden Jr. on Jan. 6, 2021, and is regarded as a potential Republican presidential contender.

The Twitter account of Representative Carolyn B. Maloney, Democrat of New York, posted the image of Mr. Hawley raising his fist outside the Capitol, which the Missouri Republican has since used for fund-raising, alongside the image of him fleeing the Capitol.

Humor aside, the memes touched on a central focus of the committee’s: how the lies of a stolen election spouted by former President Donald J. Trump and spread by his allies in Congress fed the violence that erupted at the Capitol on Jan. 6.

Representative Elaine Luria, Democrat of Virginia, who helped lead the hearing on Thursday night, said the panel had interviewed a Capitol Police officer who was outside the building as Mr. Hawley raised his fist.

“She told us that Senator Hawley’s gesture riled up the crowd,” Ms. Luria said. “And it bothered her greatly because he was doing it in a safe space, protected by the officers and the barriers.”

In the days after the attack on the Capitol, Mr. Hawley remained defiant, arguing that the electoral count in Congress was the proper venue to air his concerns about fraud in the balloting.

“I will never apologize for giving voice to the millions of Missourians and Americans who have concerns about the integrity of our elections,” Mr. Hawley said then. “That’s my job, and I will keep doing it.”