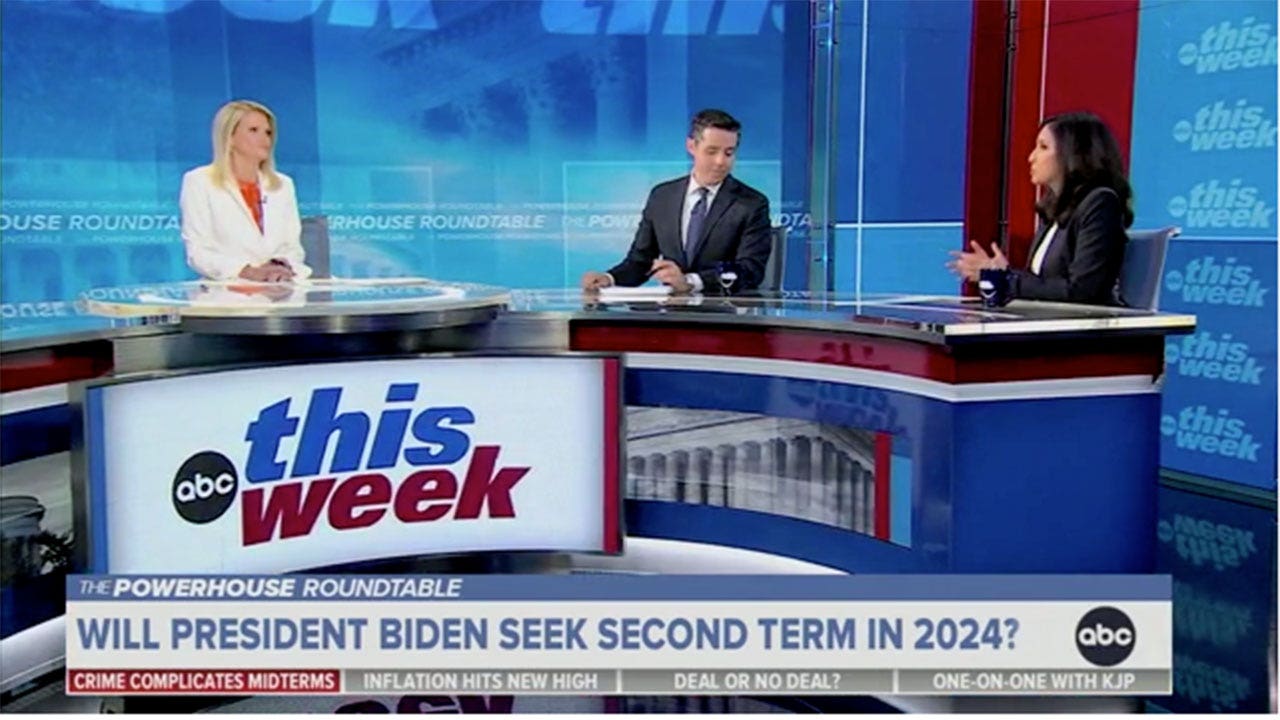 Washington Post congressional reporter Marianna Sotomayor said Sunday during ABC’s “This Week” that it could be too late for Democrats on the economy as the midterms approach.

“That’s not a good headline,” Raddatz said of the piece, headlined, “Should Biden Run in 2024? Democratic Whispers of ‘No’ Start to Rise.”

A New York Times reporter said in May that a lot of Democrats don’t believe Biden will run again in 2024.

BIDEN FRUSTRATED WITH AIDES FOR WALKING BACK STATEMENTS, WORRIES HE LOOKS WEAK: REPORT

ABC News political director Rick Klein said that the White House wasn’t “too concerned” about it because the “whispers” weren’t “shouts” and that “people aren’t saying it very loudly.”

He noted that there was no obvious person who could step in and that not many Democrats believed Vice President Kamala Harris would be the right fit. He also said some Democrats believe that Biden did beat former President Donald Trump in 2020 and that he could do it again.

BIDEN GOES MORE THAN 100 DAYS WITHOUT MAINSTREAM MEDIA INTERVIEW: ‘HIS HANDLERS ARE PETRIFIED’

A Washington Post reporter said on ABC that it could be too late for Democrats on the economy as they adjust their messaging.
(Photo by Peter Zay/Anadolu Agency via Getty Images)

“They are going to continue to signal that they get it when it comes inflation and gas prices, and they think the president’s standing is closely tied to how people are living their lives and if they can show progress, show that he met the moment, show that he gets it, show that he is addressing it, they think the numbers can get enough better that maybe the midterms aren’t quite as bad as it looks right now and that will change perspectives around 2024,” Klein said.

Sotomayor said that the president changed his tone a little with inflation.

“In the beginning a lot of Democrats were saying, hey look, the economy, it’s doing great, it’s the best in, you know record number of years. And people weren’t feeling that. People were saying why are you telling me its good when all of these prices are going up?” she mused.

The Washington Post’s Marianna Sotomayor said Sunday that it might be too late for the Democrats on the economy.
(Screenshot/ABC/ThisWeek)

“So you are starting to see Democrats shift the messaging a little bit to talk more about and have that empathy but whether that it is a little too late. But it could be a little too late for a lot of these people that are saying we need help now,” she continued.

Inflation, gas prices and the economy remain at the forefront of the 2022 midterm elections as the national average hit $5.01 per gallon of gas on Sunday.

After dipping slightly in April, inflation hit 8.6% in May, reaching a new 40-year-high.

Shelter costs increased 0.6% in May, marking the largest month-over-month increase since 2004.

Hanna Panreck is an associate editor at Fox News.