What Is DACA? And Where Does It Stand Now? 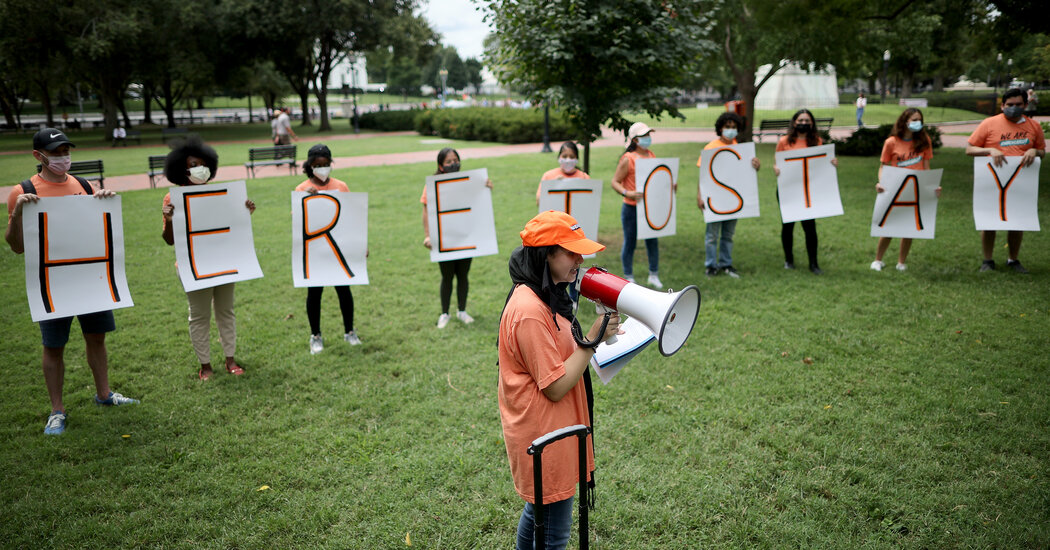 For years, a program known as DACA that protects hundreds of thousands of young immigrants from deportation has been on shaky ground, with court rulings and administration actions canceling, reinstating or partially rolling it back every few months.

The stops and starts have left the immigrants, known as Dreamers, fearful that a single court order or presidential memorandum could upend the lives that they have built since signing up for the program. Though President Biden has repeatedly expressed support for the Dreamers, who were brought to the United States as children, DACA remains mired in legal disputes that render its future, and that of its beneficiaries, uncertain.

In September, a federal judge in Texas ruled the program unlawful, finding that President Barack Obama exceeded his authority when he created DACA in 2012.

But the judge wrote that the federal government should not “take any immigration, deportation or criminal action” against the program recipients that it “would not otherwise take.”

While allowing current beneficiaries to remain in the program, he barred submissions from new applicants.

An appeal by the Biden administration against rescinding the program will be heard by the U.S. Court of Appeals for the Fifth Circuit on July 6, and the case is likely to end up in the Supreme Court.

If the program were to reopen, tens of thousands of young adults would qualify, according to the Migration Policy Institute. But because DACA is now a decade old, its requirement that applicants have lived in the United States since June 15, 2007, prevents hundreds of thousands of undocumented teenagers from meeting the basic threshold to participate.

Here’s what DACA, or the Deferred Action for Childhood Arrivals program, is all about.

The program was created in 2012 through an executive action by Mr. Obama as a stopgap measure to shield from deportation people who were brought into the United States as children and did not have citizenship or legal residency. The protection lasts for two years at a time, and is renewable. The program does not provide a pathway to citizenship.

Participation in the program comes with a range of benefits. Along with authorization to remain in the country, recipients can also get work permits, and can obtain health insurance from employers who offer it.

The ability to work legally has also enabled recipients to pursue higher education, develop careers and obtain driver’s licenses in many states. They can qualify for in-state tuition and state-funded educational grants and loans in some states. Depending on where they live, they may also qualify for state-subsidized health insurance.

Who are the Dreamers?

DACA recipients are often referred to as Dreamers after a piece of legislation called the Dream Act, first introduced in 2001 to give beneficiaries a path to U.S. citizenship. Different versions of that bill have been considered over the years as Congress grappled with a comprehensive overhaul of the country’s immigration system, but they never advanced.

On average, people shielded by DACA are now 26; the oldest are 39. The largest number were brought to the United States from Mexico. Many others were born in Central or South America and the Caribbean. But the fastest-growing group of undocumented students are those from Asia.

To qualify, an applicant had to be enrolled in high school or already have a diploma or G.E.D., or have served in the military, and must have not committed a felony. These charts illustrate their demographics.

Why was DACA begun and how many have applied?

Mr. Obama created it through an executive order in 2012 after more than a decade of failed attempts to pass the Dream Act in Congress, which would put Dreamers on the path to citizenship. Polling repeatedly had shown that Americans across the political spectrum favored allowing young undocumented people who had grown up in the United States to obtain legal status.

U.S. Citizenship and Immigration Services, the agency charged with carrying out DACA, has approved more than 830,000 applications since the program was unveiled 10 years ago.

About 1.2 million unauthorized immigrants who entered the United States before age 16 and met the program’s other criteria were eligible to apply, suggesting that more than two-thirds did so at some point, according to the Migration Policy Institute. Currently, slightly more than 600,000 hold DACA status — many older DACA recipients married Americans and obtained green cards while others chose not to renew, in part because it costs $495 to apply each time, and they predicted that the program would be ended by the courts.

Where does DACA stand now?

The Department of Homeland Security cannot process new applications, in accordance to the latest court order. Immigrants currently enrolled in the program, most of whom were brought to the United States as children, retain the ability to stay and work in the country, though those protections could evaporate if the government is unable to satisfy procedural shortcomings that the court has raised. The Biden administration has issued new rules to address those concerns.

The appeals court is likely to rule this fall, and unless Congress steps in with a legislative remedy, the ultimate legality of DACA is almost certain to be decided by the Supreme Court next year.

President Biden moved to strengthen the DACA program on his first day in office. But the court ruling in Texas introduced uncertainty anew for the hundreds of thousands of people who have been able to raise families, buy homes and work at jobs in their fields of study.

“While DACA itself has really been life-changing for those who have received it, at the same time it is a type of protection that is tenuous,” said Shoba Sivaprasad Wadhia, a legal scholar who has written two books about immigration policy.

“As we think about durability and the long-term plan to allow Dreamers to thrive, that has to include a solution that goes beyond DACA,” Ms. Wadhia said.