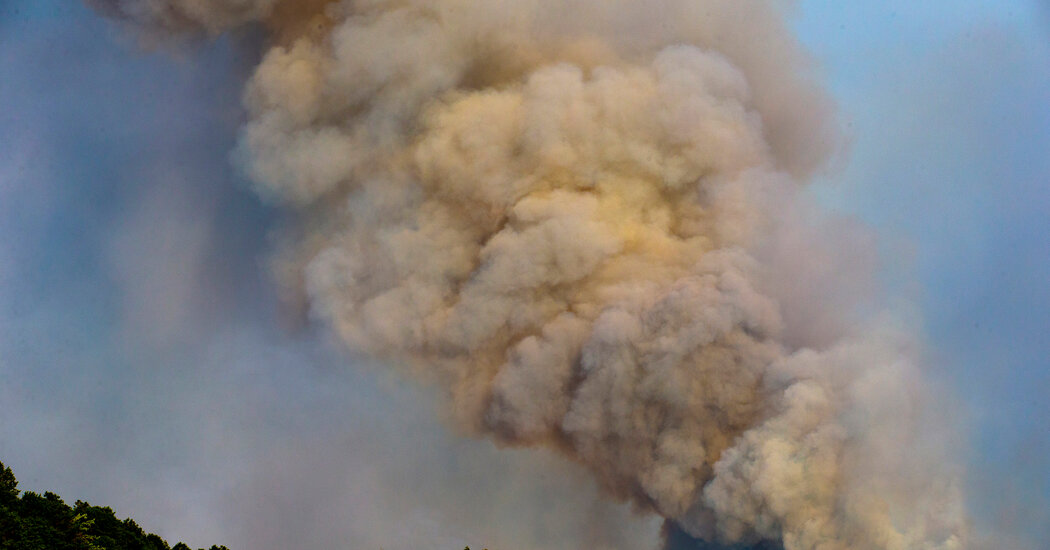 A fast-moving wildfire in a remote section of a state forest in New Jersey was threatening to become the state’s largest fire in 15 years, officials warned on Monday.

The blaze, called the Mullica River fire, had burned about 12,000 acres in Wharton State Forest and was 70 percent contained as of Monday night, officials said. The forest, in South Jersey, is about 30 miles northwest of Atlantic City.

No injuries were reported, but 18 structures, including several farms and campgrounds, were threatened by the fire, officials said. They also said they had ruled out natural causes in their investigation.

“I think it’s important to reflect on the fact that the majority of our forest fires are human caused,” Shawn LaTourette, the New Jersey Environmental Protection commissioner, said Monday during a news conference. He noted that illegal campfires that are not fully extinguished posed a risk.

Gov. Phil Murphy said on Twitter that he was grateful for crews who were working around the clock to contain the blaze.

While weather conditions were dry and sunny on Monday, slightly above average temperatures and increasing humidity were forecast across the area for Tuesday. A better chance of precipitation was expected Wednesday.

The fire was first detected Sunday morning, but immediate efforts to suppress it were ineffective because of its remote location, which was difficult to access, Chief Gregory McLaughlin of the New Jersey Forest Fire Service said during Monday’s news conference.

In the Western United States, wildfires are increasing in size and intensity and wildfire seasons are growing longer. Recent research has suggested that heat and dryness associated with global warming are major reasons for the increase in bigger and stronger fires.

Peak wildfire season in New Jersey is from mid-March through May, according to the state’s Department of Environmental Protection. About 7,000 acres of the state’s forests are damaged or destroyed each year by an average of 1,500 wildfires.

The Warren Grove fire in May 2007 was one of the largest forest fires in the state’s history, consuming more than 17,000 acres and destroying four homes. That fire was caused by flares dropped by a National Guard pilot.

Aerial video of the Mullica River fire on Monday showed thick plumes of smoke rising above the forest.

Miles away on the Jersey Shore, some beachgoers told ABC 6, a television station in Philadelphia, they saw hazy conditions, with one woman saying it smelled like “overactive barbecue smoke.” At least one man reported seeing ashes on his vehicle.