Will One Moldy Berry Ruin the Rest? 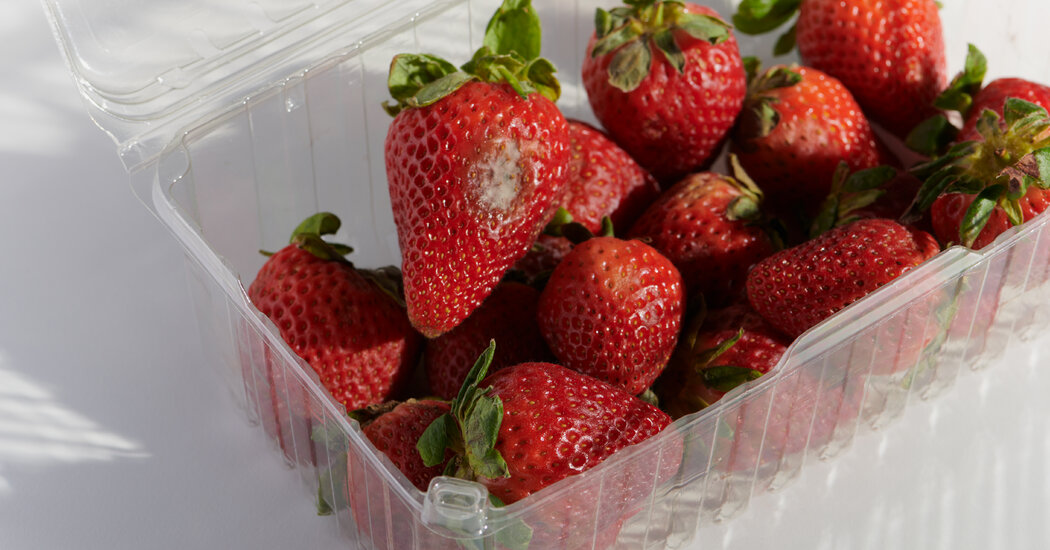 Q: If I open a box of berries and one berry is moldy, do I need to throw out the whole box?

Fresh strawberries, blueberries and blackberries are among America’s favorite fruits, but their goodness can be fleeting. Within a few days of bringing them home from the farmer’s market or grocery store, it’s common to find that some gray or white fuzz has staked a claim to a berry or two, prompting many to wonder: Are the rest safe to eat?

Food safety experts say that while you shouldn’t eat berries that are obviously moldy, those without visible signs of the spores are fine to eat. And luckily, unlike other food safety concerns that may be invisible to the naked eye, berries with mold growth are easy to spot, said Benjamin Chapman, a professor and food safety specialist at North Carolina State University. (Botanically minded readers may note that many fruits commonly known as berries, including strawberries, raspberries and blackberries, aren’t true berries, but we will describe them as such for the sake of simplicity.)

If his basket or clamshell is tainted by one or two moldy berries, “I don’t throw out the whole thing,” Dr. Chapman said. Instead, he tosses the moldy ones and carefully inspects adjoining berries for fuzz, which often appears around a bruise or the site of stem attachment. With the rest, he tries to eat them soon, because lingering mold spores may spread and develop more fuzz in a day or two.

Molds are a type of fungi that, when viewed under a microscope, often “look like skinny mushrooms,” according to the U.S. Department of Agriculture. They grow threadlike roots that invade the interior of the food, and tiny stalks topped with spores on the surface. Certain types of molds produce toxins that can be harmful if eaten, and in some people, molds can trigger allergic reactions, Dr. Chapman said.

The good news for berry eaters is that the molds commonly found on them “are actually not known to produce toxins, like some fungi do, and so there’s less risk,” said Elizabeth Mitcham, a professor and director of the Postharvest Technology Center at the University of California, Davis. Foods that have been found to grow these more dangerous molds include nuts, grains and apples, she said.

Because molds on berries are usually innocuous, even accidentally eating a moldy berry — though not recommended — would be unlikely to make you sick, Dr. Mitcham said. Also, “you would probably spit it out before you managed to swallow it,” because moldy berries “have a very off, very bad flavor,” she added.

Mold is a common enemy of berry growers and sellers, so it’s not surprising to find it in your berry basket, Dr. Mitcham said. Mold spores are ubiquitous in the environment; they can be carried by air or water and live in the soil of farm fields. The spores typically infect a berry plant’s flowers or fruit and then lie dormant until the fruit fully ripens. Given enough time, those spores will eventually germinate and can spread to adjoining fruits, especially in warmer temperatures, Dr. Mitcham said.

Molds become more dangerous when they grow and invade deeper into the food product, where some types produce toxins. While this isn’t usually a problem with berries because of their shape, small size and the types of molds that grow on them, it is a greater concern with larger foods that are moist or have a soft or porous texture, like leftover meats or casseroles, jams and jellies, soft cheeses and breads. If there is mold on the surface of these foods, you should assume they are contaminated within and throw them away, according to the U.S.D.A.

Before buying berries, inspect them carefully and avoid purchasing any with even slight signs of mold, Dr. Chapman said. At home, do another quick check and remove any fruit that is visibly moldy; then refrigerate the rest as soon as possible, Dr. Mitcham said. Don’t wash berries until just before you plan to eat them or cook with them, because moisture encourages mold growth, she added.

Mold spores can settle and survive on surfaces, so it’s a good idea to clean your fridge regularly “to break the mold spore cycle,” Dr. Chapman said. The U.S.D.A. recommends cleaning the inside of your fridge with a tablespoon of baking soda dissolved in a quart of water every few months. And if you discover food that’s “egregiously moldy” in your fridge, you might decide that “Yep, today’s the day that I’m going to clean it out,” to prevent too many spores from making themselves at home and spreading to other foods, he added.

Alice Callahan is a health and science journalist.