Winning When Trump Is Against You: A How-To Guide 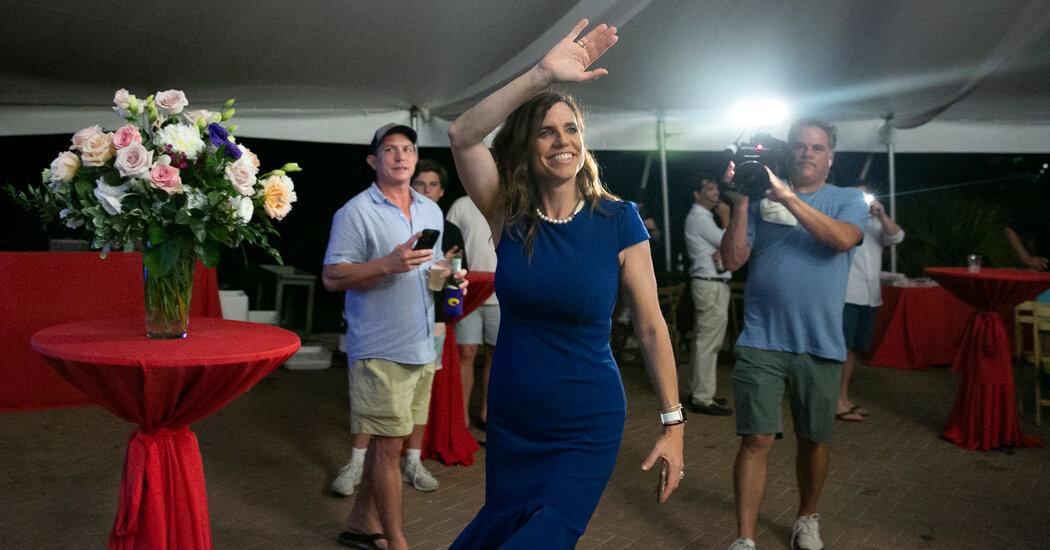 Are you a Republican who broke with Donald Trump but hope to win your upcoming primary?

Maybe you said that Joe Biden is the duly elected president, condemned Trump’s demagogy on Jan. 6 or merely suggested that he tone down his social media posts.

This handy guide is for you.

So far, Trump’s preferred candidates have won primaries for Senate seats in Georgia, Ohio, North Carolina and Pennsylvania. One of those candidates, J.D. Vance, overcame his past comments ripping Trump as “cultural heroin” by undergoing a wholesale reinvention of his political persona.

Others, like Gov. Brian Kemp and Secretary of State Brad Raffensperger of Georgia, have defied him and survived, without such a radical about-face.

So what explains why some Trump critics succeed and others don’t? Here, based on a review of the results of this year’s primaries and conversations with roughly a dozen Republican strategists, are a few lessons:

1. Do not vote to impeach him.

This much is clear at the midway point of this year’s election calendar: The Republican base regards having voted to impeach Trump as the ultimate act of betrayal.

The former president has already induced the retirements of four of the 10 House Republicans who supported his impeachment in 2021, while helping to oust another — Representative Tom Rice, who lost his coastal South Carolina seat on Tuesday by more than 25 percentage points.

One impeacher, Representative David Valadao, is clinging to second place ahead of a Trump-friendly challenger in his district in California, where the top two vote winners of any party move forward to the general election.

Four others — Representatives Liz Cheney of Wyoming, Jaime Herrera Beutler and Dan Newhouse of Washington, and Peter Meijer of Michigan — have yet to face the music.

Only one of the seven Republican senators who voted to convict Trump over Jan. 6 is running for re-election this year: Lisa Murkowski of Alaska. In her case, a new voting system engineered by her allies could help her fend off a challenge from Kelly Tshibaka, a former federal government official who has the former president’s backing.

Representative Nancy Mace of South Carolina, who did not vote to impeach Trump, made the former president’s enemies list for criticizing him on television after the events of Jan. 6, 2021. He called her a “grandstanding loser” and mocked her for filming a video praising him in front of Trump Tower in New York.

But she never got fundamentally out of step with the South Carolina Lowcountry, a libertarian-leaning area with a history of electing iconoclastic lawmakers. Mace grew up in Goose Creek, just outside Charleston. That local familiarity gave her an intuitive feel for navigating issues like offshore drilling, which is unpopular in the coastal region.

“She did a much better job of staying aligned with her district,” said Mick Mulvaney, a former South Carolina congressman who was White House chief of staff during Trump’s first impeachment.

Rice, by contrast, “almost took the attitude to dare people to throw him out,” Mulvaney said — standing emphatically by his impeachment vote despite representing a district that Trump won by more than 18 percentage points in 2020.

The backbone of Rice’s district is fast-growing Horry County, a historically conservative region filled with “angry retirees,” according to Chip Felkel, a Republican strategist based in Greenville.

But just down the coast in Mace’s more upscale district, Trump outperformed his approval ratings in 2020 — a sign, Felkel said, that there are “a lot of people who like Trump’s policies but don’t like Trump.”

3. Speaking of which: Don’t break with the base on policy.

Mace has been described as a moderate, but that’s a misnomer: She holds a 95 percent lifetime rating from the Club for Growth and a 94 percent score from Heritage Action, two groups that gauge lawmakers’ fealty to conservative principles. Rice scored 83 percent on both indexes — dangerous territory in the deep-red Pee Dee region of South Carolina.

Although the Club for Growth stayed out of her race, Mace did benefit from $160,000 in spending from Americans for Prosperity, another conservative outside group funded by the Koch brothers. No national outside groups spent money on Rice’s behalf.

Even minor heresies, like Mace’s support for legalizing marijuana, underscored her carefully cultivated image as an independent thinker and gave her a useful measure of distance from Trump.

4. Run against a weak opponent.

Russell Fry, the state representative who defeated Rice on Tuesday, was a known quantity in the state who happily played the part of a generic pro-Trump Republican.

Katie Arrington, a former state lawmaker and Pentagon official who won Trump’s endorsement against Mace despite his private doubts about her candidacy, is another story.

Voters certainly heard about the former president’s preference: At least 75 percent of voters in the district were aware that he had endorsed Arrington, according to the Mace campaign’s internal polling.

But Mace and her allies pummeled Arrington with ads accusing her of voting to raise gasoline taxes as a member of the state legislature, noting that her security clearance had been suspended while she was a defense official in the Trump administration and calling her “just as bad as Biden.”

Mulvaney, who campaigned for Mace, noted an additional factor: that Arrington had lost the district to a Democrat in 2018.

“Trump doesn’t like losers, and that’s what Katie was,” Mulvaney said.

5. Get yourself a strong local surrogate.

Although Arrington had Trump in her corner, Mace had the backing of Nikki Haley, a popular two-term former governor of South Carolina and United Nations ambassador under Trump who now lives in the district.

It proved enormously valuable. Like Mace, Haley has toed a careful line toward Trump, criticizing him on occasion but never fundamentally breaking with her former boss. She has an 82 percent approval rating among South Carolina Republicans, according to a poll conducted in May, just a few points below Trump.

Haley raised more than $400,000 for Mace and appeared at two of her campaign rallies, in addition to recording get-out-the-vote videos and robocalls and sending texts. She also cut a television ad calling Mace “a fighter,” a “strong, pro-life mom” and a “tax-cutter” that ran for six weeks, airing 446 times in two ad markets. Mace’s campaign also mentioned Haley’s endorsement in its closing TV spot.

Rice made the puzzling decision to invite Paul Ryan, the former House speaker, to stump for him in the closing weeks of the campaign. Ryan, who tangled often with Trump before quitting politics to join the board of Fox News and starting a small think tank, hails from Janesville, Wis. — more than 800 miles from Myrtle Beach.

Why are these midterm races so important? This year’s races could tip the balance of power in Congress to Republicans, hobbling President Biden’s agenda for the second half of his term. They will also test former President Donald J. Trump’s role as a G.O.P. kingmaker. Here’s what to know:

What are the midterm elections? Midterms take place two years after a presidential election, at the midpoint of a presidential term — hence the name. This year, a lot of seats are up for grabs, including all 435 House seats, 35 of the 100 Senate seats and 36 of 50 governorships.

What do the midterms mean for Biden? With slim majorities in Congress, Democrats have struggled to pass Mr. Biden’s agenda. Republican control of the House or Senate would make the president’s legislative goals a near-impossibility.

What are the races to watch? Only a handful of seats will determine if Democrats maintain control of the House over Republicans, and a single state could shift power in the 50-50 Senate. Here are 10 races to watch in the House and Senate, as well as several key governor’s contests.

When are the key races taking place? The primary gauntlet is already underway. Closely watched races in Pennsylvania, North Carolina and Georgia were held in May, with more taking place through the summer. Primaries run until September before the general election on Nov. 8.

Go deeper. What is redistricting and how does it affect the midterm elections? How does polling work? How do you register to vote? We’ve got more answers to your pressing midterm questions here.

Although Trump held telephone events for Arrington and brought her onstage at his MAGA rally in Florence, a city in Rice’s district, he never showed up in the Lowcountry.

“There’s always negatives with an endorsement,” said Terry Sullivan, a longtime Republican strategist, who added that taking full advantage of the potential upside of Trump’s imprimatur requires vigorous negotiation and careful planning. “You’ve got to work to get the positives.”

A dead heat in Pennsylvania

We might need to find a stronger word than “headwinds” to describe the economic forces blowing against Democrats in the midterm elections this year.

On Monday, the stock market fell by 3.9 percent, heralding a bear market, as my colleagues explained in yesterday’s DealBook newsletter. That came as investors braced for the Federal Reserve to raise interest rates, which it did on Wednesday by a stunning three-quarters of a percentage point, the biggest such move since 1994.

With inflation still rising at an 8.6 percent clip, it all sounds like a toxic political brew for the party in power.

So it’s not a complete surprise that one of the country’s most closely watched and potentially consequential governor’s races, in Pennsylvania, looks like a dead heat.

A USA Today/Suffolk University poll out this morning shows the contest to be within the margin of error. Attorney General Josh Shapiro, the Democratic nominee, leads Doug Mastriano, a Republican state senator and retired Army colonel, by 44 percent to 40.2 percent among likely general election voters, with 12.8 percent undecided. The margin of error for the poll was plus or minus 4.4 percentage points.

Yes, it’s just one survey. Polling averages are more reliable. But those numbers are comparable, I’m told, to the Shapiro campaign’s internal polling.

Shapiro’s team fully expects a close race, but there’s an important dynamic here to watch. Should the race remain close, national Republican groups have signaled, they intend to spend money on Mastriano’s behalf. That could eat into Shapiro’s overwhelming financial advantage and allow Republicans to project a more mainstream image of their candidate than he presents himself.

Mastriano has taken some extreme positions. He favors a ban on abortion with no exceptions for rape or incest, and has openly embraced the QAnon conspiracy theory. And he has been a leading figure in Donald Trump’s drive to overturn the results of the 2020 election — proudly promoting his presence at the Capitol on Jan. 6, 2021. The House panel investigating the Jan. 6 riot has subpoenaed him.

On Monday, Mastriano named Jenna Ellis, a former lawyer for the Trump campaign who was intimately involved in the effort to toss out Joe Biden’s victory, as a senior legal adviser.

Then on Tuesday, NBC News reported that Mastriano had told an interviewer that he saw “parallels” between the federal government’s prosecution of suspects in the Jan. 6 riot and the Nazis’ use of the 1933 Reichstag fire to crack down on dissent and seize unrestricted power in Germany.

Hitler analogies are rarely a good idea in American politics, and that particular comparison is not one that historians are likely to find credible. But with many voters experiencing serious economic distress, Mastriano’s poll numbers ought to be sobering for Democrats all over the country.

Is there anything you think we’re missing? Anything you want to see more of? We’d love to hear from you. Email us at onpolitics@nytimes.com.